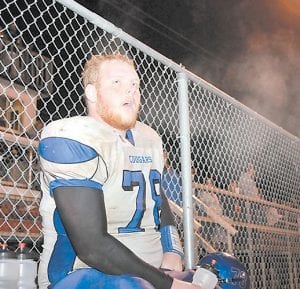 Letcher Central’s record fell to 1-7 on the season but more importantly 0-2 in district play after a 41-22 loss at Perry County Central in Hazard.

The Cougars were lifeless in the first half and found themselves trailing 35-0 at the break. LCC awoke from their midseason slump and outplayed the Commodores on both sides of the ball in the second half to make the score more than respectable and give Cougars fans a glimpse of the success this team can have in the near future.

LCC received the ball first and came out in a no huddle attack that they hadn’t showed in weeks. Cougar running back Chris Tyree had two rushes to begin the game for 19 yards. Then facing 3rd and 6, Tyree took a pitch around the left side for an 18-yard gain and first down in Perry Central territory. The drive stalled there and Zane Blair had a perfect punt that was downed at the Commodore 10-yard line.

LCC defensive lineman Willie Smith tackled Perry Central quarterback Austin Pray in the backfi eld on first down. On 3rd and 9, Pray tried to scramble for the first down but linebacker Keith Boggs tackled him just short. The punt was not good and the LCC offense started their next possession at the Commodore 38-yard line. The Cougar ground game gained one first down but then facing 4th and 7, LCC went for it and tried a wide receiver screen that never materialized and the Cougars turned the ball over on downs.

On the first play of the Perry Central drive, Austin Pray completed a pass to receiver Darryl Beatty on a hitch route. He proceeded to break two tackles and go 85 yards for the score. The twopoint conversion was good to give the Commodores an 8-0 lead with 4:21 left in the first quarter.

A great return by Tyree was nullified by a block in the back penalty. On 3rd and 11, Cougar quarterback Zane Blair found receiver Josh Boggs on a deep post for a 33-yard gain to get into PCC territory. After a false start penalty, Blair connected with Houston Watts for a 10-yard gain. On 4th and 5, Blair completed a pass to Keaston Hall for 12 yards and gave LCC a 1st and goal from the Commodore nine-yard line. Letcher Central couldn’t punch it in and were stopped on the two-yard line on fourth down as time expired in the first quarter.

Perry Central quickly moved the ball down the field and on 3rd and long Austin Pray connected with Beatty for a 24-yard touchdown. The extra point was wide left to keep the score at 14-0. LCC started at its own 14-yard line and on second down Nathan Pray, who is a younger brother of Austin Pray, intercepted a pass and took it to the house. The extra point sailed threw the uprights to increase the lead to 21-0.

The Letcher Central offense went three and out and the punt went out of bounds near midfield. Two plays later the Commodores used an option pass and Austin Pray found receiver Tyler Fugate all alone for a 35-yard touchdown and just like that LCC was down 28-0.

Nathan Pray struck again on defense. This time he made a onehanded interception on a wellthrown ball to give the ball back to the Perry Central offense at midfi eld. Austin Pray connected with Beatty for their third touchdown connection of the first stanza to make the score 35-0 heading into the break.

In the first half, Zane Blair had nine completions out of 17 attempts for 103 yards. Chris Tyree carried the ball 11 times for 56 yards. Houston Watts had three receptions for 21 yards and Willie Smith led the defense with five tackles including two tackles for loss. The Cougars moved the ball on offense but simply couldn’t score points once they got in the red zone, but that all changed in the second half.

Perry Central started the second half with possession of the ball. Josh Boggs had a tackle for a loss that forced a third and long that PCC couldn’t convert and the Commodores had to punt for the first time in the game. The Cougar offense went three and out once again and Perry Central quickly moved the ball into the LCC red zone. Facing 4th and 10 from the Cougar 19-yard line, LCC defensive lineman Nick Mullins sacked Pray and got the ball back to the offense. Two plays later Blair used play action to find Keaston Hall for a 49-yard bomb that Hall took in for the score. The two-point conversion was no good and with just under four minutes left in the third quarter LCC had cut the lead to 35-6.

The Cougar defense stood strong once again when on 4th and 3 Perry Central went for it and Stephen Fox came on a safety blitz and sacked Pray. The Cougars turned it over on the first play of the drive. Perry Central was driving for a score when LCC linebacker Keith Boggs forced a fumble and scooped it up and took it to the Perry Central 38-yard line. Tyree took a swing pass from Blair and refused to go down, carrying numerous PCC tacklers with him for a 22-yard gain. That play led to a Blair five-yard touchdown pass to Ryan Alzuraqi on the first play of the fourth quarter. Hunter Hall ran in the two-point conversion to make the score 35-14.

On 3rd and 20, Perry Central quarterback Austin Pray was flushed from the pocket and while running was stripped of the ball. Darryl Beatty was Johnny on the spot and not only recovered the fumble, but scooped it up and ran for a first down. The drive was capped off by a Nathan Pray four-yard touchdown run. The extra point was no good but the lead had risen to 41-14 in favor of Perry Central.

Tyree had an excellent 47-yard return that took the ball into Commodore territory. Tyler Fugate intercepted a pass on a fade pattern and Perry County Central quickly moved the ball into LCC territory. That is when Willie Smith made the play of the game for the Cougars. Smith recovered a fumble and the 300-plus-pound lineman showed his athleticism as he outran everyone on his way to a 76-yard score. Hunter Hall ran in the two-point conversion to make the final score 41-22 in favor of Perry Central.

The Cougars came out of the halftime locker room and looked like a totally different team. The defense played their best half of the year and the offense showed the big play capability they had early on in the season. Blair finished the game completing 15- of-27 attempts for 197 yards and a touchdown. Chris Tyree ended the game rushing for 62 yards and he caught four passes for 37 yards. Keaston Hall led the Cougars with 74 yards receiving on three catches and a score.

Willie Smith had his coming out party on the defensive side of the ball. Smith had eight tackles including two for a loss and scored a touchdown on a fumble return. Nick Mullins and Stephen Fox had a sack apiece and the defense only allowed five first downs the entire second half.

Hopefully the Cougars can build on their second half performance and play just as well when they host Whitley County on senior night at home Friday night. Kickoff is at 7:30 p.m. at Ermine so come out and support LCC as they try to get a much needed district victory.