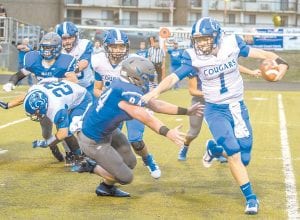 Letcher Central’s Carson Adams tried to stay out of reach while running the ball in the Cougars’s opening week loss to Shelby Valley on the road. (Photos by Chris Anderson)

The Letcher County Central Cougars will look to even up their record when they travel to Bourbon County and play the Colonels in the Dan Cummings Bourbon Bowl this Saturday night at 8.

The Cougars’ 2019 season began last Friday with a hard fought 44-22 loss at Shelby Valley in a game that was much closer than the final score would indicate.

The Cougars tied the score at 22 late in the third quarter, but Shelby Valley quarterback Dalton Meade proved to be too much in the fourth quarter and the Wildcats pulled away late in the contest for the victory.

“It was a very physical game, they made the plays in the fourth quarter and we didn’t and that was the difference,” Letcher Central Coach Junior Matthews said.

LCC got the ball to start the game, but a three-and-out gave the ball to Shelby Valley at midfield after the punt. After the Wildcats drove the ball to the red zone, LCC’s defense stepped up and cornerback Wyatt Ison made a great tackle on a wide receiver screen to force a turnover on downs. However, the Cougars’ offense couldn’t move the ball and punted again. 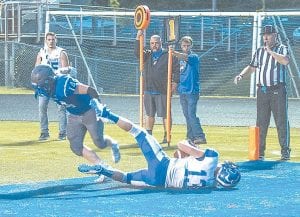 Letcher Central’s Zach Hensley falls to the ground in the end zone with control of the ball to put up two extra points in Friday’s opening week matchup at Shelby Valley.

On the first play after the punt, Shelby Valley’s Jayden Newsome took the handoff around the right side of the line for a 44-yard touchdown run. Meade, the quarterback, ran for a two-point conversion to give the Wildcats an 8-0 lead.

On LCC’s next possession, Hunter Campbell had an 11-yard run to just past midfield, after which Alex Blair took a handoff on a counter play and ran 48 yards for a touchdown that cut the lead to 8-6. The conversion attempt failed.

Shelby Valley quickly answered with a 52-yard touchdown run straight up the middle by Meade. LCC defensive tackle Jackson Meade blew up the rushing attempt for a two-point conversion, keeping the score at 14-6.

With the Cougars again in possession, Hayden Brashear ran for a 15-yard gain on a fullback dive before converting a run on fourth and short to keep the LCC drive alive at the Shelby Valley 27-yard line. A holding penalty on the Cougars bogged the drive down and LCC turned the ball over on downs midway through the second quarter.

Shelby Valley had a long touchdown run by Meade called back due to a penalty. On the next play LCC lineman Jepatha Griffith ripped ball away from Newsome and returned it to the LCC 42. After a Brashear 44-yard run up the middle, Dale Webb scampered 15 yards to move the ball to the Shelby Valley 1-yard line. On the next play Brashear ran the ball into the end zone for another six points. Quarterback Carson Adams connected with Zach Hensley on an out route for a two-point conversion to tie the game at 14.

With Shelby Valley now in possession of the ball, LCC’s Zach Hensley made a key tackle for a loss to thwart a scoring chance and keep the score 14-14 at halftime.

To begin the second half, Shelby Valley conducted a methodical 14-play, 72-yard drive — capped off by a Meade four-yard touchdown run — to retake the lead, 22-14, after a successful two-point attempt.

Brashear got LCC’s next drive started with a 12-yard run. Adams narrowly avoided a sack and then broke two tackles on his way to a 17-yard scramble. Two plays later, Brashear scored on a four-yard run and Adams ran in the two-point conversion to tie the game at 22 late in the third quarter.

On the second play of the fourth quarter, Shelby Valley’s Meade sprinted up the middle for a 28-yard touchdown run. The two-point conversion was again successful to give Shelby Valley a 30-22 lead.

The Cougar offense went three and out, after which Meade quickly marched the Wildcats down the field on a drive that ended with his fourth rushing touchdown of the game, increasing the Wildcats’ lead to 38-22.

On the ensuing drive, LCC threw an interception and Shelby Valley tacked on one more touchdown to make the final score 44-22.

Despite the loss, Letcher Central showed great resolve with three scoring drives to answer Shelby Valley scores before succumbing in the fourth quarter to the Wildcat rushing attack led by Meade, who rushed for 373 yards on 28 carries.

Hayden Brashear, who carried the ball 11 times for 94 yards and two touchdowns, led the Cougars’ offense. Alex Blair carried the ball four times for 58 yards and a touchdown. Carson Adams gained 38 yards on five carries. Zach Hensley had 17 yards on five attempts and caught a two-point conversion from Adams. LCC runners gained a total of 237 yards.

LCC’s defense was led by senior Jayson Buttrey’s 16 tackles, including two for loss. Sam Little had 13 tackles. Wyatt Ison had 10 tackles, and Jepatha Griffith had nine tackles and a forced fumble and recovery.

Bourbon County won its first game of the season, downing East Jessamine, 17 to 6, in the VisitJessamine.com Bowl.

The Dan Cummins Bourbon Bowl begins at 6 p.m. Friday, with a match featuring Frankfort and Paris. Dan Cummins, the bowl’s sponsor, is an auto dealership based in Paris.