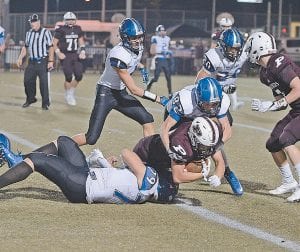 The Letcher County Central Cougars fell to defending state champion Pikeville by a score of 30-6 in the Pike County Bowl late Friday night.

The final score was not indicative to how close the game was until just before halftime.

Pikeville started at its own 22-yard line after the kickoff. On 3rd and six quarterback Wyatt Battaile connected with running back Evan Rhodes on a pass for an 11-yard gain. Then Battaile threw a slant pattern to Jon Ray for a gain of 12 yards and another first down. Three plays later on 4th and three Rhodes took a handoff up the middle for a gain of six yards. A play later a LCC pass interference penalty in the end zone gave Pikeville a first down at the Cougar 13 yard line. Letcher Central defensive back Tannar Lucas had a diving pass breakup in the end zone on third down to force 4th and three from the six yard line. Rhodes gained just enough yardage on his run to get the first down. On the next play Clay Slone took the direct snap and scored from three yards away. Rhodes made the two-point conversion and Pikeville used a 16-play, 78-yard drive to take an 8-0 lead with 3:58 left in the first quarter.

Letcher Central started its first offensive drive of the game at the LCC 20- yard line. On 2nd and eight quarterback Nick Sergent completed a nine-yard pass to Lucas for a first down. Then running back Quade Adams had consecutive runs of five and seven yards to get the ball to the 43 yard line. Facing 3rd and long, Sergent threw a perfect bomb to Lucas for a 44-yard gain down the sideline. The offense sputtered from there with three straight negative plays leading to a turnover on downs and the end of the first quarter.

Slone caught a 26-yard screen pass from Battaile to move the ball into LCC territory. Cougar defensive tackle Tristan Polly made a sack to force a 3rd and long for Pikeville. On the next play linebacker Logan Fisher stayed at home on a middle screen play and made a five-yard tackle for loss. An incomplete pass on fourth down turned the ball over on downs at the LCC 27 yard line.

Facing fourth down on the first series, upback Tyler Isaac took the snap out of punt formation and fought his way to gain just enough yardage for the first down. Sergent scrambled for a five-yard gain three plays later on fourth down. LCC couldn’t convert. The next time the Cougars went for it on fourth down and Pikeville got the ball at the LCC 41 yard line.

The Cougar defense stood strong with a sack by Avery Stamper and a pass deflection by Tyler Boggs to force a Panther punt.

Slone made a diving interception on a deep pass on the first play of the LCC drive.

Slone caught a 16-yard pass from Battaile to get the drive started. Before the Panthers could run a 4th and nine play from LCC territory, the Cougars got an unsportsmanlike conduct penalty, which gave Pikeville a first down at the LCC 19 yard line. On the next play Slone took a pitch around the right side of the line and went untouched for a touchdown. The two-point conversion was successful to give Pikeville a 16-0 lead.

Sergent connected with receiver Blake Brashears for passes of 12 and 10 yards. However, the offense could get no further and time expired in the first half.

LCC got the ball first to start the third quarter and immediately punted. Pikeville receiver Andrew Mcnamee got behind the entire LCC defense on a fourth down play for a 40- yard touchdown reception from Battaile. The extra point was good to make the score 23-0.

Gage Isaacs had a 21- yard return for the Cougars, but the offense went three and out again.

On 3rd and 19 Rhodes got a carry on a delayed draw play and scampered for a 41-yard gain. The LCC defense strengthened once again and forced a turnover on downs inside the red zone .

Th e Letcher Central offense struggled again turning the ball over on down deep inside their own territory. Pikeville capitalized quickly with a three-yard touchdown run on a quarterback draw by Battaile on the first play of the fourth quarter. The extra point increased the lead to 30-0.

On 3rd and 22, Quade Adams caught a pass on an out pattern and cut it up field between two defenders for a 20-yard gain. Then Preston Maggard took the handoff on fourth down and gashed the defense for 15 yards. The offense couldn’t convert a fourthdown play three plays later and Pikeville got the ball near midfield.

Avery Stamper made his second sack of the game to force Pikeville to punt.

Kaleb Mullins came into the game at running back for LCC and gained 58 yards on nine straight carries to move the ball deep into Pikeville territory leading to a five-yard touchdown run by Jayson Buttrey with 35 seconds left. The two-point conversion was no good making the final score 30-6 in favor of Pikeville.

The Cougars stayed to their defensive game plan the entire game and held the vaunted Pikeville offense relatively quiet. Avery Stamper led the defense with 13 tackles and two sacks. Triston Polly controlled the line of scrimmage finishing the game with two tackles for loss and a quarterback sack. Kylar Sturgill had seven tackles including a tackle for loss. Leyton Polly and Tyler Boggs had six tackles a piece.

Letcher Central (1-1) will return to action at home Friday against rival Hazard (2-0).