Cougars hope to regroup during week off 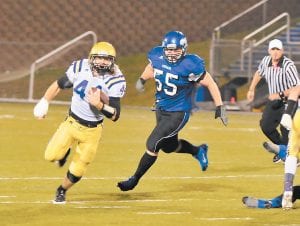 The scheduled bye week could not come at a better time for the Letcher County Central football team. The Cougars fell to visiting Somerset by a score of 42-7 last Friday night. The much needed break will give LCC Head Coach Mike Holcomb a chance to revamp some weak areas in the Cougar attack both offensively and defensively before the all important district opener at Harlan County on October 11.

LCC won the toss and elected to receive the opening kickoff last Friday, which was a touchback. On second down Hunter Hall caught a screen pass from quarterback Zane Blair for a 13-yard gain. Jaylyn Williams took a handoff on a jet sweep play for a nine-yard gain. Then Hall ran up the middle for four yards and the second first down of the game for the Cougars. The drive stalled at midfield and Blair’s punt on fourth down was downed at the Somerset 10-yard line.

Somerset Coach Charles Lucas must have watched tape from the LCC vs. Pike Central game when the secondary was gashed for huge plays down the field in the passing game. On the first play of the game, Briar Jumper quarterback Castle Hatcher hit receiver Cam Cheuvront on a go route for a 90-yard touchdown. The extra point was made to give Somerset a 7-0 lead with 8:36 left in the first quarter. 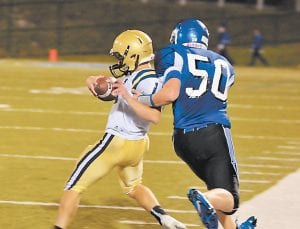 Letcher County Central junior Jacob Kiser pulled the Somerset ball carrier out of bounds early in the third quarter of the 42-7 loss to the Briar Jumpers.

The Letcher Central offense went three and out and Somerset got great field position after the punt was downed at midfield. Cougar defender Stephen Fox tackled the quarterback for a three-yard loss on an option play to force a third and long. The third down pass was incomplete. An almost perfect punt by Somerset backed LCC to its own five-yard line.

Castle Hatcher intercepted a pass on third and 13 and took it to the house for a 19-yard touchdown. The point after increased the Somerset lead to 14-0 late in the first quarter.

Jaylyn Williams had consecutive runs of five and then 10 yards to close out the first quarter, giving the LCC offense a much-needed first down. An incomplete pass on third and six forced yet another punt for the Cougars that went out of bounds at the Somerset 30-yard line.

Somerset running back Brycen McWilliams gained 35 yards on a draw play to quickly move the ball into LCC territory. Cougar defensive tackle Nick Mullins stopped the ball carrier behind the line of scrimmage on third and short to force a fourth down. The Briar Jumpers decided to go for it and a wide-open Cam Cheuvront dropped the pass for a turnover on downs.

Zane Blair had back-to-back runs of seven and four yards on quarterback keepers for a first down. Then Somerset committed a personal foul on a Hunter Hall carry to take the ball to the Briar Jumper 47-yard line. Williams gained eight yards on a toss sweep play and then Blair ran for a five-yard gain on a read option play for yet another first down. Three straight rushes netted seven yards for the Cougars and it was a no brainer to go for it on fourth down deep in Somerset territory. The Blair pass was just out of reach of receiver Houston Watts in the corner of the end zone and Somerset took over possession at the LCC 24-yard line.

On second down, three Cougar defenders had a chance to sack Hatcher in the backfield, but he bought just enough time to find Jordan Doan behind the secondary for a 74-yard touchdown. The extra point made the score 21-0 with 3:03 left in the first half.

Aaron Thomas had a good kickoff return to the LCC 40-yard line. On first down Blair found Williams on a swing pass for a 25-yard gain. The Cougar offense would not get any farther and turned the ball over on downs with under a minute left in the half.

On the third play, Hatcher found Cheuvront on a deep post pattern for a 44-yard touchdown that gave Somerset a 28-0 lead heading into halftime.

Somerset got the first possession of the second half. On third and 10, Hatcher rolled to the right and connected with his favorite receiver Cheuvront on an out route for 14 yards and a first down. Then the Briar Jumpers ran a sweep play to running back Jordan Doan who took it around the right tackle for an 18-yard gain. The drive culminated with a 21-yard touchdown run by Doan and with 8:35 to go in the third quarter the lead had ballooned to 35-0.

Freshman Quade Adams returned the kick to the LCC 31-yard line. Facing third and nine, Blair dropped back to pass and was hit by two defenders in the backfield. Blair broke both tackles and scampered up the middle for a 19-yard gain. Kyler Lucas gained six yards on a wide receiver screen and then Blair completed an eight-yard pass to Hunter Hall to move the ball to the Briar Jumper 34 yard line. The Somerset defense stiffened once again and stopped LCC on downs.

Jordan Doan got the first carry of the fourth quarter and burst threw the line of scrimmage and was caught from behind by a hustling Josh Boggs at the LCC nineyard line for a gain of 54 yards. Two plays later fullback Devin Griffith scored on a dive play. The extra point made it 42-0 in favor of Somerset.

LCC started at its own 17-yard line and on first down Blair gained 15 yards on a quarterback draw. The Cougars gained 30 yards on a catch and run by Houston Watts on the next play. Then Blair avoided a sack, rolled right and found a wide-open Kyler Lucas in the back of the end zone for a 27- yard touchdown. Dustin Holbrook made the extra point to make the final score 42-7 Somerset.

The Cougar offense simply could not finish a drive against the Briar Jumpers. They would easily move the ball into Somerset territory and then proceed to turn the ball over on downs after bogging down. The Briar Jumpers had too much speed at the skill positions on offense and also won the battle in the trenches, which was not a surprise since they are led on the Kagen Skidmore who stands 6’2” and weighs 285 pounds.

Zane Blair ran the ball 10 times for 58 yards and Completed 11 passes for 136 yards and a touchdown. Kyler Lucas led the receiving corps with four catches for 49 yards a score. Jaylyn Williams carried the ball nine times for 39 yards and a 25-yard reception.

Nick Mullins paced the defense with six tackles including two for loss. Triston Polly, Jacob Kiser and Stephen Fox each had five tackles a piece for a Cougar defense that must improve in limiting big plays as they move forward this year.

The Cougars have a bye week this week and then travel to Harlan County to face the Black Bears on October 11 at 7:30 p.m.