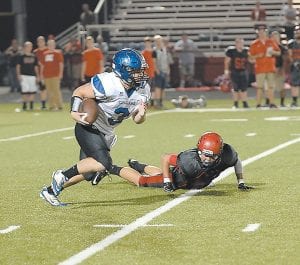 Gage Isaacs returned the opening kickoff 23 yards for LCC. On the first play Sergent found Tannar Lucas on a go pattern for a 71-yard touchdown. Jayson Buttrey made the extra point to give the cougars a 7-0 lead.

The Letcher Central defense quickly forced a three and out. Lucas fielded the punt and broke two tackles on his way to an 80- yard touchdown. Buttrey’s extra point split the uprights to make it 14-0 with 9:20 left in the first quarter.

Central (VA) fell on a squib kick at its own 40-yard line. On 3rd and six, quarterback Isaiah McManus threw a 17-yard fade pass to Harold Osborne. Two plays later on 3rd and short, Mc- Manus kept the ball and gained seven yards to the LCC 12 yard line. Blake Brashears deflected a pass away in the end zone to force a fourth down. McManus threw a pass to the 6’5” Osborne who came down with it for a 12- yard touchdown. The extra point was no good, but the lead had been cut to 14-6.

Letcher Central turned to its ground game on the next drive. Quade Adams gained seven yards on a sweep. Then Preston Maggard had a five-yard run for a first down. Three plays later on fourth and two, Maggard was stopped just short of the line to gain for a turnover on downs.

Central (VA) capped off an eight play, 45-yard drive with a Trevor Shoupe six-yard rushing touchdown up the middle. The score stayed at 14-12 with 9:48 in the second quarter after the twopoint conversion was no good.

On third and six, Sergent was sacked and Garrett Sergent had a 36-yard punt to midfield.

The Cougar defense forced a punt after a Christian Broderdorp tackle for loss. Central (VA) recovered a fumble on the punt at the LCC 15-yard line.

Cougar defenders Triston Polly and Avery Stamper had backto back sacks to force another punt with 1:18 left in the half.

The Letcher Central offense utilized their two-minute offense to perfection. Sergent threw an out route to Quade Adams for an 18-yard gain. Then after a pass interference penalty, Sergent found Brashears for a 32-yard reception. Sergent threw an 11- yard touchdown on a deflection to Lucas with six seconds left before halftime. The point after failed to give six LCC a 20-12 lead at the break.

Central ( VA) received the second half kickoff. After quickly getting into Cougar territory, LCC safety Leyton Polly intercepted a pass and returned it to the LCC 18 yard line.

Maggard had two straight hard nose runs of five and nine yards to start the drive. Then Adams got a handoff on a sweep and gained 11 yards. On third and 19 Brashears got behind the defender and caught a 44-yard pass from Sergent. Two plays later Adams ran it in from 11-yards out. The two-point conversion was no good but LCC increased its lead to 26-12.

LCC recovered a squib kick and quickly capitalized with a 29-yard touchdown from Sergent to Lucas. The extra point was blocked to keep the score at 32-12.

On fourth and 11 Central (VA) tried a fake punt but the LCC return team wasn’t fooled and stopped the ball carrier short of the line to gain.

On third and 13 Adams caught a pass and cut in between defenders for an 18-yard gain. Adams then caught a 12-yard touchdown from Sergent and the Buttrey extra point increased the LCC lead to 39-12.

After successive three and outs by both teams, McManus scrambled for a 53-yard touchdown run. The two-point conversion cut the lead to 39-20.

That would be the last score of the game and LCC went on the road for an impressive victory.

The offense and defense both played great as collective units in what was the best game of the year for the cougars. Nick Sergent completed 11 of 16 passes for 255 yards and four touchdowns. Tannar Lucas scored on all three of his receptions and had an 80-yard punt return touchdown. Quade Adams had 65 yards rushing and a touchdown. Adams also caught five passes for 59 yards and a touchdown. Preston Maggard gained 52 yards on 14 carries. Blake Brashears caught two passes for 76 yards.

The Cougars will host Breathitt County at Cougar Field this Friday at 7:30 p.m.