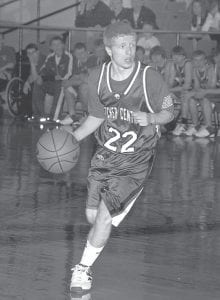 So now it is on to the 14th Regional Tournament for the Letcher County Central Cougars. The Cougars, which held on to defeat Cordia in the finals of the 53rd District Tournament, will travel to Perry County Central High School tomorrow night (Thursday) to open region play against Powell County. Tip-off is scheduled for 8:30 p.m.

Definitely one of the hottest teams in the region, Letcher Central has as good a shot as anyone to go to Rupp Arena for the Sweet 16. And who would have thought that after a 1-4 start.

Before earning the right to advance to the game against Powell County, the Cougars first had to take on the Cordia Lions in the championship game of the 53rd District. The two teams had split their regular season contests, both winning at home.

Cordia planned to go inside early to Josh Taylor, who answered the call and controlled the game for the Lions. The Cougars managed a trey from Devon Blair and a steal and lay-up by Malachi Longworth to tie the score 11-11 after one quarter. 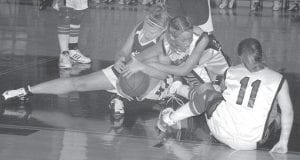 The Cougars built a 12-point lead early in the third on a bucket by Blair. The Lions, however, were hanging around and cut it to 7 on a trey by Zach Hurt, cutting the Cougars’ lead to 39-32 after three quarters. After Hurt scored again to pull the Lions to within 6, at 43-37 in the fourth quarter, Taylor scored inside to cut the margin to 43-39. If Taylor was covered he would kick it out to Hurt and the plan was working.

Letcher Central’s Charlie Banks picked up his fourth foul at the 6:02 mark and was still on the bench with 4:00 left. The Lions got a bucket by Mosley to pull within 2. After a turnover by the Cougars led to a lay-up by Hurt, the score was tied at 43. Banks re-entered the game and scored inside to put the Cougars back in front, 45-43. 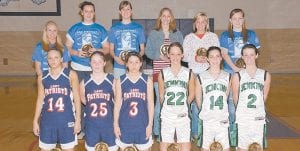 Reynolds then took over for the Cougars. He made a beautiful move on Taylor for a bucket to make it 47-43. After a trey by Mosley, Reynolds scored again to make it 49-46 with 34 seconds left in the game. The Cougars got the ball after a charge was called on Taylor, but Devon Blair missed the front end of a 1 and 1.

With the Lions having the ball with a chance to tie, the Cougars fouled Zach Hurt to prevent a trey. He made the first but missed the second, and the score was 49- 47. The Lions then fouled Malachi Longworth, but he also missed the front end of a 1 and 1. The Lions had a shot at the buzzer, but an off-balance attempt was no good and the Cougars are champions of the 53rd District in only the school’s third year of existence.

The Cougars improved to 19- 10 and sent the Lions home in second place. Letcher Central shot 62 percent on the night, hitting 22 of 35 shots and 5 of 9 treys. The Lions shot 52 percent, but made only 4 of 12 free throws. The Lions also advanced to the regional tournament, where they will meet Hazard tonight (Wednesday) at 7.

The Cougars were led by Jordan Reynolds and Devon Blair with 12 points, with Reynolds being the star of the night. He held his own against Taylor during crunch time and proved he can be a force inside. Blair hit 2 treys on the night. Charlie Banks finished with 11 points. Josh Proffitt hit two treys for 6 points and Malachi Longworth also hit for 6 points. James Gose rounded out the scoring with 2 points.

Blair, Banks, and Proffitt each was named to the 53rd District All-Tournament Team.

The stage was set in the 53rd District Tournament as the Letcher County Central Cougars took on the Crusaders of June Buchanan after winning the playin game against Jenkins. The Cougars had met the Crusaders twice this season, but came up on the short end both times. Although Letcher Central had led both games by double figures, June Buchanan found a way to pull a win out late in both games.

The Cougars were 17-10 entering the game while the Crusaders were struggling. June Buchanan had lost four of its last six games but were still the top seed in the 53rd District. At one point this season the Crusaders were 16-3 and champions of the WYMT Mountain Classic.

With fans filling the Knott County Central gym, the Crusaders controlled the opening tip with big 6’9″ Garrison Collins. Quickly, Trey Short scored and it was 2-0 Crusaders. Devon Blair answered for the Cougars with a big trey, but Short was fouled and made both and it was 4-3 JBS. A trey by Charlie Banks gave the Cougars the lead before Collins got a put-back to tie the score at 6.

Jordon Reynolds picked up his second foul for the Cougars and had to leave the game. With Letcher Central’s big inside man on the bench things didn’t look good, but the Cougars’ defense stepped up and answered the call.

After the Cougars got a steal, Blair hit a 15-footer. Charlie Banks then hit two free throws for a 10-6 Cougars lead. With Josh Proffitt and Charlie Banks both hitting treys (the second of the quarter for Banks) it was 16- 6 Cougars and the fans were going crazy.

The Crusaders closed the quarter on a 4-0 run which was capped off by a trey from Tate Cox to make the score 16-10 after one.

June Buchanan struggled all night from the free throw line as Collins opened the second quarter missing a pair. After Malachi Longworth hit an 8-footer and Banks scored over Collins, the Cougars’ lead stood at 20-12.

Collins came up with his fourth blocked shot of the half near the end of the second quarter, but the Cougars led 24-16 at the break as Banks scored again before the horn. Free throws were the difference at the half as June Buchanan made only 4-13 while the Cougars hit 2 of 2.

With Jordon Reynolds back in the game to open the second half, he quickly got a rebound for the Cougars and stuck it back in. Proffitt then nailed his second trey as the Cougars widened the margin to 11 points. Banks scored from inside to make it 32- 18. Another Reynolds put-back made it 34-19 as the Crusaders made one free throw during the stretch. The Cougars led 38-23 after three quarters.

The fourth quarter would see the Crusaders pull to within 10, but they would get no closer as the Cougars hit 20 free throws in the fourth quarter and put up a total of 33 points to win a shocker, 71-59.

The Cougars were able to turn the 14th Region upside down, in part by holding the Crusaders’ probable All State guard Clark Stepp to 14 points.

The Cougars were led by Charlie Banks with 24 points and 9 rebounds. He was followed by Devon Blair with 19 points and 5 rebounds. Blair also hit 8 of 8 free throws, all of which came in the fourth quarter. Josh Proffitt scored 16 points and hit 3 treys. He was 7-7 on free throws in the fourth quarter and also came up with 6 big rebounds. Jordon Reynolds got five points while spending much of the night in foul trouble. Proffitt played huge early in the third quarter with 5 points to start the second half. Malachi Longworth finished with three points, and Eric Ison and McKenzie Smith both finished with 2 points. The Cougars hit 24 of 30 free throws while June Buchanan hit 15 of 29.

June Buchanan finished its season at 18-8 and said good-bye to high-scoring Clark Stepp. Stepp was fun to watch and will be missed, but the Crusaders have a solid nucleus left with Collins and Cox and Clark Stepps’s younger brother Clint all returning.

The Lady Cougars opened district play against cross-county rival Jenkins. The Lady Cougars had no problems earlier against the Lady Cavaliers as they dominated all three games and won one by 40. But this would be a different night and the introduction of Kaitlin Sexton, who is only a freshman, for Jenkins.

The Lady Cougars (9-17) led Jenkins (5-23) 13-12 after one quarter, but Sexton would heat up in the second quarter as she nailed her third and fourth trey. She hit her fourth at the buzzer and the Lady Cavaliers led 30- 24 at the half.

The Lady Cougars pulled within 2 in the third, but the Lady Cavaliers pulled back out by 7. The Lady Cougars cut it to 44- 43 on free throws by Sharaye Kincer, but Sexton’s sixth trey made it 50-46 with 1:23 left in the game.

The Lady Cougars finished at 9-18 on the season and were led by Sharaye Kincer with 18 points as she played super. Shannon Bays finished with 11 and Morika Begley had 10. Brittany Sexton finished with 4 and Cloe Wynn had 3 as did Lauren Thomas. Mica Boggs had 1.

The Lady Cavaliers moved on to the championship game against Knott County Central, but fell to the Lady Patriots, 68- 30.Jenkins played Perry Central at 8:30 Tuesday night in a 14th Region Tournament match-up at Powell County High School.