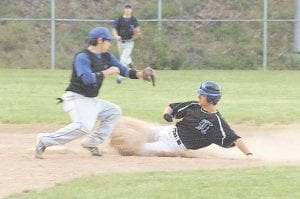 SAFE AT SECOND – Letcher County Central’s Matt Adams slid safely into second base during the Cougars’ win over June Buchanan on Monday. (Photo by Chris Anderson)

The Letcher County Central Cougars defeated June Buchanan on Monday, 6-2, to improve their record to 15-8 on the season. The Cougars are now in sixth-place overall in the 14th Region, but sport 7-1 record in region play while being a perfect 3-0 in 53rd Distict competition.

The Cougars were to host the Jenkins Cavaliers on Tuesday night, then play at Perry Central tomorrow (Thursday) and at Betsey Layne on Friday. Both games begin at 5:30.

Senior-heavy Jenkins (5-12- 1) was idle last week while many of the players went on the school’s senior trip. After facing Letcher Central, the Cavaliers were scheduled to visit East Ridge at 5:30 today (Wednesday), Pikeville tomorrow (also at 5:30), and Cordia on Friday. The Cavaliers will host Cordia and Menifee County on Saturday, with action beginning at 11 a.m.

Colton Cook had a double and a triple and 4 runs batted in in the Cougars’ May 1 home win against Cordia. Tanner Sexton had two singles, while Matt Adams and Tyler Dixon chipped in one hit apiece. Derek Walzer tripled and drove in a run. Sexton also stole three bases in the game.

Derek Walzer’s grand slam was the highlight of the first game of a May 2 doubleheader, and his seven RBI performance was enough to sink Buckhorn. Walzer was 3-3 for the game, with two singles to compliment his second inning slam. Each of the Cougar starters scored at least once and everyone had at least one hit.

Walzer wasn’t finished with his slugging in game one. In the first inning of game two, he connected on two-out, 1-0 pitch for a three-run homer. He also hit another single, bringing his total performance for the day to five for five with two homers, three singles, 10 runs batted in and five runs scored. Mike Watts and Nathan Adams had doubles in the game and Tanner Sexton had a multi-RBI game, driving in two runs.

Pike Central scored four runs in the third inning to take the lead before the Cougars scored nine in the fourth before adding six more insurance runs. McKenzie Smith went three for four with three singles and three RBIs. Nathan Adams drove in five runs with a single and two doubles.

Matt Adams had a single and double and three RBIs in the Cougars’ win over the Crusaders Monday night. Adams was two for two on the day, also drawing a walk. The Cougars led 2-0 in the bottom of the third before June Buchanan tied the game with five straight singles in the top of the fourth. The Cougars reclaimed the lead in the bottom of the inning with Mike Watts and Tanner Sexton scoring on Matt Adams’ double. Chase Adams had a single and a double, Aaron Wright hit two singles, McKenzie Smith and Tanner Sexton singled, and Colton Cook hit a triple.