Cougars look to be champs 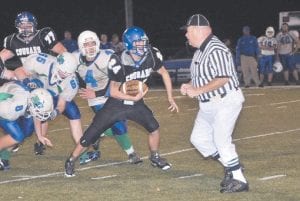 LOOK OUT, REF! — Letcher County Central senior running back Greg Collins broke away from the pack in the Cougars’ senior night win over North Laurel. See story, Page B1.

It was the final week of district play for the Letcher County Central Cougars this past weekend as the North Laurel Jaguars came to town for the last home game of the regular season for the Cougars.

The Cougars came into the game in a three-way battle for first place in the district. They were playing for everything while the Jaguars were playing for pride. It was Senior Night, and the Cougar faithful said good-bye to 17 seniors.

At 6-2 overall and 3-1 in district play, the Cougars wanted to send the seniors out on top, and what better way to do that than to beat the Jaguars and guarantee at least a share of the district title.

The Cougars were without one big gun as Jesse Rose was out with an injury. He has been a big force on both sides of the ball for the Cougars, and his presence was missed.

The Cougars kicked off to open the game, and the Jags started at the 20-yard line. On second down Jag quarterback Fugate threw a pass into the arms of big Ryan Hogg on the line for the Cougars and he got a big interception. 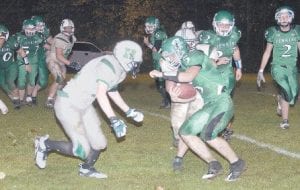 The Cougar offense wasted no time. Logan Johnson found Chase Adams open for 8 yards on a pass, he found Greg Collins for 12 yards and the touchdown with less than two minutes gone in the game. McKenzie Smith tacked on the extra point, and it was 7-0.

The Jaguars marched right back and moved inside the Cougar 29 behind Fugate and his receivers. The Jags are a solid running team but they can pass it as well, and it was working against the Cougars. They moved to the Cougar 18 behind Adrian Wardrup for a first down. Wardrup came into the game averaging 110 yards rushing a game.

The Cougar offense was unable to take advantage and punted the ball right back to the Jags. The punt was a missile as Nathan Maggard sent it 70 yards. It was almost downed at the 5-yard line, but it rolled into the end zone for a touchback.

The Jags moved almost at will out to the Cougar 47 at the end of the first quarter. Wardrup picked up 22 yards and moved to the Cougar 18. Wagers tacked on 10 more to the 8-yard line and a first-andgoal.

But then the Cougar defense said ‘that’s enough.’ McKenzie Smith had a huge hit behind the lines and, after another play for no gain, Fugate took the ball on a busted play and scored, but it was called back on a Jaguar penalty. With the ball back at the 20, the Jaguars were unable to convert on fourth down, and the Cougars had stopped another threat.

Again the offense for the Cougars could not move the ball as the rain started to fall and Maggard punted again. The ball was taken to the 47-yard line and the Jags started another drive. A pass to Shears at the Cougar 8-yard line set up a huge first down with four minutes in the first half.

Behind a strong running game the Cougars moved out to mid-field including 11 yards by big Ryan Hall. Logan Johnson picked up 19 yards on a keeper down at the Jag 30-yard line. The passing game took over from there. as Johnson found Greg Collins for 9 yards, and then Travis Stephens for 9 more. After picking up 7 yards on a run to the 5-yard line by Johnson, he hit Chase Adams in the end zone as Adams made a beautiful diving catch. The score moved out to 14-0 as Smith’s extra point was good. The score stood at the half.

The second half found the Cougars on offense and a fired-up Jaguar defense. On a third and 11 play, Johnson got picked off at the Cougar 41 and the Jaguars were in business.

Wardrup picked up yardage quickly with 13 on first down, and then down to the 10 after a Cougar penalty. He scored, finally, from 5 yards out and ran in the conversion, and the score was 14-8 with 8 minutes left in the third quarter.

Johnson and company came right back and got the Cougars down to the Jag 20 and on a fourth-and-15 play, he hooked up with Robbie Huff in the end zone and the Cougars had answered. The conversion by Huff was also good and the score ballooned to 22-8.

The Jags answered again on their next possession behind the passing game. After moving inside Cougar territory, Fugate found Rotundy at the Cougar 30- yard line and outran the defender to the end zone. The point after failed, and it was 22-14 at the end of three quarters.

The Cougars mounted another drive and moved to the Jag 32-yard line, but on a fourth-and-15 play, Johnson was picked off again down on the Jag 5- yard line. With their backs against the end zone the Jags were unable to move against a fired-up Cougar defense, and they had to punt from the back of the end zone.

Travis Stephens got a great return to the Jag 35 and after a Cougar penalty, Johnson took it up the middle for another Cougar score from 32 yards out, and a 29-14 Cougar lead with 5:35 left in the game.

With desperation setting in, the Jags took one play after starting at their 21-yard line. Fugate threw over the defense to Rotundy and he outran the defense 79 yards. The game was getting too close for comfort as the Jags moved within 9 at 29-20.

With time running out, the Cougars moved to the Jag 34 behind Drew Bentley and he picked up another 20 to get inside the Jag 2-yard line. Ryan Hall got the call and the Cougars had secured at least a share of the district crown.

The Jaguars’ final possession resulted in a McKenzie Smith interception.

The final was 36-20 as the Cougars moved to 7-2 overall and 4-1 in district play. With Perry Central getting trounced by Whitley County and Harlan County beating Clay County, it all comes down to the points system.

The Cougars beat Whitley and lost to Harlan County. The Cougars should be district champs when all is said and done, and they should get to hang around Ermine for the first couple of games of the playoffs.

But before that happens they will have to play their final regular season game at Louisville Moore Friday night.