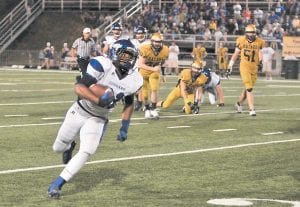 The Letcher County Central Cougars will travel to Pike County Central this week as they try to shrug off a heartbreaking loss on the road to the Hazard Bulldogs 26-21. Kickoff for the Friday night matchup in Pikeville is 7:30.

Against Hazard, LCC rallied at the end of the first half to take a one-point lead into halftime, but a combination of the offense failing to move the ball and terrible officiating resulted in the first loss of the year for the Cougars.

Letcher Central received the opening kickoff and quickly went three and out. Hazard started at its own 44-yard line after the punt. Hazard is led by junior running back Brandon Jones, who is 5’9” 240 lbs., and would rather run a defender over then run around him.

On the first play, LCC stuffed the line of scrimmage to take away the run but Hazard called the perfect play. The play action pass by quarterback Jacob Roll to Bulldog receiver Trey Higgins went for 46 yards. After a tackle for a loss by Letcher Central linebacker Jacob Kiser made it third and goal, Jones took a pitch and scored from six yards out by diving just inside the pylon. The extra point was good and Hazard found itself with a 7-0 lead early in the first quarter. 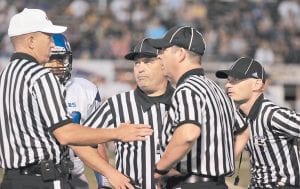 A Letcher Central player listened as referees discussed one of several calls that impacted the outcome of the game with Hazard. It was a “no call,” however, that ended the game with the Bulldogs winning by a score of 26-21. (Photo by Chris Anderson)

The Cougars returned the kickoff to the 25-yard line. An unsportsmanlike penalty had the Cougars facing 3rd and 19. LCC quarterback Zane Blair connected with wide-out Houston Watts for an 18-yard gain just short of the first down. LCC Coach Mike Holcomb decided to go for it from his own 34-yard line. Out of a goal line formation running back Hunter Hall ran right up the middle for a six-yard gain. On the next play Blair was flushed from the pocket and with a defender holding on he found Jaylyn Williams for a 23-yard gain into Hazard territory. Blair ran an option play to perfection, faking out a defender and keeping the ball for a 14-yard pickup. Blair threw a screen pass to Aaron Thomas for another first down. Holcomb rolled the dice again on 4th and 2 from the sixyard line and Williams scored on a run around the right side. Dustin Holbrook made the extra point and LCC tied the score with 3:04 remaining in the first quarter. 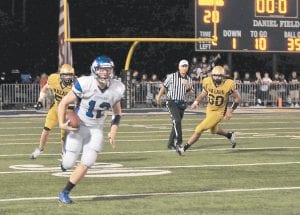 Brandon Jones rumbled 33 yards on the first play of the next Hazard possession. A tackle for loss on second down by LCC defender Chaz Bryant and pass deflection by Hunter Hall on the next play forced the first Bulldog punt of the game. An excellent 55-yard punt return by Hunter Hall was aided by incredible blocks by the Cougar return unit as Hall reversed direction and ran across the entire field to end first quarter action.

On 2nd and 8, Hunter Hall was tackled just short of the line for no gain. Hall gained two on 3rd and inches to give the Cougars first and goal from the three-yard line. After getting stuffed on a run up the middle, Holcomb called a great play action pass play in which Blair found receiver Ryan Alzuraqi alone in the back of the end zone. The Cougars didn’t convert on the extra point but still had their first lead of the game, 13-7.

The Bulldogs returned the Holbrook kickoff to the 32, and facing third and short Roll ran a quarterback sneak to get the first down. A gain of 18 yards by Brandon Jones set up a 29-yard touchdown pass from Roll to Higgins. The extra point sailed through the uprights and Hazard retook the lead 14-13 with 6:10 to play in the first half.

The second LCC three and out of the game quickly gave the ball back to the Bulldogs, who wasted no time scoring another touchdown on a pass from Roll to KP Hastings. The extra point was no good and kept the score at 20-13 with only 1:31 left in the second quarter.

The Letcher Central offense looked very comfortable in a twominute hurry up attack. Houston Watts caught a pass on his fingertips from Blair on a corner route for a 28-yard gain. Hunter Hall grabbed a screen pass with one hand and took it for nine yards. Blair found Watts again for a 15- yard gain. LCC caught the Hazard defense by surprise by handing off to Jaylyn Williams, who scampered around the right side for a 22-yard gain. Blair then faked a handoff to Hall and kept it himself for a nineyard touchdown run. Hall scored on a two-point conversion to give the Cougars a 21-20 lead with 40 seconds to go in the half.

LCC senior Kyler Lucas intercepted a Hail Mary pass and returned it for a touchdown that was called back because of an illegal block in the back. Letcher Central went into halftime leading 21-20 with momentum on their side.

Zane Blair had an excellent first half completing nine of 13 passes for 106 yards and a touchdown. Blair also ran for 42 yards and a score. Hunter Hall and Chaz Bryant led the defense in the first half with four tackles apiece.

The third quarter proved to be the deciding factor in the game. Hazard received the kickoff and a 22-yard gain by Jones up the middle on their first play had them in business. A holding penalty made it 2nd and 20 from the LCC 40- yard line. A 14-yard screen pass to Kody Arnett made it 3rd and 6. LCC defender Josh Boggs made a great open field tackle on the ball carrier, but Jones made the first down by inches. Zane Blair sacked the quarterback to begin the next series of downs. Jones ran for nine yards and then Roll found Hoskins on a 10-yard curl route to make it first and goal. Two spectacular plays by Cougar defenders Jacob Kiser and Stephen Fox kept Hazard out of the end zone. Then on third down, Kiser timed the snap count perfectly and sacked Roll as he was dropping back to pass to force a field goal attempt. Aaron Thomas tackled the holder for a 15-yard loss after a bad snap to stop the scoring attempt and give the ball back to the LCC offense.

Letcher Central fumbled on a bad handoff exchange and Hazard recovered on the LCC 37 yard line. The referees then called a nonexistent late hit on a Cougar defender that led to a 12-yard touchdown run by Arnett on a fullback dive play. The two-point conversion was no good. Hazard retook the lead 26-21 with 3:22 left in the third quarter.

The LCC offense had another three and out. A tired Cougar defense returned to the field. A facemask penalty on LCC and a 22-yard run by Jones got the ball to the Cougar 14-yard line. After three runs netted seven yards, Hazard went for it on fourth down and LCC lineman Dalton Gibson stuffed the middle and stopped Jones short of the first down to end the quarter.

Hazard dominated the third quarter, gaining 124 yards on 22 plays and time of possession was 10:47. The LCC offense was nonexistent, gaining just nine yards on six plays. With the goal line stand, the Cougar defense kept LCC in the game going into the fourth quarter.

Letcher Central’s offense got the ball moving again in the fourth quarter. On 3rd and 6 Blair rolled right and found Kyler Lucas for an 11-yard gain. Then Blair spun out of a sack and scrambled for a 10-yard gain. Hall gained 13 yards on a sweep around the right side to get into Hazard territory. Jaylyn Williams had a nice gain called back by a holding penalty that derailed the momentum and LCC was forced to punt two plays later.

Stephen Fox blitzed from his linebacker position and sacked Roll on first down. On 3rd and long, Roll lofted an uncatchable ball out of bounds right before he got sacked. The line judge, who was 20 yards behind where the receiver was as the ball sailed over his head, called a phantom pass interference. The strong LCC contingent that traveled to watch the game ran the field down with boos. After two unsuccessful runs, Kiser sacked Roll again to force a punt. Williams returned the punt to the Hazard 47 yard line.

LCC had 2:29 to score a touchdown to retake the lead. The referees made sure that didn’t happen. On first down the referees called a holding penalty to make it 1st and 20. Blair then connected with Watts for 17 yards on a crossing route. On the next play Blair rolled out of the pocket and with a defender draped on him threw the ball away. The official called intentional grounding even though by rule once you break the pocket you can throw it away as long as it crosses the line of scrimmage, which the ball did. Faced with fourth down, Blair threw a deep ball to Watts who was about to make the catch and was literally tackled right before the ball got to him. The referee reached for his flag, but then decided not to throw it and that was the ball game.

Letcher Central lost the game 26-21, but anyone in attendance knows that LCC was the better team and that officiating had a lot to do with the outcome. The Cougar defense played great and limited a potent Hazard offense to just 287 yards and 26 points. Hunter Hall had 11 tackles and Jacob Kiser came up big down the stretch accounting for eight tackles, two sacks and two tackles for loss.

Zane Blair finished the game completing 14 of 22 passes for 181 yards, one touchdown and no interceptions. Blair also ran for 53 yards and a score. Houston Watts caught five passes for 83 yards.

The Class 3A Pike County Central Hawks come into Friday night’s game with a record of 0-2, having lost to Williamsburg, 48- 26, and Lexington Henry Clay, 52-14.