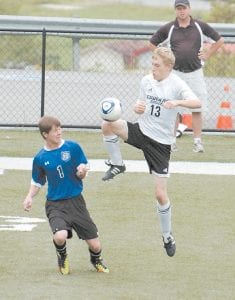 Letcher County Central High School’s Joel Murtaugh (13) battled for control of the ball during a match against 14th Region rival Estill County at Ermine on Saturday afternoon. The Cougars (8-5) lost 1-0 after Estill County (2-7) was able to convert a corner kick into a goal during the final seconds of the contest. Entering Tuesday’s match at home against Middlesboro, the Cougars were second in the regional standings, sandwiched between Jackson City and Perry County Central. Letcher Central will host Buckhorn on Thursday at 6 p.m. and Whitley County on Saturday at 11 a.m.