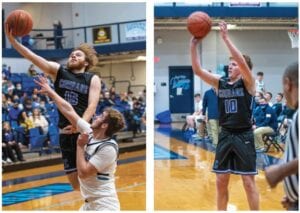 Letcher Central’s Isaiah Adams (above, left) drives to the basket to lay in a shot for two of his 16 points during the Cougars’ heartbreaking season-opening loss at East Ridge on Monday. Letcher Central led the host Warriors by 17 points at the end of the third quarter before East Ridge took control in the fourth quarter, outscoring the Cougars 28-11 and forcing the game into overtime on a last second three-point basket. East Ridge took the lead early in overtime and went on to win 79-76. Leading the Cougars in scoring was Nigel Nichols (above, right) with a 21. (Photos by Chris Anderson)