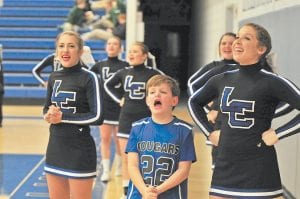 LENDING A VOICE — LCC cheerleaders Taylor Herron and Emily Johnson got a little help on the front line during Monday’s game from Peyton Hammonds, son of LCC boys’ coach Robert Hammonds. Peyton helped cheer the Cougars on to a 71-37 win over visiting Eastside, Va. (Photo by Chris Anderson)

LCC, which improved to 2-1 after Monday night’s contest, used a smothering three-quarter trapping zone defense in the third quarter to break the game open.

The Cougars’ third quarter defensive pressure, which forced 11 turnovers that LCC turned into 16 points, keyed a 19-0 run that pushed the Cougars’ lead out to 52-22 before Eastside’s Adam Ketron made a lay-up with three minutes left in the third.

In all, the Cougars forced Eastside into 23 turnovers and limited them to 32 percent shooting on 15/47 field goal attempts.

Derrick Cusano and Tim Counts led the 1-1 Spartans with 11 points each.

Junior Torell Carter, who left the game with 6:05 remaining and LCC leading 67-30, led the Cougars with a game-high 23 points and seven rebounds. Carter, who is averaging 33 points per game, dished out three assists.

LCC opened its season last week with a 66-63 last-second loss at home to highly regarded Harlan County before going on the road to light up Jackson City 108-86.

The Cougars are home for back-to-back games beginning tonight (Wednesday) with Phelps, followed by a visit from Prestonsburg Thursday. The Cougars travel to Jenkins Friday night and then visit Belfry next Tuesday (December 15).

Visiting Harlan County took advantage of three Letcher Central mistakes in the final 90 seconds to rally for a 66-63 victory.

LCC trailed 19-15 at the end of the first quarter and 24-15 early in the second quarter before rallying behind juniors Austin Caudill and Torell Carter to take a 34-32 lead at the break.

Torell Carter, who finished with a game-high 25 points, and Austin Caudill, who wound up with 12 points, were also effective on the defensive end in the first half in pulling down five rebounds each.

Junior Elijah Raglin’s lay-up with 3:17 left in the third quarter pushed the Cougars’ lead to 45-40. Raglin finished with seven points.

Harlan County took advantage of a pair of turnovers in the final minute of the third quarter to reclaim a 46-45 lead.

Harlan County refused to quit and battled back behind junior guard Cameron Carmical’s outside shooting and reclaimed the lead at 60-59 with 2:53 left to play. Carmical led the 1-0 Black Bears with 23 points.

Tyler Collins’s pair of free throws gave the Cougars their final lead at 63-62 with 2:06 left to play.

Down the stretch, Harlan County took advantage of three Cougars turnovers and reclaimed the lead at 64-63 on 6-2 junior forward David Turner’s garbage basket with 1:31 left to play.

The Cougars had chances to win, but back-to-back-to-back turnovers were hard to overcome. Carmical’s pair of free throws pushed the Black Bears’ lead to 66-63 with six seconds left.

Austin Caudill’s last second trey was close, but the Cougars came up empty.

Harlan County, which outrebounded the Cougars 38-27, made 24/59 field goal attempts — including 5/11 from three-point range.

After a tough loss three nights earlier at home in their seasonopener, the Letcher Central Cougars rode a school scoring record to their first win of the season at Jackson City December 4.

Led by Carter’s 14 third quarter points, LCC began to put some distance between themselves and the Tigers by the midway point of the third quarter. The Cougars’ lead grew to a comfortable 86-65 heading into the final quarter.

For the second straight game, junior guard Austin Caudill came off the bench to fill in at the point for the injured Jordan Gregory. Gregory, a three-year senior starter, injured an ankle the weekend before the Cougars’ season-opener. Gregory is expected to return to action this week.

Austin Caudill followed up his 12 points again Harlan County with 15 against the Tigers. Junior Austin Banks finished with 15 points by making five treys.

The two teams lit it up the scoreboard from all over the floor with some outstanding shooting. Each team made 11 treys and both were very efficient at the charity line with LCC converting 21 of 24 free throws.