The Letcher Central Cougars football team, surrounded by marching band members and cheerleaders, ran out of the smoke and onto the field before last Friday’s come from behind win at home. The Cougars clawed back from a 21-1 second half deficit to seal a thrilling 26-24 victory. (Photo by Chris Anderson)

Letcher County Central High School improved to 2-0 on the season with a 26-24 come-from-behind victory over visiting David Crockett High School of Jonesborough, Tenn. The Cougars’ won-loss record is now at 3-0 in the wake of Pike County Central’s forfeiture under the KHSAA’s COVID-19 policy. However, LCC picked up a game this Friday night at Ermine against perennial power Pikeville High School. Kickoff is set for 7:30 p.m.

In last Friday’s game against the Pioneers, LCC overcame a 21-0 halftime deficit to register a momentum-building victory early in the 2021 season. Carson Adams ran for 153 yards and threw for another 109 yards to lead the comeback.

Letcher Central returned the opening kickoff to its own 25-yard line. On third down and two yards to go for a first down, Adams gained three yards on a quarterback keeper. However, the drive stalled there and LCC was forced to punt.

On David Crockett’s first possession, Pioneers quarterback Brendan Reid connected with receiver Isaiah Lang for a 53-yard touchdown to take a 7-0 lead after the extra point sailed through the uprights.

Members of the Letcher County Central High School Cougars were jubilant after their come-from-behind win. (Photos by Chris Anderson)

With LCC now in possession, Adams found receiver Alex Blair on third and three for a 26-yard gain to take the ball into Pioneer territory. Two plays later David Crockett intercepted a swing pass to stop the scoring threat.

After the Cougar defense forced a three and out, the Pioneers’ punt was downed at the LCC 42-yard line to give the LCC offense great field position. Adams found Blair on a slant pattern for a first down, but a penalty on the Cougars stalled the drive, and LCC was forced to punt.

On their next possession, Pioneers receiver John Rucker caught a pass from Reid and juked a defender on the sideline, and outran LCC’s defense for an 85-yard touchdown to increase the lead to 14-0 early in the second quarter.

Letcher Central turned the ball over on downs and the Pioneers capitalized with a 55-yard pass from Reid to his brother Brayden Reid to make the score 21-0. 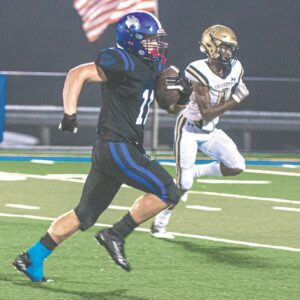 Letcher Central’s Isaac Matthews breaks free for a long rushing effort in last Friday’s thrilling come-from-behind win over David Crockett High School from Jonesboro, Tennessee. Matthews rushed for 56 yards in the game and scored a touchdown in the 26-24 win.

Now trailing by three touchdowns, LCC’s Blair caught an eight-yard pass to get the LCC drive started. On the next play, Adams found Blair again on an out-route for a 12-yard gain to take the ball into David Crockett territory. Two plays later, on third and two, Adams kept the ball on a sweep play for a 12-yard gain. Hayden Brashear then caught a swing pass for a 10-yard gain down to the Pioneer 10-yard line. The Cougars couldn’t punch it in, however, and the score remained 21-0 at halftime.

David Crockett began the second half with a 13-play seven-minute drive, but the Cougars defense stiffened up to force a turnover on downs.

After consecutive three-and-out possessions by both teams, Adams found Brashear on a swing pass on third down and six for an 11-yard gain. Then sophomore running back Isaac Matthews took a handoff up the middle for a 46-yard gain. On the next play Matthews scored on a 12-yard run and Adams ran in a two-point conversion to cut the Pioneers’ lead to 21-8.

After a perfect kickoff by Jonah Little that backed the Pioneers up to their own 11-yard line, the LCC defense forced a punt three plays later.

With LCC now back in possession of the football, Adams began the drive by gaining 13 yards on a quarterback keeper. Wyatt Ison then came in motion and took a handoff for a 25-yard gain around the right side of the line. Two plays later, Adams scored a touchdown on a quarterback sneak. Little took a handoff around the right side for a two-point conversion to cut the deficit to 21-16.

Facing fourth down and five yards to go for a first down, David Crockett faked a punt for 11 yards to regain some momentum. That play led to a 44-yard field goal that increased the Pioneers’ lead to 24-16.

After the ensuing kickoff, Adams faked a handoff and ran down the left sideline for a 60-yard gain to the Pioneer two-yard line. On the next play, Brashear dove across the goal line and a two-point conversion by Adams, who ran over a defender in the process, tied the game at 24 with just under five minutes left in the contest.

With David Crockett High now in possession, LCC linebacker Keaton Day blitzed up the middle to tackle Reid for a three-yard loss to start the series of downs. After consecutive incomplete passes, the snap sailed over the head of the Pioneers’ punter for a safety to give LCC its first lead of the game at 26-24.

With a miraculous comeback victory in sight and facing third down and 12 yards to go for a game-clinching first down, Adams dropped back to pass, then stutter-stepped a defender on his way to a 15-yard gain that sealed the deal with LCC now able to run out the clock.

“We put ourselves in a big hole in first half by giving up big plays and then not finishing drives on offense,” LCC Coach Junior Matthews said. “We left too many points on the field. It’s usually hard to come back from that kind of half against a good team, but once we got the momentum in the second half we got on a roll.”

LCC made great adjustments on both sides of the ball at halftime to completely change the narrative of the game. The Cougar defense gave up only three points the entire second half and those came off a fake punt.

The offense made timely big plays and were led by Carson Adams who gained 153 yards rushing on 18 attempts. Adams also completed 12 passes on 19 attempts for 109 yards. Adams had a rushing touchdown and scored on two two-point conversions.

Isaac Matthews gained 56 yards on three carries including a touchdown. Jonah Little had 32 yards on eight carries. Hayden Brashear had a rushing touchdown and caught three passes for 24 yards. Alex Blair led the receiving corps with six receptions for 62 yards.

The defense was led by Keaton Day and Jackson Meade, both with seven tackles. Dale Webb and Wyatt Ison had four tackles apiece for the swarming Cougar defense.