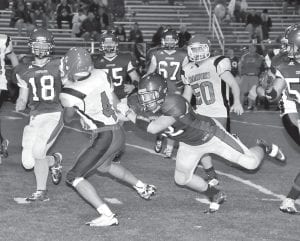 Letcher County Central’s Chris Tyree extended to take down a Perry County Central rushing attempt during the Cougars’ loss to the visiting Commodores, 13-7. The Cougars dropped to 2-6 on the season with the loss and will face Whitley County on the road this week before finishing up at home Oct. 29 against Greenup County. Letcher Central travels to Whitley County Friday. (Photo by Chris Anderson)

The Letcher County Central Cougars lost a hard fought contest to rival Perry County Central by a score of 13-7. LCC looked nothing like the team that got blown out last week and solid play on both sides of the ball kept the Cougars in the game all night.

The Cougar coaching staff decided to shake things up by starting senior Drew Bentley at quarterback in a formation similar to the wildcat formation the University of Kentucky used last year with Randall Cobb. The first possession was a three and out and when Perry Central got the ball they came out in an odd spread set that left the Cougar defense confused. Commodore quarterback Al Huff found receiver Austin Bray wide open down the left sideline and luckily for the Cougars Bray dropped the ball. Tony Cantu had a tackle for loss on third down and LCC returned the punt to their own 38-yard line.

Bentley and the Cougar ground game found running room on the next possession and made three first downs before being forced to punt. The Commodores started from their 14 yard line and wasted no time putting the first points of the game on the board. Running back Matt Robinson busted a run right up the middle for 49 yards on the first play. Then Huff lofted a pass into double coverage that receiver Darrell Beatty came down with for a gain of 32 yards. It led to a one-yard touchdown plunge by Robinson. The extra point was good and Perry Central took a 7-0 lead with just under five minutes left in the first quarter.

The Cougar offense was forced to punt again and the Commodores used a trick play to set up their next score. Once into Cougar territory Perry Central ran a double reverse pass that quarterback Al Huff caught and went 28 yards. Two plays later receiver Austin Bray made amends for his earlier drop when he caught a touchdown pass from Huff. The extra point was wide right and Cougar deficit was 13-0 early in the second quarter.

Hunter Hall returned the kickoff to the Cougar 45 yard line and Coach Whitaker turned the offense back over to sophomore Houston Watts. Running back Dalton Taylor started running over Commodore defenders and quickly amassed 24 yards on three rushes. Then Watts used a play action pass to find Chris Tyree for a 15-yard gain on the Cougars first pass attempt of the game. The Cougars went for it on fourth and three at the Perry Central 10 yard line and Bentley was stopped just short of the first down.

Chris Tyree and the Cougar defense stepped up and forced a Perry Central punt deep in their own territory. On fourth and four from the PCC 40 yard line Watts showed composure and scrambled six yards for the first down with less than two minutes left in the half. On the next play Watts found a wide-open Keaston Hall for 26 yards on a beautiful play action fake. After two negative runs and a sack the Cougars faced a fourth and goal from the 12 yard line with less than 30 seconds left in the half. Watts scrambled around in the backfield and bought just enough time to find Matt Boggs alone in the end zone for the score. Sidney Fields made the extra point and the Cougars had cut the lead to 13-7 at halftime.

Houston Watts was perfect in the first half completing all four of his attempts for 63 yards and a touchdown. Drew Bentley had 37 tough yards on 12 carries and Dalton Taylor added 29 yards on five carries. The defense played inspired football led by Sidney Fields who had five tackles and the most important stat for the Cougars, they committed no turnovers.

The Letcher County Central defense showed the same ferocity to begin the second half. Koree Stewart and Chris Tyree had consecutive tackles for loss and Drew Bentley returned the punt to the Commodore 35 yard line. The Cougar offense didn’t capitalize on the great field position and Perry Central started their next possession deep in their own territory.

On the first play Perry Central ran a wide receiver screen that Beatty caught and took 76 yards for the score. A holding penalty negated the touchdown and after getting two first downs the Commodore drive was stopped after Stewart sacked Huff for a 10 yard loss.

On third and 10 Houston Watts hung in the pocket and while taking a big hit found Matt Boggs for 18 yards. The first down conversion took the ball to midfield and the Cougars were down only six points to the heavily favored Commodores at the end of three quarters.

Facing a fourth down early in the last quarter Sidney Fields lined up to punt. The Cougar coaching staff called a fake and Fields took it around the left side of the line and dove for the marker. A crucial measurement ensued and LCC made the first down by inches. On third and nine the Cougars ran a trap play out of a shotgun formation and two nice blocks opened a hole for Chris Tyree who ran 12 yards for a first down. Bentley then ran over a defender on his way to a 13-yard run that put the Cougars into the Perry Central red zone. On the next play Watts was intercepted trying to throw a slant route by safety Austin Bray with just under seven minutes left in the contest.

The Commodores started on their own 31-yard line and on third down quarterback Al Huff came up just short of a first down on a run up the middle. Perry Central lined up to go for it on fourth and inches and Huff used a hard count to get the Cougars to jump offside. The penalty gave Perry Central an automatic first down and allowed them to chew up more clock. The Cougars defense had one more chance to get the ball back for the offense but on fourth and two from the LCC 36 yard line, Huff ran around the left side for a five-yard gain. The Commodores ran out the rest of the time and Letcher Central fell just short by final count of 13-7.

The Cougars played hard all night. Drew Bentley finished with 55 yards on 18 carries. Dalton Taylor had 34 yards on six attempts. Houston Watts had a very solid performance completing eight passes on 11 attempts for 90 yards and a touchdown. Matt Boggs led the receiving corps with 30 yards on two catches and a score. The defense swarmed around the ball all night. Caleb Baker and Sidney Fields had eight tackles apiece. Tony Cantu had two tackles for loss and Koree Stewart was in the backfield all night and recorded a sack. The Cougars travel to Whitley County Friday in their final district contest of the season.