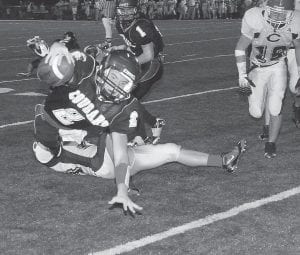 Letcher County Central quarterback Logan Johnson broke a tackle and was able to dive into the endzone for a touchdown in the Cougars’ big win over Perry Central Friday night. (Photo by Chris Anderson)

Coming off a heartbreaking loss in the last minute of the game at Belfry, the Letcher Central Cougars got a week off before opening district play this past Friday night at home against the Commodores of Perry Central.

You knew it would be a battle. Letcher Central went to Hazard last year and left with a 33-32 loss as the Commodores came away with a controversial victory, and an unhappy bunch of Cougars and Cougar fans made the long trip home.

But that was then and this is now, and the stands were packed on a muggy and wet night.

The Commodores average more than 50 points a game and the Cougar defense had its work cut out for it. The one sore spot for the Cougars has been handling the ball on special teams, and it struck early in this game. 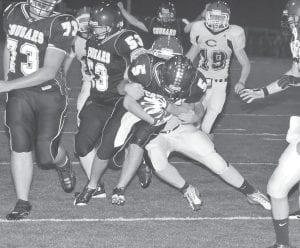 Letcher County Central runner Dustin Brown found himself wrapped up by the Perry County Central defense but was still able to break the plain of the goal line with the ball and score in his team’s win over Perry Central. (Photo by Chris Anderson)

On the opening kick the ball was fumbled at the Cougar 30- yard line and the Commodores pounced on it. It took one play, as Amos connected with Jay White for a 30-yard touchdown strike and the battle was on. The extra point was blocked by the Cougars and the score stood at 6-0 Commodores.

The Cougars came right back and marched to the Commodore 18-yard line. Greg Collins got the call and answered with an 18-yard touchdown around the right side.

The Cougar extra point was also blocked, and with less than three minutes gone it was 6-6.

The Commodores were not intimidated, and after a big return aided by a penalty, they started at their own 44-yard line.

Amos hit on two long passes, and then Runyon picked up another first down on the ground with 7:00 remaining in the first quarter.

With the ball on the Cougar 22, Amos found his favorite target (Beatty) alone in the end zone for another Commodore touchdown. It was 12-6 after the conversion failed.

The Cougars did not answer on their next series, although they did get to the Commodore 7-yard line, but the Commodore defense stepped up big on a fourth-down play, and forced the Cougars to turn the ball over on downs.

The Cougar defense kept the Commodores bottled up deep in their own territory, and forced a Commodore punt. The ball was taken at the Commodore 37, after a big run by Chase Adams. Quarterback Logan Johnson opened the series with a big run up the middle to the Commodore 25.

The first quarter ended, and on the second play of the second quarter, Johnson took off and sailed to the end zone to give the Cougars their second score. He tacked on the conversion and the Cougars led 14-12.

The Cougars seemed to gain momentum as the defense hit the Commodores twice behind the line of scrimmage, highlighted by freshman Chris Tyree hitting a Commodore running back in the backfield like a runaway train.

The Commodores were forced to punt as Tyree forced Amos out of the pocket and he couldn’t connect with his receiver. The Cougars quickly took advantage as Johnson connected with Robbie Huff on a play action pass down on the Commodores 6-yard line.

Dustin Brown got the call as he bulled his way to the goal line. The score increased to 20-12 Cougars.

Amos did not lose his composure, and he quickly moved his team to the Cougar 17-yard line. On the next play the Cougars forced Amos to scramble before he finally threw the ball and the Cougars came up with an interception.

The game got out of hand after the Cougars took over. A pass to Chase Adams was incomplete as Commodores were hanging on him, but there was no flag. A penalty was called on the Cougar bench as Coach Howard was furious over the no-call.

The first half came to a close with the score staying at 20-12. The Cougars had nine penalties at the half, but they maintained the lead. The Commodores opened the third quarter on offense, and Amos quickly moved the Commodores to mid-field.

The rain really started up, and on a fourth-and-one play Amos handed to Rankin, and after it looked liked he was stopped, he bounced outside to the left and was gone.

Amos took over, and in one play he faked everyone out and kept the ball and scored himself on a 30-yard run to give the lead back to the Commodores at 24-20.

It wouldn’t last,. The Cougars started inside the Commodore 40- yard line after a big return by sophomore Conrad. It took Dustin Brown one play, as Johnson found him in the left flat and he ran over and through people all the way to the 5-yard line, then hurdled the last Commodore at the 5 for the Cougar score.

The conversion by Drew Bentley would make it 28-24 Cougars. The Commodores moved quickly to the Cougar 38 but on a fourth-and-short play, big Ryan Hall stopped Amos in his tracks and the Cougars took over.

They moved down deep inside Commodore territory, highlighted by a Johnson run to the 2-yard line. Johnson got hurt on the play and had to leave the game.

Nathan Maggard took over at quarterback. Brown got the call again and he answered again from 2 yards out, and the score increased to 35-24 after McKenzie Smith nailed the extra point.

The score would stand after three quarters. The Commodores showed no quit in them, and they quickly answered with a score of their own on another pass from Amos to Beatty. The conversion by Rankin made it 35-32 in the middle of the fourth quarter.

The Cougars would not be able to pick up a first down on their next series, and they were forced to punt. The defense had to make one more huge stop to secure the victory.

The Commodores had other ideas. Behind Rankin and Amos, they moved inside Cougar territory. The Commodores got to the Cougar 27-yard line, and shades of the Belfry game were starting to emerge.

But not this time. Ryan Hall came up with a huge hit behind the line of scrimmage, and a pass to the end zone by Amos was knocked down by the Cougars’ McKenzie Smith.

The Cougars could not move the ball after taking over on downs, and the Commodores got one more shot. They started in good field position at the Commodore 48 with 2:52 left in the game.

The defense answered the final call. Hall hit Rankin in the backfield for a loss of 4, then Amos was smothered back on the 47, on the next play Amos was stopped for no gain, and the defense had done it.

The Cougar offense ran out the clock, and that gave the Cougars a big district win over a very good team.

This one will feel good for a while, but now the Cougars must prepare to go on the road and face Harlan County, and then travel to Whitley County the following week.