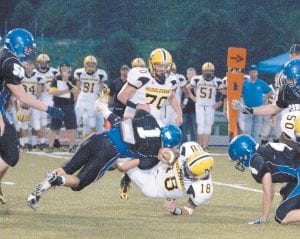 BIG HIT — Letcher County Central’s Jessie Rose put a stop to a Middlesboro rushing attempt by taking down the ballcarrier with authority. (Photo by Chris Anderson)

The Letcher County Central Cougars are ranked No. 5 in Kentucky in the latest Associated Press high school football poll.

After finishing 2008 with a record of 10-3 and making it to the regional championship for the second straight year, the Cougars and coach Hillard Howard have hit the ground running.

With several new coaches and some new faces at key positions, the Cougars are ready to make another run at the regional title. Gone are offensive coordinator Ben Howard and line coach Larry Maggard. Howard took over the reins at his father’s old stomping ground, Pikeville. Maggard is leading the Jenkins Cavaliers for his second stint as head coach. He coached Morgan County earlier in his career.

Also gone from this year’s team is quarterback Charlie Banks, who has taken his talent to the next level at Eastern Kentucky University. 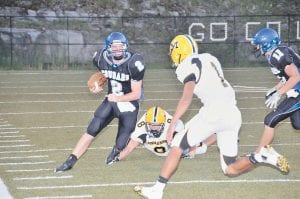 Sophomore quarterback Logan Johnson rushed for yardage against Middlesboro during Letcher Central’s win over the Yellowjackets at Ermine. The Cougars are ranked No. 5 in the Class 5A poll. (Photo by Chris Anderson)

It is a new season at Letcher Central, and Banks has been replaced by young gun Logan Johnson. Johnson, a sophomore, played regularly on defense as a freshman and saw limited action at quarterback, but he made the most of the time he saw.

Taking over the offense is Coach Mike Whitaker. Whitaker has 21 years of experience, including stints with Leslie County and Tim Couch and Corbin. Delano Thomas returns as defensive coordinator.

The Cougars have nine juniors led by Dakota Cornett and transfer Jesse Rose.

The Cougars are loaded with sophomores that are already starting led by Johnson, Koree Stewart, Sidney Fields, and Ryan Hall. They will also have a very good group of freshman.

This past Friday, Letcher Central hosted the Middlesboro Yellowjackets (0-1) in the Alumni Bowl. Middlesboro took the opening kick at the 25 and moved out to the 33 on a quarterback sneak by Roark.

A pass to big man Matt Powers on a trick play picked up big yardage for the Yellowjackets. Jesse Rose’s tackle saved a sure touchdown for the Cougars. The Cougars stopped three passes and McKenzie Smith knocked down the third one on a fourth-down play and the Cougars stopped the Middlesboro drive at their own 24.

The Cougars went to work quickly as Johnson found Dustin Brown at the Middlesboro 40 and then Travis Stephens at the 27 on two pretty pass plays. The drive stalled and the Yellowjackets took over on downs.

The Cougar defense smothered the ‘Jackets on this series as Sydney Fields and Koree Stewart both had tackles for losses and the ‘Jackets had to punt.

Johnson and Co. started another drive and moved out to the Cougar 41 on a keeper, but on the next play his pass was deflected and the Yellowjackets intercepted the pass on their own 29.

The ‘Jackets turned it right back over to the Cougars on an interception by Jesse Rose with his second big play of the quarter. The period ended with no score.

The Cougars opened the second quarter with another drive deep into ‘Jacket territory as they moved down to the 17-yard line, but a pass to the end zone resulted in Johnson’s second interception of the half.

This time Middlesboro, behind Roark, moved down to the Cougar 14 as he took off around left end and almost took it to the house. The Yellowjackets’ running backs could not get into the end zone after getting to the Cougar 5-yard line. so they settled for a field goal to go up 3-0. The Yellowjackets always have a field goal kicker (Knuckles) that could play pro ball somewhere and, yes, they are that good.

It was the Cougars’ turn but they were forced to punt and then the Jackets also would have to punt. This time the Cougars wasted no time. A razzle-dazzle play completely fooled Middlesboro as well as everyone else and the Cougars had it first down and goal at the ‘Jacket 10- yard line. It took one play as Johnson found Travis Stephens in the end zone and it was quickly 6- 3 Cougars. The score stood at the half and the Cougars led the defensive struggle at the break.

They opened the third quarter on offense. After moving out to midfield, Jesse Rose scored on a pass play but it was called back on a penalty. The Cougars were forced to punt and the third quarter was much like the first two. The score would stay at 6-3 Cougars.

The ‘Jacket players really started cramping up late in the game and they started horse collaring on several tackles as the Cougars seemed fresher. This is where you grab the top of the shoulder pads at the back of the player’s neck. The ‘Jackets had two of these to set up the Cougars inside the ‘Jacket 5-yard line. Dustin Brown took it home and the lead grew to 12-3.

The ‘Jackets answered with another Knuckles field goal to make the score 12-6. The game got scary later in the fourth as the Cougars had the ball on their own 29 and went for the first down on a fourthand inches play. Johnson bowled over the middle for a big Cougar first down.

Sensing the momentum going to the Cougars, the ‘Jackets gave up a couple of big runs to set up a pass from Johnson to Stephens, and he juked his way to end zone with 3:00 left in the game. Johnson scored the 2-point conversion up the middle and that was it, 20-6 Cougars.

The Cougars’ defense was outstanding on this night and the offense is starting to gel. Johnson is going to be something special. He has no fear and he will run over you if you don’t tackle him. If he stays healthy this could be a big year for the Cougars. On the night he was 11-16 for 204 yards and 2 touchdowns. Both of the touchdowns were to Travis Stephens.

The Cougars were led on the ground by Greg Collins with 65 yards, followed by Johnson with 59 yards. The Cougars had 337 yards of offense for the game against a good Middlesboro team. They were led on defense by big Koree Stewart with 6 tackles.

Now the Cougars will see how good they are as they will travel to Hazard to take on the Bulldogs. Hazard should be in the mix for another regional championship this year so the Cougars will have to bring their A game. The Cougars will also host Belfry in a couple of weeks, so things do not get any easier going into the district games.