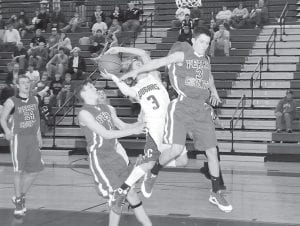 Josh Profitt’s drive to the basket ended with him drawing the foul on this play. Profitt sank his free throws on his way to scoring 10 points in Letcher County Central’s game against Perry County Central. (Photo by Chris Anderson)

The Cougar boys played twice last week, hosting the Commodores of Perry Central on January 20 and then traveling to Owsley County on Saturday to take on the Owls.

The Cougars started the week with a record of 13-3 and were ready to hook up with the Perry Central Commodores who were fresh off winning the WYMT Mountain Classic held at Perry Central. The Commodores have been led by the Amos brothers (Jordan and Deron) on the court much as they were on the football field. They are well coached and they run their offense to perfection. They are a team that gets the most out of their ability and they will hold the ball till a shot presents itself.

They opened the game against the Cougars and the Amos brothers took over. They combined for a trey and three lay-ups in the first quarter to lead after one, 13-6. The lead grew to 26-9 in the second as the Cougars could not buy a basket. They went to the power game inside with Charlie Banks and Cole Cornett to get the score to 28- 14 at the half.

In the third, the Cougars opened on a 4-0 run on buckets by Banks and Cornett. The game started to get physical as it usually does with these two teams, and the Cougars pulled within eight after three (37-29).

The Cougars opened the fourth with a 15-foot shot by Banks to make it 37-31, but that is as close as the Cougars would get as the Commodores nailed their free throws down the stretch and pulled out the 56-45 hard fought win.

The Cougars never seemed to get on track offensively as they fell to 13-4 on the season. After shooting 17 percent in the first half on 4-23 they shot 42 percent in the second half but it wasn’t enough. They hit only two treys on the night and those came from Josh Proffitt. He hit 2-7 on the night and had to fight to get an open shot on every possession.

The Cougars were led in scoring by Josh Proffitt and Charlie Banks with 10 each. Devon Blair and Jordan Reynolds had 7 each. Cole Cornett and Logan Johnson had 4 each, and Ryan Brock had 3.

Brock really hit the boards for the Cougars as he came up with 9 rebounds to tie Charlie Banks for team honors. Jordan Reynolds had a big game on the boards with 7 to match his point total. Banks led the team with 4 assists.

On Saturday night, the Cougars traveled to the land of the Owls in Owsley County for another big game. The Owls are struggling this year with a record of 3-12 and the Cougars took full advantage of that as they came out on fire and blasted the Owls 96-50.

The Cougars have a trio of games this week. They were to host the Blackcats of Prestonsburg on Tuesday night and then travel to Jenkins on Thursday night and finally they make the long trip to Powell County on Saturday night. They should handle these teams but you never know. I do know they travel to Knott County for a big rematch with the Patriots next week. Knott County is the only district team to beat the Cougars and they are a solid favorite to battle for the 14th Region title as well.