The Letcher Central Cougars boys’ team is on a roll. After losing to June Buchanan in a heartbreaker at Pippa Passes, they lost again to a good Cordia team, also on the road.

This must have been a wakeup call for the Cougars because they have put up some big numbers since those losses. The Cougars played three games last week and, not only did they win all three, they dominated all three. Now mind you it wasn’t against the likes of Cordia or June Buchanan, but they did play a pretty good Estill County team and they also played cross-town rival Jenkins and Powell County, Va., which came in with a 5-4 record.

In the first game, which was at Ermine, the Cougars (6-7) hosted Powell Valley (5-4). Charlie Banks got the Cougars on track by scoring 11 points in the first quarter to pace the Cougars and give them the lead at 19- 8 after one quarter. Powell Valley would make a small run to cut the lead to nine in the second quarter, but that is as close as it got as the Cougars doubled up the score at halftime and led 36- 17. 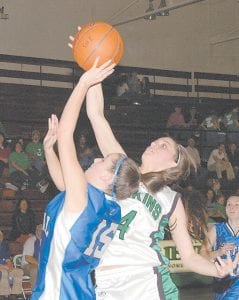 Letcher Central’s Myrica Begley was unable to get this shot off before Heather Bowling came up with the block for Jenkins in the Lady Cavaliers’ loss to the Lady Cougars. (Photo by Chris Anderson)

Devin Blair opened the second half with a trey and Josh Profitt went crazy from threepoint range as he nailed three in the quarter to push the Cougars out to a 50-22 lead and it was all over but the final score. The Cougar substitutes (who played most of the second half) would continue to add to the score as they went on to roll 67-29 and improve to 7-7 on the season and drop Powell Valley to 5-5.

The Cougars were led by Banks with 15 points followed by Profitt with 13 and 4 treys, Devin Blair with 12, six each to Jordon Reynolds, James Gose, and Malachi Smith, 4 to Cole Cornett, 2 each to Eric Ison and Chase Adams, and 1 to Ryan Brock.

Up next for the Cougars were the boys from Jenkins. These two teams have had some battles already the last two years and this game looked to be much of the same. Jenkins was without its star player, Chris Puckett, and without the services of Mr. Puckett the Cavaliers ran into a buzz saw with the Cougars. The Cougars led by 14 at the half and 19 after three quarters as they blasted the Cavaliers 60-28. 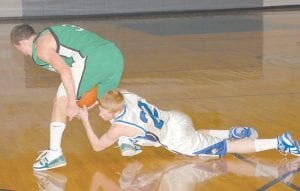 Eric Grimm of the Jenkins Cavaliers, left, and Devin Blair of Letcher County Central fought for control of a loose ball in a game played in Jenkins last week. (Photo by Chris Anderson)

The Cougars were led again by Charlie Banks with 20 points – the only Cougar in double figures. Malachi Longworth would finish with 9 points and Chase Adams had a big game with 8 points. Josh Profitt hit two treys and finished with 6 and Jordon Reynolds also had 6. Devin Blair and Eric Ison each had 4, Malachi Smith had 3 and Cole Cornett had 2.

This game was not your typical Cougar and Cavalier game. Chris Puckett is a tremendous athlete and without him the Cavaliers were without a go-to man. You can bet it will be a much closer game when the Cougars travel to Jenkins later in the season.

The Cougars also played Estill County on the road last Saturday night and what else can you say but Josh Profitt? The junior guard hit 7-7 from behind the arc and paced the Cougars to a big 79-50 victory. Profitt can hit from the bleachers and he just about did that at Estill County.

The Cougars improved to (9- 7) with the victory as they won their third game of the week.

The Crusaders of June Buchanan and the Lions of Cordia will make the trip to Ermine this week and maybe the Cougars can get two much-needed district wins. If they play like they have been, they will shock some teams.

June Buchanan is coming off winning the WYMT Classic over Hazard last week and they look like the team to beat in the region. They should be one of the favorites to win the All A Classic coming up in a few days also. The Cougars let one get away earlier against the Crusaders as June Buchanan remained calm and pulled it out. The Cougars will be itching to get the rematch.

The Lady Cougars played twice last week as they looked to improve on their 3-8 record. The girls are very young and are taking their lumps but they continue to improve and will only get better.

Led by Shannon Bays with 8 and Brittany Sexton, the Lady Cougars hung tough. They changed their defense in the third and forced Betsy Layne to shoot outside and pulled back ahead after three quarters 37-33.

This was a heartbreaker for

the girls, but they will learn from this. They had only four players to score in the game, led by Shannon Bays with a super effort and 18 points. Brittany Sexton finished with 16 and Sharaye Kincer tossed in 9. Wynn finished with 3 to round out the scoring.

The Lady Cougars fell to 3-9 and looked to get back on the winning side against the Lady Cavaliers of Jenkins in their next game on Friday night. The Lady Cougars were on a mission after losing to Betsy Layne, and there was no way that was going to happen again.

In much the same fashion as the boys’ game, the girls took control early and led 21-2 after one and 35-12 at the half. Paced by 28 points from Brittany Sexton, the Lady Cougars rolled to the big victory 60-27.

Shannon Bays and Sharaye Kincer each had 10 points, Campbell had 6, and Boggs, Collins, and Begley each had 2 for the Lady Cougars. They improved to 4-9 while the Lady Cavaliers fell to 2-15.

Things will get tough again for the Lady Cougars as they will now travel to Breathitt, Perry Central, and Knott County for their next three games.