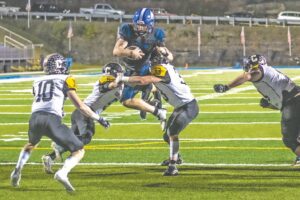 The Letcher County Central Cougars hope to gain momentum for the KHSAA football playoffs when they travel to Bourbon County this Friday for their final game of the regular season. Kickoff is set for 7:30 p.m.

The Cougars (7-2) lost to perennial powerhouse Johnson Central by a score of 48-18 at Ermine last Friday in a game that saw them trailing only 14-12 early in the second quarter but then were outscored by 34 straight points to secure the victory for the Golden Eagles.

“We started good offensively,” said LCC Coach Junior Matthews, but “we didn’t defend the run at all and had too many missed assignment and tackles. I didn’t do a good job preparing our defense.”

The Cougars took the early lead after returning the opening kickoff to their own 31-yard line. Two plays later, facing third down and seven yards to go for a first down, quarterback Carson Adams found Nicholas Haning on a wide receiver screen for a 30-yard gain. A personal foul penalty on Johnson Central led to a 16-yard touchdown pass from Adams to Haning, who used a nice juke move to evade a defender and get into the endzone. The extra point was wide left to keep the score at 6-0 in favor of LCC.

Johnson Central wasted no time in taking the lead back. On third-and-two, fullback Chase Price took a handoff and cut through the Cougars defense for a 62-yard touchdown run. The extra point gave the Golden Eagles a 7-6 lead.

With LCC again in possession of the football, Adams found Jonah Little on a swing pass out of the backfield for a 25-yard gain. A few plays later, on third-and-11, Adams scrambled for an 18-yard gain deep into Johnson Central territory. Facing fourth down and three yards to go from the Golden Eagles 13-yard line, LCC went for the first down but the pass fell incomplete for a turnover on downs.

After Johnson Central in- creased the lead to 14-6 after Price, the fullback, scored from 26-yards out and the extra point kick was good, LCC’s Adams, on the first play of the second quarter, completed a pass to Little on a tunnel screen for a 53- yard gain. Two-plays later, Adams scored from 10 yards out on a quarterback keeper. The two-point conversion was no good, keeping the score at 14-12 in favor of Johnson Central.

The Golden Eagles were then able to regain their momentum with a six-play 60- yard scoring drive capped off by a 19-yard touchdown run by Price. The extra point made the score 21-12.

LCC’s offense then stalled, going three-andout to give the ball right back to Johnson Central. The Golden Eagles methodically moved the ball down the field before Grant Rice scored on a quarterback keeper from 24-yards out to make to make the score 28-12.

Things got even worse for LCC from there, as the Cougars fumbled the kickoff, and the ball was scooped up and returned for a 27-yard score by Johnson Central for a 35-12 lead. Then, after another LCC turnover on downs, Rice scored from three yards out to give Johnson Central a 41-12 halftime lead after the extra point failed.

Johnson Central received the second-half kickoff and proceeded on a 10-play drive that led to a three-yard touchdown run by Matt Crum. The score made left the score at 48-12 and a running clock was instituted for the remainder of the game.

After the LCC offense drove the ball just past midfield before turning the ball over on downs, Cougars linebacker Mercer Quillen intercepted a pass and returned it down the left sideline to the Johnson Central 31-yard line. On third-down and six yards to go for the first down, Adams bought enough time to complete a pass to running back Hayden Brashear, who dove into the end zone to score from 27-yards out. The conversion failed but LCC had cut the lead to 48-18.

Carson Adams again led the LCC offense, completing 10 passes on 18 attempts for 170 yards and two touchdowns. He also gained 79 yards rushing on 16 attempts and a touchdown. Jonah Little had three receptions for 84 yards including a 53-yard reception. Nicolas Haning had four catches for 55 yards and a score. Hayden Brashear caught the 27-yard touchdown pass from Adams for his lone reception of the contest.

Keaton Day was the leading tackler for LCC defenders with 12 total tackles. Dale Webb had 10 tackles. Quinton Williams had nine tackles. Kaden Barnette and Dakota Hall had seven tackles each for the Cougars.

Mercer Quillen had an interception for the only takeaway for the Cougars defense.