Cougars should rebound from loss 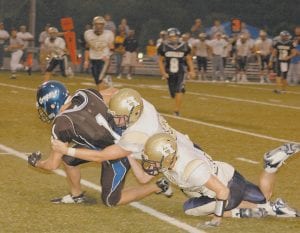 
Well, it’s finally here. It’s football time in the mountains and the Letcher
County Central Cougars began their season this past weekend with a loss to the
boys from Hazard.

The Cougars have moved from Class 3A to Class 5A after the realignment, and instead of there being four classes there are now six. The Cougars will no longer play Rockcastle and Bell County in the district, but will pick up North Laurel and Whitley County. Clay County and Perry Central will join the Cougars to make up the five-team district. The Cougars feel they can compete in this district and this could be the year the Cougars make the playoffs for the first time ever.

Some other new teams will be on the Cougar schedule this season as well. Following the Hazard game Letcher Central will travel to newcomer Greenup County on August 31 and then host Perry Central on Sept. 7 before hitting the road again to take on a powerful Clay County team Sept. 14. It’s back home to face another newcomer in North Laurel on Sept. 21.

The Cougars will take on the Eagles from Leslie County at home Sept. 28 and head back on the road to take on the other district newcomer, Whitley County, on October 5. East Ridge will come to Ermine the following week (Oct. 12) before the Cougars have an open date on October 19.

Letcher Central closes out the season with two more newcomers: The Cougars will travel to Bourbon County Oct. 26 and then close out the season at home against Lawrence County on November 2.

The Cougars have six home games this year and with the new teams on the schedule they have every reason to be excited.

Coach Hillard Howard is in his third season at the helm, and with son Ben as offensive coordinator, and with longtime friend Delano Thomas taking over the defense, he has every reason to be excited. Coach Howard is trying to build what he built at Pikeville High School, where he led the Panthers to three consecutive state titles in the late ’80s and averaged 10 wins in each of his 22 seasons as coach. You don’t build a powerhouse in three years. You build step by step, and that’s what Coach Howard and his staff are trying to do.

The Cougars lost a huge chunk of their offense from last season because of graduation. Gone are receivers Jonathan Adams and Jonathan Tucker, both of whom are taking their skills to the next level in various sports. Also gone are Hank Simpson and Eugene Collier. Simpson will be sorely missed on defense. Gone are lineman Chuck McBee and several other linemen the Cougars will have to replace.

This edition of the Cougars is a young group and they will use a lot of sophomores to fill some holes. Junior Charlie Banks is calling the signals at quarterback and former quarterback Dakota Brock (senior) along with Ben Fisher (senior ), Terry Tolson (senior) and Joe Gillespie (senior) will take care of the ground game. On defense the Cougars will be young but exciting.

The Cougars looked good at times in their scrimmages against Middlesboro, Breathitt County and Boyd County, but on Friday it was time to strap on the pads for real. It was blistering hot and the game with Hazard was delayed 30 minutes and kicked off at 8 p.m. The stands were full as the Cougars won the toss and elected to receive.

On the opening kick the ball was fumbled by the Cougars and Hazard was all over it at the Cougar 16-yard line. Hazard has another Olinger as usual on its roster and as in years past he is a to watch out for. It took just four plays as Olinger scored from his quarterback position from 1 yard out and Hazard was up 7-0 before everyone was in their seats. This was not the way the Cougars hoped to start the season but it happened.

They received the ball again and started to drive from their own 23-yard line. Dakota Brock picked up 11 yards and a first down on the first play. On a third and four play, Ben Fisher picked up 6 yards for the Cougars’ second first down. He followed that up with 11 more to the Bulldog 42-yard line. Tolson moved down to the 36 on a great fake by Banks and then with 6:14 remaining in the first quarter Banks hit sophomore Chase Adams for 8 yards and another first down. On a third and 6, Banks connected with Kevin Wurschmidt (junior) for a big first down on the Hazard 8-yard line.

Everything was looking good for the Cougars and then on a pitchout the ball was fumbled and Hazard was there to pick it up and stop the Cougar drive. The quarter ended 7-0 Hazard.

The Cougars would get good field position on their next series after a personal foul was called on Hazard. They started at the Bulldog 46. Banks quickly found Chase Adams at the 26-yard line for 20 yards, but the drive stalled and the Cougars gave it up after a pass on fourth and 10 was incomplete.

Hazard took over with 5:44 left in the half. At the 4:11 mark, sophomore bulldozer Blanton exploded up the middle and was stopped at the 2-yard line of the Cougars by Chase Adams. Adams came out of nowhere and ran him down. Olinger walked in from there and, after a botched extra point, the holder picked it up and ran it in to give Hazard the 22-0 lead.

The Cougars moved the ball to midfield but an interception down on the Bulldog 20 turned the ball right back over. Hazard was not content with the score and quickly connected on a 51- yard pass play and with only seconds left in the half, Olinger just threw it to the end zone. As luck would have it, Eric Simms came down with his second touchdown reception of the night as the Dogs went up 28-0 at the break.

The fumble on the opening kickoff set the tone for the night for the Cougars and they could never seem to get over the hump.

At 4:54 of the third, Hazard tacked on another score as Campbell went in from 1 yard out to make it 35-0. A Cougar punt set up Hazard’s final score as it took over at the Cougars’ 30- yard line and Olinger threw it to the end zone on a third and five play and a 43-0 lead after the 2- point conversion with 2:50 left in the third quarter.

The Cougars could have laid down but they fought back and made it interesting. Charlie Banks scored for the Cougars with 49 seconds left in the third quarter after putting together a quick drive to make it 43-6.

Hazard fumbled and the Cougars drove again. This time Banks connected for 59 yards to Terry Tolson and Banks scored the conversion and it was 43-14. The Bulldogs were forced to punt, but the Cougars gave up their fifth turnover of the night on an interception.

Late in the fourth quarter Hazard punted from its own goal line and the Cougars got good field position and scored again as Banks found Dakota Brock in the end zone from 10 yards out. Ben Fisher tacked on the conversion with 1:19 left in the contest to make the score 43-22.

The score would stand and the Cougars were shell-shocked as the Bulldogs went home with the victory. Hazard is probably not a three-touchdown better team than the Cougars, but it was on this night. The Cougars’ turnovers set the tone and Hazard converted the turnovers into points. You can’t turn the ball over five times against a good team. The Cougars will be fine, I think, but they will have to cut down on turnovers if they hope to make some noise in their district.

Charlie Banks connected on 13 of 30 passes for 194 yards with two touchdowns and two interceptions. Ben Fisher picked up 58 yards on the ground with only eight carries. Overall, the Cougars picked up 115 yards rushing. The defense was lead by Caleb Frazier with 13 tackles and four assists, Richard Shepherd had seven tackles and two assists.

I think this will be an exciting year for the Cougars
and I think Hazard is probably one of the best teams they will face. They now
will prepare to take on Greenup County and hope to rebound with a big victory
before district action gets underway. Go Cougars!