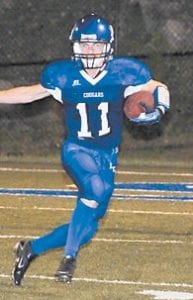 Letcher Central fell to 0-4 on the year after a 25-6 defeat at the hands of undefeated Montgomery County. The Cougar defense looked much improved from last week, but the offense was its own worst enemy. Numerous possessions were derailed by untimely turnovers and penalties.

Montgomery County kicked off first and used a squib kick to pin the Cougars deep in their own territory. The Indians forced a three and out and Chas Newkirk returned the punt to the LCC 24 yard line. Montgomery County quarterback Matt Tuttle gained 12 yards on a run. Then the Cougars dialed up consecutive wellexecuted blitzes to lead to a 4th and 8 from the LCC 10-yard line. Letcher Central forced Tuttle out of the pocket on the play and he tucked the ball in like he was going to run for the first down, sucked the defense up and right before he was going to cross the line of scrimmage found receiver Chase Hall alone in the back of the end zone for the touchdown. The extra point was good and the Indians led 7-0 with 8:15 remaining in the first quarter.

LCC used a beautiful mix of run and pass on the next drive to get deep into Montgomery County territory. The Cougars started at their own 20 and Hunter Hall gained 12 yards on two dive runs to get a first down. Then quarterback Zane Blair faked it to Hunter Hall and kept it for a gain of seven yards. On the next play the Cougars ran a screen pass in which Blair found Hunter Hall for an 18-yard gain to get across midfi eld. On 3rd and 6 Blair connected with Keaston Hall on a comeback route for a gain of 8 yards. Josh Boggs ran a great route and created pass interference on the Indians to move the ball into the red zone. On 3rd and 10 Blair was intercepted by Newkirk and appeared to be heading for a pick six, but a hustling Hunter Hall caught him from behind and stripped the ball. Unfortunately, Montgomery County recovered the fumble on the LCC 20 yard line. Facing a 1st and 25 after two Indians penalties, Tuttle completed a 35-yard touchdown pass to Newkirk. After the extra point was no good, the score was 13-0 in favor of Montgomery County.

Josh Boggs had a nifty kick return to give the Cougars their best field position of the game at their own 40-yard line. Chris Tyree had gains of nine and eight yards on consecutive runs to get into Indians territory. Penalties stymied the drive and the Cougars eventually gave the ball up on downs right before the first quarter ended.

Cougar linebacker Keith Boggs put a vicious hit on Tuttle to force a 3rd and 8. Then Stephen Fox came on a corner blitz and sacked Tuttle for an 18-yard loss to give the LCC offense the ball on the Indians 43-yard line. Blair threw a perfect over the should pass that Keaston Hall brought in for a 37 yard gain. On the next play Blair called his own number and scored on a quarterback keeper from two yards out. The extra point was no good and with 9:07 remaining in the first half LCC had cut the lead to 13-6.

The Indians used a fake punt on the next drive. Facing 4th and 4 at midfield, Tuttle from punt formation completed a pass to Newkirk for a gain of six yards. Then Hunter Hall got a sack, but a questionable personal foul call on another LCC defender gave the Indians an automatic first down.

Two plays later on 1st and goal, Montgomery County running back Blake Preston was about to cross the end zone and was stripped of the ball. The ball bounced through the back of the end zone and by rule the Cougars got the ball at their own 20-yard line.

The LCC offense couldn’t capitalize and facing 4th and long a bad snap went by punter Zane Blair and ended up giving the Indians the ball at the LCC eight yard line. Tuttle quickly connected with receiver Lance Lockridge for his third touchdown pass of the first half. Cougar safety Kyler Lucas made a great play on the two-point conversion, knocking Tuttle out of bounds just before he was about to cross the goal line. The conversion was no good and LCC found itself down 19-6 to undefeated Montgomery County.

Montgomery County received the ball to begin the second half and started on their own 39-yard line. On 3rd and 15 Tuttle scrambled for 22 yards and the Cougars committed a personal foul on the next play to give the Indians a first and goal. Three excellent defensive stands forced a 4th and goal play in which Tuttle was sacked by a combination of Nick Mullins and Willie Smith. Coach Rains made the adjustment at halftime to move Mullins back to the defensive tackle position he played last year and it paid immediate dividends.

Hunter Hall was a man on a mission in the first LCC offensive drive of the third quarter. Hall had runs of 18, nine and 13 yards to start of the possession. Then facing 3rd and 8 Blair found Tyree on a screen pass for a 12-yard gain. The drive ended when Hunter Hall was hit from the blind side and fumbled the ball. The Indians recovered on their own 12-yard line and the 10-play, 76-yard drive by the Cougars resulted in zero points. Montgomery County was forced to punt on their next drive after Cougar defensive end Jordan Boggs sacked Tuttle on 3rd down.

The LCC offense had a three and out and the fourth quarter began with the Indians facing a 4th and 1 from midfield. Montgomery County went for it and Preston ran up the middle for six yards before being tackled by Ryan Alzuraqi. Preston ran for two more first downs to set up a touchdown run by Aaron Botts from six yards out. The two-point conversion was missed and the Cougars were down 25-6 with 9:02 left in the contest.

After another Cougar turnover, freshman Seth Hall shot through the line to record a tackle for loss. Then on the next play Tyree forced a fumble that Mullins recovered for LCC. On the first play Blair scrambled for 21 yards. Blair connected with tight end Dylan Kincer on a 15-yard seam route and then Hunter Hall got the call on a draw play and scampered 11 yards to get into the red zone. On the next play Blair was flushed out of the pocket and was tackled to the ground when stripped of the ball well after he was down. The referee ruled it a fumble and the home crowd was none to pleased with the call. There were no more points scored the rest of the game and the Cougars had falled 25-6 to still undefeated Montgomery County.

Letcher Central fell to 0-4 on the year, but the defense played by far its best game of the year. Tyree had 11 tackles, Fox had nine tackles including a sack. Mullins and Alzuraqi had eight tackles each. Coach Rains had obviously worked on the defense all week after they struggled mightily last week at Franklin County.

They blitzed on nearly every play and created pressure on Matt Tuttle the entire game. Montgomery County only had 264 yards of total offense for the game.

Unfortunately, the LCC offense was its own worse enemy all game long. The Cougars continuously drove the ball into the red zone and ill-timed turnovers and penalties stopped drive after drive. Blair completed 15 passes on 31 attempts for 152 yards. Montgomery County played a cover two defense and double covered Keaston Hall the entire game. Keaston Hall was held to 51 yards on three catches, but one was a spectacular over the shoulder catch. Blair and the Cougar coaching staff recognized the defense and audibled to runs. The result was the best rushing attack of the year for the Cougars. Hunter Hall rushed for 72 yards on 12 attempts and Blair gained 42 yards on five attempts. Tyree rushed for 22 yards on 4 attempts. Dylan Kincer had three receptions for 27 yards and Josh Boggs hauled in two passes for 24 yards.

Coach Rains still has the Cougars playing their hearts out. Look for the offense to score early and often at Lawrence County.