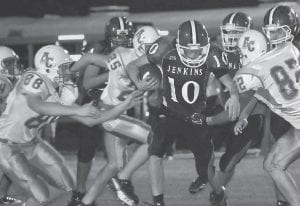 It was another Friday night and the Cougars of Letcher were on the road to take on the Middlesboro Yellow Jackets.

The Yellow Jackets are in their first season under new head coach, Randy Frazier. Frazier was a former star at Whitesburg High School, and he was also an outstanding player at Morehead State. After college he had a small stint at the pro level with Kansas City. Frazier has been coaching for several years, and he has been successful. He will inherit a struggling Yellow Jacket program and will have hopes of getting Middlesboro back to the prominence it once held.

The Yellow Jackets were coming off of a thorough trouncing at the hands of nationally ranked Alcoa, Tenn., 64-0, and were looking to get back on the winning track against the Cougars. The Cougars, on the other hand, were coming off a 32-21 victory over South Laurel in which they put up a lot of off ense and looked good on defense.

Middlesboro won the toss and deferred to the second half. The first half was a defensive struggle as neither team could find much rhythm. The score was 0-0 at the break, but the excitement kicked in after halftime. The Cougars opened the second half with a punt after being held on their first series. The Yellow Jackets fumbled the punt and the Cougars recovered at the Yellow Jacket 40-yard line.

Jesse Rose picked up 22 yards on first down, and the Cougars were in business at the 18-yard line. They moved inside the 10, but on the next play the ball was snapped over Logan Johnson’s head and the Cougars lost 15 yards. They had to settle for a field goal, and Sydney Fields was called on to try from 33 yards out. It was good from 45 as he nailed it, and the Cougars went on top 3-0, with 6:46 remaining in the third quarter.

The Yellow Jackets came out hoping to get some off ense going after losing the fumble and giving up 3 to the Cougars as quarterback Chase Roark and company came back on the field. The Cougar defense would have none of it, and Koree Stewart and Matt Landeau came up big to force a punt.

The ball traveled 51 yards, and the Cougars were backed up deep in their own territory. A penalty moved them inside the 10 to their own 8. Unable to move against the Yellow Jackets, the Cougars punted it back.

The punt was a line drive that was caught and returned quickly to the Cougar 30-yard line. The defense had no time to get down the field, and the Jackets were in business. Roark hit Fields down at the Cougar 9, and then found Zack Riddle all alone in the back of the end zone and the Yellow Jackets had the lead 6-3 after 3 quarters.

After no off ense in the first half it was a shootout after halftime. Logan Johnson returned the kickoff all the way to the Middlesboro 45 and a first down. Jesse Rose came up big again on first down as he took off for 33 yards all the way to the Jacket 12-yard line and another first down. He moved the ball to the 4 later in the drive, and Logan Johnson scored from there and the score was 9-6 early in the fourth quarter.

Roark brought his off ense back out and went to the air. The Cougars were unable to contain Roark late in the game, as he got in a rhythm. He hit Zach Little on the Cougar 11-yard line and then he threw a strike on the next play, and the score moved to 13-9 Jackets with 8:25 remaining.

The Cougars marched right back. Drew Bentley picked up 15 to the Cougar 35. Johnson moved it to the 48 and then tried a halfback option with freshman quarterback Sizemore. It worked, and the Cougars were down on the Jacket 34. Bentley and Johnson moved the ball to the 20 on consecutive runs with 4:45 in the game.

They took a big step forward by knocking off the 5A Cougars, and the Cougars took a step back with the loss. The final was 13-9, and both teams records stand at 1-1.

On offense for the night the Cougars racked up 227 total yards. They picked up 212 of those on the ground. They were led by Logan Johnson with 97 yards on 17 carries. He picked up the Cougars lone touchdown. Jesse Rose had a big game with 73 yards on 16 carries. Drew Bentley had 35 yards on 7 carries, and Sam Sergent picked up 7 yards on 2 carries. Johnson completed 1 pass to Koree Stewart for 15 yards, and that would be it.

The Cougars had their opportunities at the end of the game, but the two turnovers were crucial and the Cougars had a long bus ride home. They will now regroup and get ready for next week.

Chase Roark lit up the sky for Middlesboro with his passing game and the Yellow Jackets will make some noise in Class 2A.

The Cougars will finally get to come home and host a game next week as the Hazard Bulldogs will come calling, and you can bet they will face a fired-up bunch of Cougars. You know what happens when cats and dogs get together. It should be a big game.