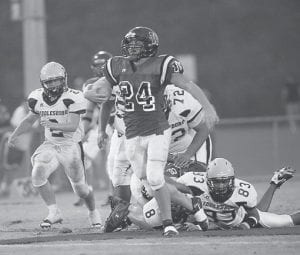 NEXT UP — Letcher County Central will continue its run in play-offs this Friday with a visit to Whitley County for a rematch with quarterback Jamie Lebanion (above) and his troops.

It was the game of the year this past Friday night as the Letcher County Central Cougars traveled to Harrodsburg to take on the Titans of Mercer County in the second round of the Class 5A playoffs.

The Titans are coached by Marty Jaggers and were coming off a first-round victory over Perry Central (57-21). Yes, that is the same Perry Central that handed the Cougars one of their two losses on the season, 33-32. Their only other loss came to Whitley County (22-14).

The Titans are a senior-dominated team and are big, much as Southwestern was the week before. Their record (6-5) did not do justice to the caliber of team they are. Two of their losses came to Boyle and Rockcastle County. The Cougars also pretty much had their way in week one by putting a pretty good spanking on Southwestern 34-6 to advance.

It was another ice cold night but fans were out in big numbers for the Cougars as they always are. The Cougars received and returned a short kick out to the 40. Charlie Banks opened with a pass to McKenzie Smith down to the Titan 46. He then found Dustin Brown down on the 37, but a loss of 2 would set up a fourth-and-2 and the Cougars would punt.

The Titans took over on their own 10-yard line. They moved and moved quick as J.D. Gilliam picked up 11 in two plays for a first down. Quarterback Andrew Cornish completed a pass to Brett Cecil at the Cougar 47, then it was Gilliam to the 40 and Dean for 14 more to the Cougar 26. But then the wheels fell off as they fumbled on the next play and McKenzie Smith recovered for the Cougars to stop the Titans’ drive.

The Cougars wasted no time as Banks connected with Travis Stephens for 10 yards and a first down. Greg Collins took it to the 42. Back-to-back passes to Dustin Brown and McKenzie Smith gave the Cougars a first down at the Titan 29 with 2:27 in the first quarter.

The Cougars called a time-out and called the plays and Banks took the ball on first down to the 22 for five yards and then on second down he faked a option play and went inside with the little shuffle pass to Travis Stephens. The Titans were all going for the fake but Stephens was going for the end zone from 22 yards out and a 6-0 Cougar lead. Banks quickly changed his shoe and kicked the extra point for the 7-0 lead at the end of one quarter.

The Titans were not impressed as they returned the kickoff deep into Cougar territory. They moved all the way to the Cougar 21 and faced a fourthand one and that’s when the Cougar defense led by Nathan Adams and Caleb Frazier stepped up and stopped the Titan running back in his tracks and force the Titans to turn the ball back over to the Cougars.

The Cougars put together a drive that would get them out to the 49 of Mercer County, but they were not able to move so the big defensive stand would produce nothing but a punt back to Mercer County. The Titans got a couple of penalties including a late flag after a play and they punted it back to the Cougars.

The Cougars started at the 20- yard line and on the first play Banks took off up the middle for a 40-yard run to the Mercer 40- yard line. They moved on down to the Titan 24 with 2:23 left in the half. With time running out, the Cougars attempted a field goal from about 37 yards. Banks changed his shoe and calmly kick the field goal to give the Cougars a 10-0 lead. He would then serve hot dogs and change the tire on the bus and then get ready to go back on the field. The score stood at the half.

The second half opened with the Titans on offense. They got out to the 40 but were forced to punt by a fired-up defense from the Cougars. The Cougars started at their own 27 and on first down it was Banks again as he took off all the way to the Titan 39 and a huge first down. But the drive would stall as the Titan defense stiffened up or froze up and stopped the Cougars on a fourthand one to give the Titans some momentum.

Just when everything was going right the Cougars fumbled on first down and Mercer was all over it deep in Cougar territory. They would not be stopped this time as Gilliam took it up the middle for 22 yards and the touchdown to make the score 10- 7 Cougars.

With all the momentum shifting to the Titans, the Cougars punted again and the Titans quickly moved into Cougar territory against a very tired defense that had stayed on the field most of the third quarter. Gilliam moved the Titans to the Cougar 7-yard line but the Cougar defense found enough strength to stop the Titans on another big fourth down play and give the ball back to the Cougars on the 7 yard line.

On the first play Banks stepped into the end zone to attempt a pass. He was hit and threw the ball but it was considered intentional grounding which resulted in a safety for Mercer County and two more points to make the score 10-9, but more importantly the Titans got the ball back because the Cougars had to free kick back to them.

The Cougars got a penalty on the play and eventually had to kick off from their own 10-yard line. The Titans quickly moved the ball after starting at the Cougar 45. They got down inside the 10 before a penalty put it back on the 16. With 4 minutes left in the game, the Titans attempted a field goal by Kyle Chadwick. Just as Charlie Banks did earlier in the game he nailed it and the Cougars trailed for the first time all night 12-10 with 2:45 left in the game.

It was simple; the Cougars must score or go home. They started on their own 22. A pass interference call on Mercer County moved the ball out to the 37 and a first down at the 2:08 mark. After two incomplete passes, Banks connected with McKenzie Smith at midfield for a first down but time was running out.

Banks then called his own number and picked up 15 yards to the 35 of Mercer. Greg Collins took it to the 20 and then they got inside the 15, but Banks really took a lick and had to come out of the game. With Banks injured it was up to freshman Logan Johnson to try to move the Cougars over the goal line. He handed off to Greg Collins and he took it to the one-yard line and the Cougars called a time-out. After the time-out the Cougars apparently scored but a procedure penalty put the ball back on the 6 and the Cougars called another time-out.

With bells still ringing in his head, Charlie Banks came in with time running out to attempt a field goal. Charlie had never kicked anything but extra points and now he was called on to win the biggest game of his career with his foot. He simply stepped up and kicked it through and that was it, 13-12 Cougars with less than two seconds in the game.

The Cougars squib kicked the ball on the ground but it would bounce off the Titans and the Cougars got the victory. And what a victory it was as they improved to 10-2.

Banks was simply, well Charlie Banks. He gets it done on the ground or through the air or now with his foot as the two field goals would show. It was an amazing night for Banks as he picked up 132 yards on the ground and 147 through the air. The Cougars picked up 310 total yards against a very good Mercer defense. The Cougar defense was simply awesome on this night and they really shut down a powerful running game of Mercer County when it meant the most.

Now it’s on to the Elite 8 for the Cougars and a rematch with district rival Whitley County. Whitley has really stepped up its game and its 11-1 record proves it. Whitley County beat Pulaski County to advance to the matchup with the Cougars.

Whitley beat the Cougars 22- 14 at Letcher Central back in October. The Cougars turned the ball over twice in that game and if they can keep the turnovers down they can knock off Whitley and advance to the Final 4.