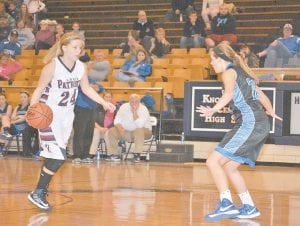 The Cougars continue on the road next week with games at Shelby Valley on January 15, and at June Buchanan on January 19.

The Cougars battled both an emotional let-down from losing a tough one the night before at Knott County Central and an emotionally keyed up bunch of visiting Cavaliers in downing Jenkins on January 4.

LCC struggled with early shooting woes, but managed to lead the Cavaliers 11-7 after the opening quarter. Despite losing junior forward Josh Owens to an ankle injury early in the second quarter, the Cougars rode the hot hand of senior guard Cody Gregory to a commanding 34-19 lead by the intermission. Gregory was six for seven shooting — including two of three from behind the arc in the first half — for 15 points. He cooled off in the second half, finishing six of 14 for a game-high 17 points for the 10-5 Cougars. 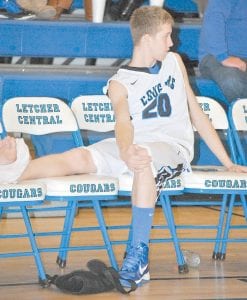 The inside/outside combination of Koty Sexton and Randy Potter kept the Cavs close early. Sexton’s lay-up with 3:40 left in the first half cut LCCHS’s lead to 18-16.

LCC, fueled by three old-fashioned three-point plays, ran off 11 unanswered points for a 29-16 lead with 2:12 left in the first half. The Cougars never looked back after that.

Josh Collins chipped in with six points. Casey Hall and Jacob Campbell added four points each. Chippy Frazier combined with Cody Gregory for eight steals to frustrate the Cavs’ offense all game. Frazier wound up with 15 points and four rebounds. 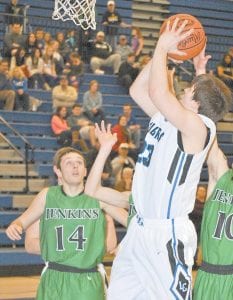 Letcher Central’s Dylan Kincer went up for a shot during the Cougars’ win over Jenkins. No. 14 for the Cavaliers is Koty Sexton. (Photo by Brandon Meyer/B. Meyer Images)

Zane Blair rebounded from his one-point game the night before with solid play on both ends of the court — 15 points, 10 rebounds, two assists and two steals with just one turnover. Sam Robinson finished with seven points and Dylan Kincer added three. Hunter Hall scored two points.

For the game, LCC’s defense forced Jenkins into 20 turnovers while making just 10. Jenkins shot 37%, making 18 of 49 field goal attempts and pulled down 37 rebounds.

Sophomore Chase Cornett came off the bench to give the host Patriots a huge boost in the final minutes as Knott County Central was able to outlast the Cougars in a match-up between the top two teams in this 53rd District.

LCC trailed 10-7 after the first quarter and 25-17 at the half as sophomore guard Cameron Justice scored 10 of his game-high 26 points.

After Cody Gregory’s jumper brought LCC to within 34-29 with 4:30 left in the third quarter, Justice took over the game and scored 13 of the Patriots’ next 17 points to extend KCC’s lead to 49-34 going into the final quarter.

At this point, LCC refused to quit. The Cougars picked up their defensive intensity and shut down Justice. They also took advantage of three Knott Central turnovers as they ran off 10 straight points to close with 49-44 on Chippy Frazier’s trey with 6:10 left to play.

Knott Central sophomore Evan Hall, who finished with a quiet six points, hit a layup to blunt the Cougars’ scoring run. Over the next three-plus minutes, LCC’s defense forced the Patriots into several turnovers, but the Cougars were unable to convert as they missed several makeable shots.

LCC still continued to play very hard. Dylan Kincer’s pair of free throws cut KCC’s lead to 53-49 with 2:30 left to play. Frazier’s layup with 1:38 left kept the Cougars within striking distance at 55-51, and when Evan Hall missed a pair of free throws, Cody Gregory’s layup made things very interesting, as the Cougars trailed just 55-53 with 1:20 left.

The Patriots’ Chase Cornett then broke the Cougars’ spirits by sneaking in behind the defense for two crucial baskets down the stretch that allowed the Patriots to hang on for the victory.

The Patriots out-rebounded the Cougars 18-14 in the first half and 32-29 for the game. The Cougars’ defensive pressure forced the Patriots into nine first-half turnovers, and 15 for the game.

LCC committed 11 turnovers through three quarters but just one down the stretch as they clawed back from a 15-point defi- cit in the final quarter.