Cougars to kick off season in Richmond this Friday 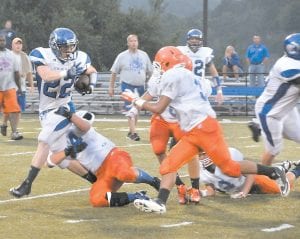 Letcher County Central senior running back Chris Tyree gets wrapped up by the Pike Central defense in last Thursday’s preseason scrimmage against the Hawks at Cougar Field. (Photo by Chris Anderson)

The Letcher County Central Cougars open their 2012 high school football season this Saturday night against Southwestern High School in the Roy Kidd Bowl. The game will be played at 5:30 p.m. on the campus of Eastern Kentucky University in Richmond.

The Cougars are coming off a disappointing four win 2011 season, but have renewed optimism thanks to the hiring of new coach Paul Rains. Coach Rains has an impressive résumé and background with the highlight being a 2009 state championship he won while coaching Lexington Christian Academy. Rains said Cougars fans should have something to look forward to this football season.

“I think they are going to love it,” Rains said. “Our offense is fast-paced. We don’t huddle. We don’t waste any time at the line of scrimmage. We get up there and we snap it. If we are having a great night, we may run 80 to 90 offensive plays in a game.”

Senior running back/linebacker Chris Tyree is very excited about the coming season and about playing for Rains.

“Coach is a great motivator and man of integrity,” Tyree said. “He makes us want to not only be better ballplayers, but better men as well.”

The Cougars lost many key players from last year’s team, and Tyree said that although the team is young, they plan on getting better each week and want to be a major factor in the playoffs.

Players to watch on offense for the Cougars are senior receiver Keaston Hall, who had a 74-yard touchdown reception in a scrimmage against Pike County Central last Thursday night, and his brother, sophomore Hunter Hall, who is expected to split time at tailback with Tyree.

On defense, look for junior Nick Mullins to improve on his double digit sack total from last year and senior linebacker William Keith Boggs to wreak havoc on the opposition.

LCC faces a difficult schedule that starts off with a 10-win Southwestern team and then two weeks later they travel to Franklin County to face Mr. Football frontrunner Ryan Timmons who has world class speed.

The first home game is on Sept. 7 against Montgomery County at 7:30 p.m.