Cougars usher in new era with a victory 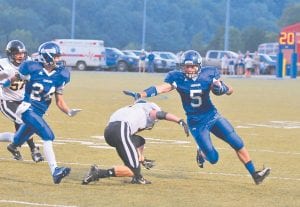 The much-anticipated 2013 Letcher County Central Cougar football season began with a rousing 47-0 victory over the visiting Berea Pirates. It was the first game for new Coach Mike Holcomb who brings an impressive resume from his 30-year stint at Breathitt County. Holcomb’s teams won three state championships and had nine undefeated season during his tenure with the Bobcats and LCC fans packed the stands to see just what was in store for the upcoming season.

Letcher Central won the opening toss and elected to take the ball first. Sophomore transfer Jaylyn Williams wasted no time showing what all the buzz from summer practice was about. Williams took a handoff up the middle for 13 yards. After a facemask penalty moved the ball into Pirate territory, LCC quarterback Zane Blair found Hunter Hall for a 13-yard gain that set up a 4th and 2 from the Berea 19-yard line. Jaylyn Williams got the call on a sweep play and simply outran all the Pirate defenders around the right side to get in for the touchdown. The extra point by kicker Dustin Holbrook sailed through the uprights to make the score 7-0 with 7:56 left to play in the first quarter. 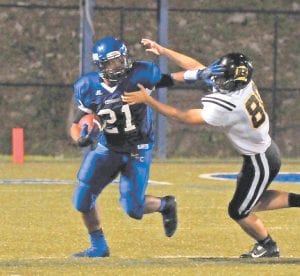 IN HAND — LCC’s Jaylyn “Boobie” Williams avoided a Berea defender on a punt return before moving the ball toward midfield during Friday’s winning effort for the Cougars. (Photo by Chris Anderson)

Berea started the possession on their own 35-yard line and after gaining one first down, Letcher Central junior Jordan Boggs sacked Berea quarterback Kevin Reed to force a punt.

The Cougars had a nice punt return to start their next drive in great field position. Hunter Hall ran up the middle for eight yards but a holding penalty put LCC in a third and long situation. Zane Blair showed great pocket presence to buy extra time and found receiver Ryan Alzuraqi for a 19-yard gain and a first down. Williams had a 22-yard scamper, which led to a six-yard touchdown run by Hunter Hall on the next play. The extra point was good and with 2:16 left to play in the first quarter the Cougars led 14-0.

Dustin Holbrook’s kickoff went through the end zone for a touchback. Senior defensive lineman Billy Sturgill tackled Berea running back Jason Strong for a fouryard loss to force 3rd and 14 but unfortunately for the Cougars a facemask penalty on the last play of the first quarter gave Berea an automatic first down and kept the drive alive. Pirate running back Corey Mowery slammed right up the middle for a 15-yard gain to penetrate into Cougar territory for the first time in the game. The LCC defense stiffened and Jaylyn Williams returned the Berea punt 32 yards.

Blair completed a 16-yard pass to Houston Watts on a hitch route on the first play of the drive. Backto back penalties and a bad snap that sailed over Blair’s head had the Cougars facing a unthinkable 2nd and 62 from their own 11-yard line. Williams gained 25-yards on a run around the right tackle. On the next play Devin Blair caught a perfect pass from Zane Blair on a go route and took it in for the score from 62-yards out. Holbrook connected on his third consecutive extra point to increase the LCC lead to 21-0 with 5:41 left in the first half.

Faced with a 3rd and 6, Berea quarterback Kevin Reed eluded pressure and scrambled for a first down close to midfield. The defense buckled down again and Chaz Bryant made an excellent tackle on third down to force a punt. The Cougars struck quickly on their first play of the drive when Jaylyn Williams lined up at the slot receiver position. Williams ran a seam route and although closely defended Zane Blair delivered the ball right on target. The Pirate defender grabbed Jaylyn’s left arm while the ball was in the air and Williams caught it one handed broke free of the tackle and cut between two other defenders on the way to a 75-yard sportscenter top play nominee type touchdown. LCC defensive lineman Nick Mullins sacked Reed as time ran out and the Cougars went into halftime ahead 28-0.

Coach Mike Holcomb could not have imagined a better first half. The Cougars gained 299 yards on offense and held Berea to just 66 yards. The offense committed zero turnovers while scoring on all four possessions, two touchdowns on the ground and two via pass. The balanced offense they showed in the first half will bode well when the Cougars get into the harder part of their schedule later in the season.

Berea received the kickoff to begin the second half and LCC defender Aaron Thomas arrived at the returner instantly and dropped him at the Berea 24-yard line. Tackles for loss by Hunter Hall and Jordan Boggs caused the Pirates to punt. Williams received the punt sprinted to the right and got a great block by Aaron Tackett to pave the way for the 54-yard touchdown to make it 34-0 with 10:16 to go in the third quarter.

On the ensuing kickoff, Letcher Central freshman Triston Polly forced a fumble that Berea pounced on back at the 16-yard line. Jordan and Keith Boggs combined on a sack on third down and LCC started their next possession close to midfield. On first down Zane Blair threw a swing pass to Hunter Hall that fell to the ground and after being recovered by the Pirates was ruled a lateral and gave Berea by far their best field position of the game. The Letcher Central defense stood strong. Seth Hall and Jacob Kiser combined on a quarterback sack to force a fourth down play where a bad snap forced the punter Cory Mowery to try and run for the first down. Mowery appeared to have wide open field but a hustling Aaron Tackett caught him from behind and tackled the Berea player just short of the line to gain.

Hunter Hall gained 28 yards on first down and on the next play Zane Blair showed his maturation as a passer and threw a check down pass to Williams who scampered in for the score from 24 yards out. Holbrook made the extra point to lead 41-0. By rule the clock runs constantly in high school football when a team is ahead by more than 40 points and the fourth quarter had very few plays occur. The only major action was on the last play of the game when the snap sailed over backup Berea quarterback Dalton Gadds head into the end zone and Letcher Central’s Dalton Hayes pounced on the ball to make the final score 47-0 in favor of the Cougars.

If the first game is any indication of the type of season for the Cougars then it is going to be exciting year. Coach Holcomb is known as being a quarterback guru and Zane Blair had an excellent game, completing 10 of 15 passes for 246 yards and 3 touchdowns. Jaylyn Williams had two receiving touchdowns; a rushing touchdown and a punt return score on his way to over 300 total yards. Hunter Hall averaged almost 10 yards per carry and had a six-yard touchdown. Devin Wright flashed his speed with a 64-yard touchdown reception. The defense held Berea scoreless, led by junior Jordan Boggs who had 5 tackles for loss and two sacks. Keith Boggs and Stephen Fox had six tackles apiece. Jacob Kiser, Nick Mullins, and Seth Hall each had a sack. Billy Sturgill had two tackles for loss. Aaron Thomas and Aaron Tackett each had strong defensive performances as well.

Letcher Central will look for its second win of the season Friday night when they host McCreary Central at Cougar Field at 7:30 p.m.