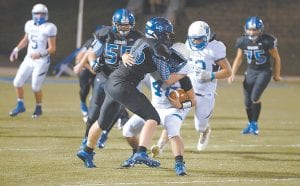 A Letcher County Central defender stopped a Breathitt County ball carrier in his tracks during the Cougars’ win over the Bobcats on Friday night. (Photo by Chris Anderson)

Letcher County Central improved its record to 3-2 after a 42-28 win over visiting Breathitt County.

LCC sprinted to a 28-0 lead midway through the second quarter and coasted to the victory to build momentum into district play, which begins next week at Perry Central.

Breathitt County received the opening kickoff. On the second play, Cougar defensive back Tannar Lucas intercepted the Cameron Stacy pass and returned it to the LCC 31-yard line.

On the first play for the Cougar offense, Lucas came in motion and took a shovel pass from Nick Sergent and went 69 yards for a touchdown. Jayson Buttrey made the extra point to give LCC a 7-0 lead with 10:54 left in the first quarter.

On second down, linebacker Avery Stamper absolutely annihilated Bobcat running back Tyson Gross after he caught a screen pass. Then on third and 13 linebacker Kylar Sturgill broke up a pass attempt for a Breathitt County punt.

The Cougar offense got two first downs, but could move no farther and turned the ball over on downs.

On third and 10, Stacy completed a 37-yard pass to receiver Ethan Little down to the LCC 23-yard line. Later in the drive, Gage Isaacs made a spectacular interception in the end zone and returned it 66 yards, but a penalty on the return brought the ball back to the LCC 35-yard line.

After a LCC punt, Cougar defender Logan Fisher caught ball carrier Braden Manns from behind and not only stripped the ball away, but returned it 36 yards to the Bobcat 6-yard line.

Two plays later Tyler Isaacs had a three-yard touchdown run right up the middle. The Buttrey point after increased the lead to 14-0.

Breathitt County had a three and out. Preston Maggard took a handoff up the middle and bounced it to the outside for a 42- yard gain to the 10-yard line. The offense couldn’t punch it in and a missed field goal gave the ball back to the Bobcats.

After a 40-yard pass by Stacy, Logan Fisher forced his second fumble of the game. This time it was recovered by LCC safety Tyler Boggs.

The Cougars capitalized on the first play with a 53-yard touchdown pass from Sergent to Lucas on a wide receiver screen. The extra point was no good to keep the score at 20-0.

Breathitt County had a nice drive inside the LCC 10-yard line, but couldn’t score and turned the ball over on downs.

Preston Maggard gained 61 yards on a middle screen pass from Sergent, leading to a oneyard touchdown run by Tyler Isaacs. Quade Adams scored the two-point conversion on a sweep around the right side of the line to give LCC a 28-0 lead.

Stacy threw a 67-yard touchdown to Little and the two-point conversion was good for Breathitt County’s first point of the game, making the score 28-8 with 2:47 left in the first half.

The Letcher Central offense answered with a score right before halftime. Sergent threw a 44-yard bomb to Blake Brashears. Then, Quade Adams caught a five-yard out pass and broke two tackles on his way to a 33-yard touchdown to make the score 34-8 at halftime.

The Cougar offense went three and out to start the second half. Breathitt County was going in for a score when Gage Isaacs caused a fumble and recovered it at the LCC 4-yard line.

The offense couldn’t get a first down and the punt was returned by Ethan Little to the LCC 15-yard line. Manns scored on a sevenyard run and the two-point conversion cut the Letcher Central lead to 34-16 with 4:18 left in the third quarter.

Sergent used play action to find Brashears behind the defense for a 58-yard gain. On the next play, Adams had a two-yard touchdown run. Tyler Isaacs ran in the two-point conversion to make the score 42-16.

Letcher Central gave up two scores in the fourth quarter to make the final score 42-28 even though LCC dominated much of the game. The Cougars are now on a two-game winning streak and will look to open district play Friday with a victory at rival Perry County Central.