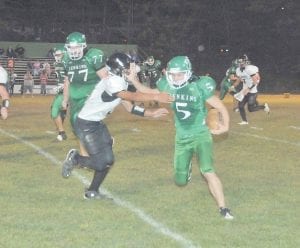 JENKINS GETS FIRST WIN — Jenkins running back Nick Taylor stiff-armed a South Floyd defender as he rushed upfield for a long gain during the Cavaliers’ 7-0 win over the Raiders last Friday night. The win is the first for the Cavaliers under new head coach Larry Maggard. (Photo by Chris Anderson)

After opening with big wins over South Laurel and Middlesboro, the Letcher Central Cougars traveled to Hazard this past Friday to take on the Bulldogs.

Hazard and Coach Mark Dixon made it to the state championship game last season in Class 1A before falling to eventual champion Central. They finished with a record of 11-4, but gone to graduation are stars Tyler Olinger and Michael Campbell.

The new look Bulldogs are still favored to be one of the best teams in Class 1A football. They opened their season with a big win over Leslie County, but now the Cougars of Letcher Central would come to town.

Sporting a number 5 ranking in Class 5A football, the Cougars with sophomore Logan Johnson running the offense attempted to come to Daniel Field and put a beating on the Bulldogs. The Cougars won the coin toss for the third week in a row and deferred till the second half.

Hazard took the opening kick and returned it to the 37. Junior quarterback John Combs guided the Dogs with Eric Back as the big gun at tailback. Back was a star on the Bulldog basketball team.

Hazard quickly moved to the Cougar 10-yard line after a big run by Combs and a pass from Combs to Austin Johnson. But the Cougar defense forced a field goal from 31 yards from Delpont to give the Dogs a 3-0 lead.

The Cougars quickly came back. After a huge kickoff return to the Bulldog 22 by Jesse Rose, it took one play as Logan Johnson burst up the middle and sailed to the end zone. The Cougars led 7-3 with a minute and a half gone off the clock in the first quarter.

The defense forced a Bulldog punt on the next possession, and the Cougars started at the 20-yard line. Senior Greg Collins picked up 27 yards on the first play from scrimmage as he got to the 47-yard line. A pass from Johnson to senior Chase Adams picked up 9 more yards. Johnson then found senior McKenzie Smith at the Dog 38- yard line. Johnson took over on the ground as he hammered his way to the Bulldog 15-yard line on a fourth down and four for a big Cougar first down.

After a reverse by Dustin Brown moved the ball to the 5-yard line, Johnson scored his second touchdown of the night two plays later. The extra point was no good and the Cougars led 13-3. This really ignited the huge crowd of Cougar faithful that were on hand.

Hazard woke up in a hurry. A good kickoff return put the ball at the 42-yard line and Combs and Co. quickly moved to the Cougar 26. A pass to Meehan moved the ball to the Cougar 18 and on the second play of the second quarter Combs hit Meehan with a strike in the end zone and a 13-10 score after the extra point was good.

Both teams punted on their next possessions and the Cougars were forced to punt again but the ball was shanked and the Bulldogs had great field position at the Cougar 31-yard line. They moved to the 21 behind another Olinger kid. This kid is only a freshman and he will be a force to deal with. After Hazard moved to the Cougar 2- yard line, the defense forced another field goal by Delpont and the score was 13-13 and that would stand at halftime.

The second half would start the same way as the first quarter did for the Cougars. Trying to regain the momentum, the Cougars got a gift on a third down and a mile play. Hazard was called for a face mask penalty that gave the Cougars an automatic first down at the Bulldog 42-yard line. Johnson hit Jesse Rose at the 25-yard line on a big third and 10 play for a Cougar first down. Johnson ran the same play he ran on his first carry of the night, and got the same result. He scored a touchdown straight up the middle and gave the Cougars a 21-13 lead. He also scored the 2- point conversion.

Almost on cue, the Bulldogs marched right back as Eric Back finally got rolling on the ground and moved the ball quickly to the Cougar 6-yard line. Combs took it home from there on a quarterback keeper and it was 21-21. The third quarter ended with the same score and the fourth quarter was sure to be a barnburner.

A personal foul against the Cougars opened the fourth on a punt play to give the Bulldogs a first down at the Cougar 43-yard line. The Cougar defense really went to war and forced a big Bulldog punt and the Cougars took over at their own 22 with 9:04 left in the game.

Collins picked up a first down out to the 33 yard line and then picked up 15 more out to the 48 and another first down. A personal foul on the Cougars put the ball back to the Cougar 37, but now it was time for the old trick play. Johnson lateraled to senior Nathan Maggard and Maggard passed to a wide open senior Robbie Huff to the Bulldog 23-yard line. It caught the Bulldogs completely off guard. This is the second time this play has worked.

After Greg Collins moved inside the 10-yard line, Jesse Rose scored on a still reeling Bulldog defense and the Cougars had retaken the lead 27-21. The conversion by Johnson made it 29-21.

The Cougars really fooled everyone on the kickoff as they tried an onside kick, and it was successful. They got the ball at the Bulldog 46.

Sensing the game winding down, the Cougars moved behind Johnson to the 31. Johnson found Travis Stephens on a pass down on the 2-yard line and Dustin Brown took it home from there and the score ballooned quickly to 35-21.

Hazard’s final drive was stopped and the Cougars had come to town and put and an 18- game home winning streak to an end for the Bulldogs.

This was a huge win for the Cougars against a very good Hazard team. They moved to 3-0 while Hazard fell to 1-1.

Now the game everyone has been waiting on will happen this Friday night at Ermine as the Belfry Pirates and Coach Phillip Haywood come to town. Coach Hillard Howard and his staff would like nothing better than to send Coach Haywood back to Pike County with a big loss, and the way the Cougars are playing that very well could happen.