Cougars win; Clay next up

The Letcher Central Cougars, fresh off a big win over Greenup County, were back home Friday night to open their district schedule against the Commodores of Perry Central. Both teams entered the game at 1-1.

It was a great night for football. The Commodores won the toss and elected to receive. They returned the ball to their own 41, but a face mask penalty against the Cougars gave them great field position at the Cougar 42-yard line. After three short gains Perry Central quarterback Jordon Amos attempted to pass on fourth down, but it was picked off by the Cougars’ Dakota Brock on the Cougar 29.

It didn’t take long for the Cougars to get going. After Perry Central sacked Cougar quarterback Charlie Banks on second down, it brought up a third and 17. Banks connected with senior Stacy Phillips out to the 40 for a Cougar first down. He hit Phillips again for 12 more down to the Commodore 48. Banks would keep it on the next play and go straight up the middle untouched for 48 yards and the touchdown with 6:24 to go in the first quarter. Senior Colton Cook would add the extra point and it was 7-0. 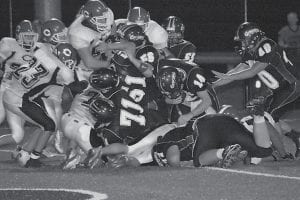 It was time for some Cougar defense to step up and step up they did. The Commodores could not move and the Cougars forced Amos into an intentional grounding on third down. On fourth down, junior Daniel Collins got a tackle in the backfield for the Cougars and Perry Central turned it over on downs.

The Cougars wasted no time as Banks and company drove to the Commodore 31 as the quarter ended. Banks picked up most of the yards on this drive on the ground.

Early in the second quarter he hooked up with Stacy Phillips on a beautiful pass for 28 yards and the score. Cook tacked on the point after and it was 14-0.

Perry Central would keep shooting itself in the foot. On their next drive the Commodores moved to the Cougar 46 and promptly fumbled the ball back to the Cougars as star running back Dimetri Travis coughed it up. The Cougars would get the ball at the Commodore 35-yard line.

Dakota Brock picked up 22 yards down to the Commodore 13-yard line and, after a Cougar penalty, Terry Tolson picked up 14 to move the ball back inside the 10-yard line. Banks scored his second touchdown of the night as he went in from eight yards out to extend the lead to 21-0 after Cook hit the point after.

The Commodores could not get anything going in the first half. They would fumble again on their next possession and junior Richard Shepherd recovered at the Commodore 20 yard line. Banks found senior Devin Johnson on a pass down to the 2-yard line, and Banks scored again from one yard out. The game started to get out of hand as the Cougars jumped out 28-0 with 4:08 in the second quarter.

The Commodores would not quit and on their next series Amos hit Travis over the middle and he streaked 70 yards to the end zone. The conversion failed but Perry Central had some new life at 28-6.

The Cougars went into their bag of tricks on their next series. They started at their own 45-yard line. Banks turned around and handed off to his back, who quickly pitched to Dakota Brock, and Brock (who has seen a lot of time at quarterback) found a wide open Devon Johnson for 55 yards and another Cougar score. Cook tacked on the extra point and it was 35-6.

The wheels really fell off for the Commodores after that. After starting at their own 37-yard line, they would fumble the ball and Dakota Brock scooped it up and ran it all the way for another Cougar score.

The Commodores tried to drive but sophomore Chase Adams put an end to that as he came up with the third Cougar interception of the half at the Cougar 14-yard line. The half would end at 42-6.

It seemed like Perry Central could move the ball at times but turnovers killed the Commodores. The Cougars played as good in the first half as they have since Letcher Central became a school and they capitalized on the Commodore mistakes.

Perry Central came out in the second half and put together a quick drive after a Cougar fumble. As Charlie Banks was attempting a pass his arm was hit and the ball was dropped. The Commodores recovered.

Amos got a big run to the Cougar 1-yard line and they would take it in from there. The score was 42-14 after the 2-point conversion.

This just lit another fire under the Cougars as they quickly moved to the Commodore 46. Speedster Terry Tolson got his turn and made the most of it as he sailed to the end zone from 46 yards. Colton Cook tacked on his seventh extra point to make it 49-14 with 7:05 in the third.

Perry Central came right back and drove to the Cougar 4-yard line. The Commodores’ starting quarterback went down on this play and would not return. Instead, his brother, John Amos, took over. It would get no better as the Cougars’ defense was everywhere. The score stood at 49- 14 after three quarters.

The Cougars would tack on two more scores in the fourth quarter as Ben Fisher got the first from three yards out. At this point there were new Cougars everywhere as sophomores Greg Collins and Travis Stephens saw action in the backfield. Collins got the final touchdown of the night as he went in from five yards out.

The final score was 63-14 as fireworks lit up the sky all night. There were stars galore for the Cougars on this night as they put up some big numbers. They ran the ball for 339 yards and passed for another 118. The ground game really looked sharp as the Cougars had nine players with five or more yards. Dakota Brock led the way with 82 yards followed by Tolson with 81. Charlie Banks would get 69 yards. He took a few sacks that hurt his numbers. He also scored three touchdowns on the ground and passed for another. Colton Cook was a perfect 9-9 on his extra point kicks.

This game was huge for the Cougars as they are now 1-0 in the district and 2-1 overall. The Cougars will travel to Clay County for another district match-up this weekend to take on the Tigers and star quarterback Zack Lewis.

This game could really have some big playoff implications for the Cougars. The Tigers are coming off a big district win over North Laurel 34-17. The Cougars have never beaten Clay County and it will take a great game on both sides of the ball for the Cougars to come out of Manchester with a win, but if they play like they did against Perry Central this could be the year they knock off the Tigers.