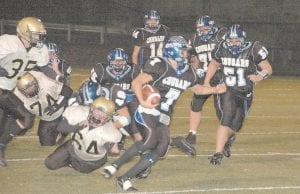 Letcher County Central will travel to northern Kentucky this week to meet football powerhouse Ft. Thomas Highlands in the third round of the Class 5A play-offs. The Cougars (11-1) became one of eight 5A teams to advance by defeating Clay County 48-37 in the District 8 final at Ermine. (Because of an early holiday deadline, game statistics do not appear.)

After his team’s 40-0 victory over Covington Catholic in the Class 5A District 5 final in Fort Thomas, Highlands High coach Dale Mueller told the Cincinnati Enquirer he doesn’t know much about the Cougars, who are in just their third year of play.

“When you’re getting ready for CovCath you don’t really think too much about the next team,” said Mueller.

The Bluebirds will go into Friday night’s game with Letcher Central as the No. 1 ranked team in Class 5A. They also will be seeking to tie the state record of 17 championships now held by Louisville Trinity. 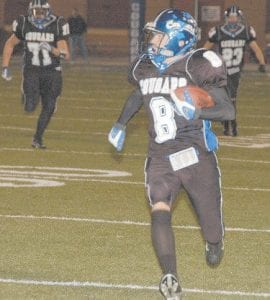 Sophomore running back Chase Adams (8) broke away for a long gain against Clay County. No. 71 is Zack Hogg. No. 23 is Devin Johnson. (Photo by Chris Anderson)