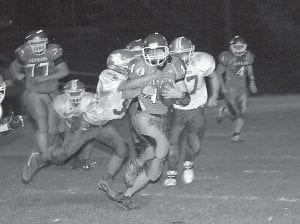 The Cougars closed out the regular season this past Friday night in Louisville against the Mustangs of Louisville Moore.

If Harlan County could somehow beat Bell County, it would win the district, but if it lost and the Cougars beat Moore, then the Cougars would be champions.

It was another wet night and the Cougars had almost as many fans in the stands as Moore, but were without Jesse Rose and Greg Collins.

The Cougars won the toss and elected to receive. Chase Adams returned the opening kick 36 yards to the Moore 48 yard line, and the Cougars were in business.

Quarterback Logan Johnson picked up 14 yards on second down on a keeper, and got the ball to the 36-yard line. A pass from Johnson to Dustin Brown was good for another first down on the Mustang 25.

After pass interference against the Mustangs the ball was moved down to the 12. It took one play from there as Dustin Brown scored, and the Cougars went up 7-0 after the extra point by McKenzie Smith.

The Cougar defense quickly forced a three-and-out from the Mustangs and a punt. They started from the 14-yard line, but the Mustang defense got a sack on Johnson and the Cougars were also forced to punt.

With the wind blowing, the punt was for only 14 yards and the Mustangs were in great field position at the Cougar 25-yard line. The Mustangs moved downfield, but a pass was intercepted on the Cougar 3-yard line by Logan Johnson, and the drive was stalled.

The Cougars gave the wet ball back to the Mustangs on a fumble at the Cougar 11-yard line. On a fourth-and-2 play, the Cougars were offsides and the Mustangs scored on the next play to tie the score at 7-7.

After another big return on the kickoff by Chase Adams, the Cougars started at the 44-yard line with just over a minute left in the first quarter. After a run to the Mustang 45 by Dustin Brown, the ball was fumbled and again the Mustangs recovered.

With new life the Mustangs moved down to the Cougar 10- yard line and had it first-and-goal, but a big sack by McKenzie Smith put the ball back on the 20, and the Cougar defense stepped up and stopped the Mustangs on fourth down and took over on downs.

The teams traded punts, and Koree Stewart came up with a huge tackle for a loss that forced the Mustang punt. The Cougars started from the 32-yard line, and Johnson moved the ball to the Moore 22-yard line on a couple of delay plays that the Mustangs could not stop.

From there Johnson hit Drew Bentley with a pass, and Bentley dove and made the catch in the end zone to make the score 13-7. The extra point snap was bobbled.

The Cougars kicked off, and the receiver bobbled the ball and dropped it. The Cougars were all over it and had first down on the Moore 15-yard line. The Cougars went to the air three straight times and were unsuccessful, but on fourth down Johnson found Chase Adams at the 3-yard line for a big first down.

Johnson scored on the next play and the Cougars had quickly taken the air out of the Mustangs’ sails and led 21-7. Robbie Huff scored the 2-point conversion. That is how the half ended.

The Mustangs opened the second half on offense, but it was more of the same as the Cougar defense forced a punt. The Cougars quickly established domination again as Travis Stephens returned the ball to the Moore 35. Drew Bentley picked up another first down to the 24.

After moving to the 16, Johnson found Chase Adams in the end zone, and the score moved to 28- 7. Smith’s kick was good.

The Mustangs did not mount any sort of a drive unless the Cougars gave them yardage on penalties. They turned the ball over again inside their own 15-yard line, and the Cougars recovered again.

Johnson quickly found Robbie Huff at the one, and Dustin Brown scored on the next play for his second touchdown of the game. The score was 35-7 after three quarters.

The Cougars called off the dogs in the fourth and tackled the Mustang punter before he could get the kick away. The Mustangs scored late in the quarter to make the score 35-14.

The Cougars did what they had to do and that was to beat Moore. They were led by Johnson with 158 yards through the air and three touchdowns.

Now the Cougars can celebrate officially as they are the champions of the district. Bell County crushed Harlan County so it is official. The Cougars will host Mercer at Ermine next weekend, and if they continue to win they could possibly play three games there before they have to leave.