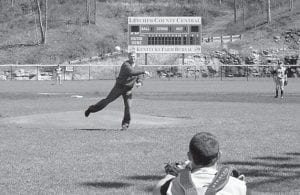 The visiting Indians scored an unearned run in the first inning after two errors, and added three more in the second behind three hits and two walks.

Letcher Central’s Chase Adams and Derek Walzer singled twice in the game, while Michael Watts and Matt Adams each singled once. The Cougars left the bases loaded in the fifth and seventh innings.

“We played two solid teams today,” said LCC Coach Bryan Dean. “We battled in both games and were a timely hit away from winning both. However, if our pitchers locate and challenge the hitters, and the defense plays better. We win both games. Eight games into the season we have played five good teams, and I told the kids after the game we could very easily be 8-0 right now, but on the other hand we could also be 3-5.”

After erupting for six runs in the first inning, the Cougars couldn’t manage to score a single run for the next six innings.

Matt Adams led the hit parade in the first inning, connecting on a 1-1 pitch for a home run. Walzer, Baker, and Chase Adams collected singles in the inning as well. For the game Watts, Smith, and Kincaid each added a hit. Chase Adams finished with three hits. Belfry capitalized on two Cougar errors in the second inning to score five unearned runs.

Trailing 4-1 going into the sixth inning on a wet, cold night on March 31, things were looking bleak for the Cougars. But with one out in the inning, Michael Watts drew a bases-loaded walk. Next up was Casey Kincaid, whose single to left field was followed by five consecutive hits.

Derek Walzer doubled to score Watts before Nathan Adams hit a two-strike pitch past the right fielder for a double to score two more and tie the game at 4-4. Tanner Sexton followed with the Cougars’ third straight double, giving Letcher Central a 5-4 lead.

After a six-pitch inning for Watts in the bottom of the sixth, the Cougars added two insurance runs as Kincaid, Walzer, Sexton, and Baker all hit singles. McKenzie Smith walked and also scored.

Ryan Brock, Dallas Adams, and Watts did the pitching chores for the Cougars, allowing only three Bulldog hits on the night.

“Getting off the hook in the top of the fifth with the bases loaded only allowing one hit was huge for us,” said Coach Dean. “McKenzie hustled back on a passed ball and tagged Searcy at the plate for the first out of the inning. Then two pitches later Chase makes a diving play in centerfield on a line drive that could have possibly cleared the bases.”

Tanner Sexton and Chase Adams combined for no-hitter in this April 1 game, which saw the Cougars send 21 batters to the plate in the second inning.