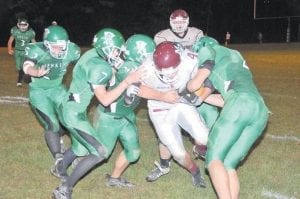 Magoffin proves too much for Jenkins Austin Bentley (52), Ryan Bentley (7), James Mullins and Kevin Brown attempted to stop another rushing gain by Magoffin County during the Cavaliers’ 61-18 loss Friday night at Jenkins. (Photo by Chris Anderson)

The Letcher County Central Cougars were riding high after knocking off Perry Central last week to go 1-0 in district play, but this was followed by a new week and a new opponent.

The Harlan County Black Bears at 3-2 and 0-1 in district play were just itching to get a shot at knocking off the Cougars on their own field.

The second-year school came to Ermine last year and almost pulled off the upset against the Cougars, but they were sent back across the mountain with a loss. This game would be both teams’ second district game.

Harlan County is coached by Tom Larkey and he already has assembled a team that is very competitive in only its second year. The Black Bears are a running team and average 250 yards on the ground. They play their home games at the old Cawood High School field.

Harlan County won the toss to start the game and went on offense. And just like the Perry Central game, the Cougars started out slow.

The Black Bears started on their own 12-yard line after a terrific hit on the kickoff by Cougar Jesse Rose. On the first play from scrimmage, T.J. Green went straight up the middle and took the ball all the way down to the Cougar 3-yard line. It took two plays for Cody Taylor to take it in, and it was quickly 6-0 Black Bears.

The Cougars returned the favor as they forced a Black Bear punt. Starting on their 39-yard line, Johnson found Chase Adams on a pass for a first down at the Harlan County’s 45, but that’s where it ended as the Cougars fumbled and the Bears recovered the ball.

It was a defensive struggle and neither team could do much on offense in the first half. The first half flew by as both teams kept it on the ground and the clock kept running.

After another Black Bear punt, the Cougars finally brought the Cougar faithful to their feet. Logan Johnson faked a hand-off and then delayed just enough to make the defenders hesitate, and that’s all Johnson needed as he shot up the middle and 69 yards later it was 6- 6.

The extra point by McKenzie Smith was good and with 2:27 in the half the Cougars took the lead. The score would stay the same and the first half came to an end.

The Cougars opened the second half on offense and after an on-side kick was recovered by Justin King at the 49-yard line, the Cougars were in business. But the Black Bear defense came out on a mission and quickly stopped the Cougars, highlighted by another quarterback sack to force another Cougar punt.

The Black Bears started at the 40-yard line, and just like the first half on their first possession, the Black Bears got a big play that was highlighted by a run to the Cougar 4-yard line by Marcus McMillan. He got the call on the next play and put it over the goal line to make the score 12-7 Black Bears.

The Cougars came right and marched inside the Black Bear 40- yard line. A big run by Dustin Brown got it to the 20, and a face mask penalty against Harlan County moved it to the 10.

The Cougar drive stalled, and they had to punt. The Black Bears moved the ball quickly to get it down to the Cougar 20 as the defense was starting to give up some big plays, but then they stepped up and stopped the Black Bears on a fourth-and-eight play to give the ball back to the Cougars at the end of the third quarter.

The teams exchanged punts to start the fourth quarter and the Cougars got the ball back with 8:30 remaining in the game. Starting at their own 18, Jesse Rose picked up a quick three and then Johnson took off on a 64-yard gallop to the Harlan County 17, and a big change of momentum for the Cougars.

But on the very next play with 5:00 left in the game, Johnson turned around on a pitchout and no one was there, and the loose ball was recovered by the Black Bears.

With the clock on their side they held on to the ball and ran it out, and sent a message to the other district teams. They are a team to be reckoned with. The Cougars had several chances inside the red zone on a couple of occasions, but they shot themselves in the foot all night with a penalty or a turnover.

The Cougars could have been looking to the big match-up with Whitley County coming up next, and overlooked the Black Bears, but regardless they are 1-1 in the district and are now in a must-win situation to have a shot at winning the district.

The Cougars put up 211 yards of offense against Harlan County with Logan Johnson picking up 164 of those on the ground on 12 rushing attempts. The passing game was held to 23 yards by a stubborn Black Bear defense.

The Cougars will have to dig deep to come out with a win at Whitley County, but they should be good and mad after the Harlan County game and it should be a battle.