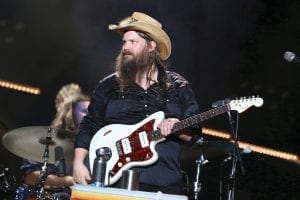 Chris Stapleton was photographed this past summer performing at the 2018 CMA Music Festival in Nashville. Stapleton’s “Broken Halos” is nominated for single of the year and song of the year for the Country Music Association Awards. (Photo by Laura Roberts/Invision/AP)

The Country Music Association Awards tend to be fairly predictable as far as winners go, but could this year be different? Can the new class of country artists upset the longtime favorites on Wednesday? The well-researched music writers of The Associated Press weigh in on predictions.

Chris Stapleton is the top contender with five nominations, but beyond that, the field is widespread. Nine other artists all have three nominations each, including Chris Janson, Dan + Shay, Midland and Thomas Rhett.

The show, hosted by Brad Paisley and Carrie Underwood, airs live on ABC from the Bridgestone Arena in Nashville, Tennessee.

KRISTIN HALL: Jason Aldean was on the stage during the nation’s worst mass shooting last year in Las Vegas. He has become a symbol for recovery for thousands grieving over the past year and brought together the country music community.

MESFIN FEKADU: Where my girls at? Truly bummed to not see a female or a group with women in this epic category. But I digress. Yes, Kristin, you’re right about Jason, he is a brave soul and he had another great year in country music. However, I think it’s time the CMAs give this honor to Chris Stapleton, who has been a beast in this music industry ever since he had his breakthrough moment on the CMAs stage in 2015. And before then, he worked tirelessly behind-the-scenes and now is the time for the country music world to truly highlight his artistry and hard work.

FEKADU: Kacey Musgraves not only had the best country album of the year, she is in the race for the BEST ALBUM OF THE YEAR. Maybe the BEST ALBUM OF ALLTIME (said in Kanye voice). OK, I am kidding about the last one. But seriously, “Golden Hour” is truly a beautiful, warm and special album that shows Kacey’s growth and natural ability to take on new sounds. She deserves this award.

HALL: Kacey’s creativity really shines on this record and it would be great to see the sole woman in this category win this award. But I am not going with the safe bet, which would be Stapleton winning this category a second time in a row. Thomas Rhett put out a truly personal album about his rise to fame, his social media-famous family and his life, and he did it his way by incorporating all the styles and genres he loves. It’s not a traditional country album, but his songs connect with people and that’s important.

SINGLE OF THE YEAR: “Broken Halos,” by Chris Stapleton; “Drinkin’ Problem,” by Midland; “Drowns the Whiskey,” by Jason Aldean featuring Miranda Lambert; “Meant to Be” by Bebe Rexha and Florida Georgia Line; and “Tequila” by Dan + Shay.

HALL: I can’t help myself but to sing along to “Meant to Be” every time I hear it. But “Tequila” is equally catchy and invokes a sense of place and the feeling of a lost love. In a contest of earworms, I prefer the songcraft of “Tequila.”

FEKADU: I think I got drunk just reading the nominees. I know some discredit “Meant to Be” because they feel it’s really a pop song, but you can’t deny its massive success and worldwide appeal. I think because it’s such a monster hit — it’s probably sold more records than the other four nominees combined — it will win here. Plus, after years and years of trying, the song will give Florida Georgia Line its first Grammy nomination of their career when they are announced next month.

FEKADU: Chris Stapleton has won this award the last three years and nothing changes on Wednesday night.

HALL: Can the CMA just give the award to Stapleton early in the show? No one wants to be the guys going up against him in this category, but for the sake of argument, Luke Combs has shown himself to be a great young singer who has a lot of power in his voice. If anyone can unseat Stapleton, it might take this humble newcomer that has won over a lot of fans.

HALL: Maren Morris is like the little engine that could. She simultaneously hit the country charts with “Rich,” crossed over to pop/ EDM with the Zedd collab “The Middle,” and toured with Niall Horan. She’s everywhere!

FEKADU: If I were voting, Maren would definitely have my vote! But since 2006 this award has only gone to Carrie and Miranda (with the exception of Taylor Swift winning in 2009). And I don’t think the CMAs will switch it up, and Carrie will take this one home.