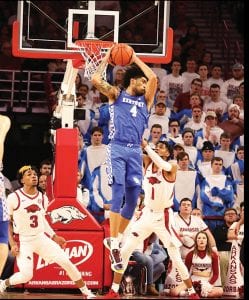 Nick Richards is leading UK in scoring, rebounding, blocks, shots made and field goal percentage and is putting up numbers like no one since Anthony Davis did eight years ago. (Vicky Graff Photo)

Could Kentucky look overseas again to add a player to its 2021 recruiting class?

All-American punter Max Duffy came to Kentucky from Australia as a sophomore and has been sensational. West Virginia signed cornerback Jairo Faverus of the Netherlands in December and has a commitment from Swedish tight end Victor Wikstrom for next year.

Now Kentucky might be looking at 6-1, 220-pound linebacker Alexander Nordgren of Sollentuna, Sweden, who is regarded as one of the top prospects in Europe because of his size and speed.

“It is still quite early in the process. I’ve talked with a few coaches here and there, but hopefully in the future I will expand my number of contacts more and the relationships will get better,” Nordgren, who did not want to say which schools had reached out to him, said.

Nordgren started playing football about six years ago. He noted about 15 years ago football was “quite big” in Sweden before losing momentum but is now getting more attention. He was on the team that won the silver medal in the under 19 European Championships.

“At the age of 11 me and my dad went to my first football practice,” Nordgren said. “I was able to give one of the guys a really hard hit.”

He was a former soccer player and was not sure how that would go over.

“Instead, the trainer shouted, ‘Wow? Great hit, Alex.’ I immediately felt that this is my sport,” Nordgren said.

He’s now attending a school funded by the National Sports Association with 29 other athletes ages 16 to 19 that he compares to a mini college campus where he lives to train and study and then comes home on weekends.

“I love to train and compete and I am really eager on working on all the ‘small’ details to try to reach perfection. I have a really hard time giving up. I believe that if you continue to try and develop yourself and try to take different angles to approach your tasks, it will sooner or later lead to you accomplishing your goal. If you ask my family or friends they will probably say that my drive, effort and passion to improve myself is what separates me from others,” he said.

He tried ice hockey and then basketball at age 9 and played until quitting one year ago to devote his time to football where he has now played almost every position. He plays linebacker and special teams for the national team and his school games, but he’s been used at quarterback, running back and receiver in club games.

He watches a lot of game tape to help him recognize what the offense might do.

“Being able to read and stop the opponent is the best feeling. A big hit is cool, but the fewer inches the opponents get, the better. I am usually good in reading/creating havoc/disruption and bringing down the opponent and I’m a good sideline to sideline tackler,” Nordgren said.

He knows earning a Division I scholarship is not easy based on what he saw when he got invited to the Bret Cooper Junior All-American Bowl in Dallas after his 2015 season.

“What a difference in power and speed. Me and my dad got shocked. It was really an awakening call,” Nordgren said of the bowl experience. “I decided when I came home that I really need to step up in every aspect. I started to work out early in the mornings before school and in the evenings.”

He searched for training tips, best ways to recover and what he should eat anywhere he could find them, including YouTube.

“My dad wanted to send me to IMG (Academy) in Bradenton, Fla., the summer of 2016, but I said no, ‘I need one more year of training.’ I went there summer of 2017 instead. I had a great time there and I really impressed the coaches,” Nordgren said.

He knows it won’t be easy to show Division I coaches he can produce for them. It’s also an eight-hour flight from Sweden to the United States but he’ll be back in the U.S.A. in June to attend various Division I summer camps.

“I am blessed. My mom is really supportive. She helps me with everything and supports me through all the tough times life can throw at you. My dad has a really competitive spirit with lots of focus on the details and always tries different angles to achieve the goal. He has been my best workout partner and he pushes me every day,” Nordgren said.

Duffy was trimming trees before the got his chance to play at Kentucky. Nordgren likes to spend time in the wilderness, too. “I like fishing, hiking, camping. It brings a form of calm to me that really helps with clearing out my mind and relaxing from all the stress the hours of training puts on my body,” he said.

So maybe it is a long shot he will stay on UK’s recruiting radar with the way the Cats have recruited, or maybe he’ll be the next hidden gem that Vince Marrow and UK coaches find.

Nick Richards has scored in double figures the last eight games — UK is 7-1 in those games — and averaged almost a double-double — 17.6 points and 9.8 rebounds — in that span.

Here’s an even more amazing statistic about Richards from Shawn Smith of gobigbluecountry.com. Richards has now had four games with at least 20 points, eight rebounds and three blocks after getting 25 points, 14 rebounds and four blocks in the win at Texas Tech. The only other John Calipari player at UK to do it more is Anthony Davis, the best player in the nation in the 2011-12 season when UK won the national title. He did it eight times.

“Nick Richards from last year — and I’m going to go back to last year instead of talking about now — he’s not playing against an opponent,” Kentucky coach John Calipari said. “He stopped playing against the opponent as a freshman. Going into his sophomore year, he was playing against Nick.

“It’s mental. There’s nothing more skill wise (he needs). He can shoot it, he can catch the ball, he’s got a left hand, he’s got a right hand. One of the hardest things to do in this game as a post scorer: the Kareem Abdul-Jabbar skyhook. Well, I’m watching him and we’re working on running hooks across the lane. I’m seeing it with either hand.

“I’m seeing him become confident in shooting 15-, 18-footers. I’m seeing him get offensive rebounds. So, it’s mental. It’s not a moment. The moment happened last year.”

“Everyone has their own story. Over the past three years, I’ve had the best time of my life,” Richards said after the overtime win at Texas Tech.

Others are noticing, too.

“Nick Richards is playing as well, or maybe better, than any big in the country,” ESPN analyst Jimmy Dykes said.

Kentucky coach John Calipari couldn’t have been surprised when ESPN picked Auburn for its GameDay location Saturday when the Wildcats visit.

This will be the first time Auburn has hosted GameDay, so obviously that will only make the crowd even more enthusiastic for the Wildcats. Of course, Kentucky is getting used to that after winning at Georgia, Arkansas and Texas Tech in the past three weeks.

Calipari felt Texas Tech was one of the “best environments” UK had faced and UK won in overtime.

“The Arkansas environment, the Georgia environment, the South Carolina environment — I mean, everywhere we go is that way. This is what we need as a team. I’m trying to empower them. If someone’s not giving it, as a team they’ve got to come to me and say, ‘You’ve got to get him out, Coach.’ That’s when I know, instead of me having to drive doing these kinds of situations, they’re doing it themselves,” Calipari said.

The departure of defensive line coach Derrick LeBlanc didn’t create much of a reaction from Kentucky football fans but Arkansas fans and players certainly have been excited about his arrival.

Looking back at what UK did defensively during LeBlanc’s two years on staff, maybe his presence could be missed more than some anticipate since UK has had one of the SEC’s better defenses the last two years.

Last season UK defensive linemen had 18 of the team’s 33 sacks with Calvin Taylor leading the way with 8.5, second best in the SEC. LeBlanc’s line had 37 tackles for loss. In 2018 the defensive front had 23.5 tackles for loss and 9.5 quarterback sacks — both major increases from 2017 when the line had no senior starters.

Talk show hosts Lee Cruse and Hayley Harmon will make their return to television Feb. 17 with “The Lee and Hayley Show” weekdays on WTVQ (ABC 36) at 4 p.m.

Both were popular hosts on WLEX-TV in Lexington before Cruse was let go by the station and then Harmon resigned a few months later.

“They have welcomed us with open arms and we have complete creative control of our show now,” Cruse said. “The great thing is we own the show and work for ourselves and can determine the direction of the show.”

Harmon says the two have fun together and she feels “blessed” to be back on air.

“We kind of went through hell on earth but I firmly believe this is the best thing that could have happened,” Harmon said.

They have plans to be at the SEC Tournament in Nashville March 12-13.

“We have plans to travel more around the state and will definitely be at the SEC Tournament where our viewers will be invited to come hang out with us. I love sports. Hayley is a Tennessee fan, but we’ll deal with that,” Cruse joked.

“We are not sure about the location yet, but it will be live in Nashville those two days. Just watch our social media pages for the location as the time gets closer.”

Quote of the Week: “Our veterans have to be good. You look across the country and you see all these teams, there’s not a lot of wiggle room for anybody. Nobody’s more talented than anybody else. We say this every day: We can beat anybody or we can lose to anyone. Well, if you’ve got sophomores and juniors — for us, at Kentucky, that’s veterans,” assistant coach Kenny Payne on what can make UK a national title contender.