Coumadin is effective but bothersome drug 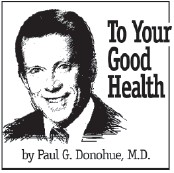 DEAR DR. DONOHUE: For the past eight months, I have had a heart rhythm problem. I am on Coumadin. One day I forgot I had taken it and took another dose. My blood test showed that I had taken far too much. You wrote about ablation being a treatment for rhythm problems. Would it benefit me, and could I go off Coumadin? — W.K.

ANSWER: I’m sure your rhythm problem is atrial fibrillation, a common and serious heartbeat disturbance where the heart beats rapidly and irregularly. One consequence is a drop-off in the amount of blood pumped by the heart. The second, and the more dangerous consequence, is the formation of clots in the upper heart chambers because blood in those chambers isn’t moving — stagnant blood forms clots. Clots in the heart can be swept into the circulation and to the brain, where they block a brain artery. The result is a stroke. Coumadin prevents those clots from forming.

Many times, the goal in treating atrial fibrillation is only to slow the heart so that it pumps out an adequate blood supply.

Are there other ways of dealing with this rhythm problem? Yes. Ablation is one. It involves eliminating the heart tissue generating the abnormal rhythm. It’s done by inserting a thin tube that’s outfitted to deliver radio waves to the specific heart sites from which the abnormal beating arises. Does it sound simple to you? It isn’t. It’s very intensive work, and requires special training. Generally, ablation is restricted to those younger than you, but not always.

I’m on your side when it comes to taking Coumadin. It’s a bothersome drug, requiring frequent blood tests to be sure that enough drug is taken but not too much. Too much poses the danger of bleeding.

Talk with your doctor about having a consultation for ablation. The doctor might side with you, or tell you that you’re not a candidate for the procedure. At least you’ll have the satisfaction of having tried.

The booklet on heartbeat abnormalities, including atrial fibrillation, discusses them, their significance and their treatment. Readers can obtain a copy by writing: Dr. Donohue — No. 107W, Box 536475, Orlando, FL 32853- 6475. Enclose a check or money order (no cash) for $4.75 U.S./$6 Canada with the recipient’s printed name and address. Please allow four weeks for delivery.

DEAR DR. DONOHUE: I think my husband is an alcoholic. He drinks far too much. He’s not abusive, but his consumption of alcohol is more than a six-pack of beer a day, and sometimes whiskey. He usually falls asleep in a chair. My sister tells me the cage test can diagnose alcoholism. What is it, and where can he get it done? He won’t talk about these things to me. — C.L.

Readers may write Dr.
Donohue or request an order