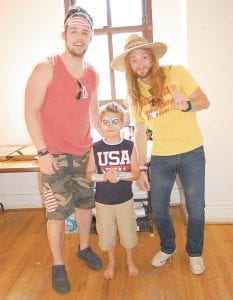 Six-year-old Peyton Hammonds posed for a photo with Nick Jamerson and Kris Bentley of Sundy Best on July 4 at Whitesburg City Hall. Peyton, a son of Robert Hammonds and Brandy Schweitzer, both of Whitesburg, had his face and arms painted to resemble an American bald eagle. Mayor James Wiley Craft said the city’s July 4 celebration, with fireworks and a concert headlined by Sundy Best, drew the largest crowd on record to River Park. (Photo by Sally Barto)

The Whitesburg City Council took action Tuesday night on one motion concerning establishments that sell alcohol, but declined to take any action on a second.

Council Member Robin Bowen Watco introduced both motions at the council’s July meeting. Her first motion, which died without a second, called for the removal the alcohol tax on food purchases for patrons who aren’t drinking in restaurants that serve alcohol. The second motion was to direct Whitesburg Police Chief Tyrone Fields to instruct his officers to remove anyone still on city streets after the restaurants close.

Fields told the council that since the beginning of the year, he has directed city officers to make certain no one loiters on city streets after closing time. Councilman Larry Everidge said he felt that since Fields had already taken action on the matter, no motion was necessary. But the motion had been made and seconded and the vote to approve it was unanimous.

In other business, the council learned the city will soon take possession of the old Salyer Radio & TV building on Jenkins Road behind the Appalachian Law Center. Mayor James Wiley Craft said he signed a document earlier Tuesday to acquire the building from the Comcast cable corporation, which has agreed to donate the building to the city to be used as the city sees fit. Craft told the council that when he receives the deed, he will need its approval in order to complete the process.

Water Maintenance Director Chris Caudill told the council that the water line at Ermine is still holding together and added that he has asked several contractors for estimates for a bore under the Kentucky River, but has only received a reply from one contractor. Mayor Craft said he has spoken with representatives of Kinzer Drilling and they are working with the city to see if H20, a contractor who does a lot of work for Kinzer, might be willing to donate the cost of the bore to the city.

Craft praised the efforts of city workers and City Hall staff for the city’s highly successful July 4 celebration, which he said attracted the largest crowd on record for a celebration at River Park. Craft said the entertainment, headlined by Lexington-based country rockers Sundy Best, was superb and that everything went very well.

Craft reminded the council that Kids Day will be held in Whitesburg at River Park on July 25 and that school supplies will be given out at that time.

Craft also thanked Mayking resident Phillip Bentley for the donation of a “deacon’s bench” to the city for use in the council chamber. Craft said Bentley, who he called the city’s “unofficial historian,” had informed him that the benches in the council chamber had all come from the old stone county courthouse, as had the deacon’s bench he donated. Craft said that after the deacon’s bench is stripped and refurbished it will be placed alongside the other benches.

The council voted unanimously to approve requests for two 5K Runs to be held in Whitesburg, one for the Cowan Dance Team on July 19 at and the second for Whitesburg Pee Wee Football on August 16.