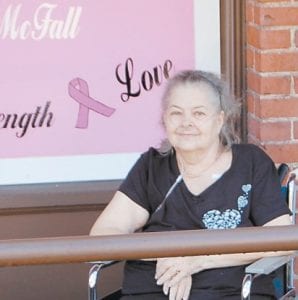 Funeral services were held Sunday for a Whitesburg City Council member who died Friday at the Hazard hospital.

McFall was elected to the Whitesburg City Council in 2006 and was in the middle of serving her third two-year term. After McFall was diagnosed with breast cancer, she continued to serve on the council and work at Leslie Knott Letcher Perry (LKLP) Community Action Council transportation.

“She was always upbeat and smiling, even during her tremendous illness,” said Williams. “She always had a kind word.”

“I think she was a mighty fine person,” said Bates. “She loved this city. She did a wonderful job on the council trying to help the city.”

Whitesburg Mayor James W. Craft said McFall was pleasant to work with and was cooperative and understanding with city operations.

“She was a wonderful human being and an extremely conscientious city council member who had the best interest of all people in the city at heart and kept that at all times,” said Craft.

Robin Bowen Watko said McFall was a tenderhearted person with a great personality.

“ Freda was a special friend,” said Watko. “She was a real joy to work with. She loved serving as city council woman. And she will be greatly missed by all.”

In addition to serving on the city council, McFall was a member of the American Legion Ladies’ Auxiliary, the Red Hat Society and the Cowan Homemakers Club.

McFall was the daughter of the late James Carlos and Virginia Pearl Triplett Brock.

She was preceded in death by two brothers, Larry Brock and Kerney Brock, and a sister, Virginia Johnson.

Letcher Funeral Home had charge of arrangements. Burial was in the American Legion Cemetery in Whitesburg.

Craft appointed McFall’s sister, Sharon Sexton, to finish her term on the city council, which concludes at the end of 2012.