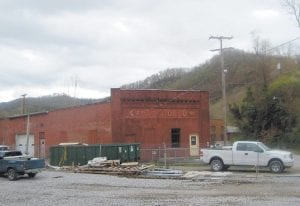 The KYVA Motor Company building is seen in this photo taken Monday. Built in 1934, the building is listed on the National Register of Historic Places. The Whitesburg City Council voted last week to give its approval to a plan to raze the building and replace it with a modern office building. (Photo by Sally Barto)

The Whitesburg City Council has voted to voice its support for the demolition of a historic downtown building which once housed the city’s first automobile dealership.

The council voted five-to-one at its April meeting last week to support the Letcher County Conservation District’s bid to demolish the 84-year-old KYVA Motor Company building and replace it with a modern office building that would house the conservation district’s offices and meeting room.

Councilman John Williams cast the lone no vote. The measure was also opposed by Mayor James W. Craft, who has been fighting to protect the building for nearly two years.

Williams said he had wanted to vote in support of the Conservation District but could not bring himself to vote to destroy a building which had been in Whitesburg since he moved to the city in 1963. Williams said he wants to see progress but believes there should be an alternative to destroying the building, a brick structure located on Madison Street.

The council’s vote comes nearly two years after Mayor James W. Craft declared a moratorium on the issuance of a work permit that would have allowed contractors to begin tearing down the building. Craft issued the moratorium on May 23, 2007, after learning the Conservation District’s board of directors had already placed an advertisment calling for bids for the demolition.

What, if any, effect the council’s vote might have on Craft’s moratorium remained unclear this week. Craft said he has been contacted by an official with the Kentucky Heritage Council/State Historic Preservation Office who told him the Conservation District is still a long way from meeting the requirements the National Historic Preservation Act of 1966 says are necessary before a historic building can be razed.

Built in 1934, the KYVA building is one of several downtown buildings that were placed on the National Register of Historic Places in October 2006 as part of the Whitesburg Historic District listing. The National Register is an agency of the United States Department of the Interior.

At least four citizens, including three who live in Whitesburg, attended the meeting to speak against the building being torn down. No member of the Conservation District’s board of directors lives in Whitesburg.

Whitesburg architect Bill Richardson told the council that the city is unique in eastern Kentucky for having been able to keep most of its historical places intact and that the downtown particularly benefits from that. Richardson said the loss of the KYVA building would be similar to the loss of the old Commissary Building in Jenkins which was torn down to make room for a Rite-Aid Drug Store.

Richardson said 84 buildings in Whitesburg are listed on the National Register, with the KYVA building being one of the most historically significant buildings in the county as the home of Whitesburg’s first automobile dealership. Richardson said he believes the building could be made into a remarkable resource if it restored to its historical façade.

Whitesburg businessman Joel Beverly said he would like to see the Conservation District move its offices downtown, but doesn’t believe that tearing down a historical structure is the way to proceed.

Whitesburg resident Marsha Banks also spoke and asked the council to remember the historical buildings already lost in the city. Banks said losing the city railroad depot had taken a very important historic structure out of the city. She said that while she also supports the Conservation District, she is against tearing down the KYVA building.

Tyler Ward, who lives at Sandlick, said he attended Centre College in Danville where a similar conflict had arisen over preserving historical buildings. Ward said Danville’s leaders decided to preserve the town’s historical integrity and now are glad they did.

Brunty told the council that renovating the building to preserve its historical integrity could cost considerably more than the district has to spend. He told the council that in addition to $9,500 appropriated by the state every year, the district’s remaining annual budget is funded by an annual county tax which averages $59,000. He said the district currently has $130,000 with which to pay for the demolition and construction of a new building. He said the district could finance another $151,000 to meet the projected cost of $281,000 for a new structure.

Brunty told the council he appreciates the historical nature of Whitesburg’s downtown area, but said the city also has a number of old buildings in various states of disrepair.

“Appalshop looks like a rusted old barn that’s about to fall down,” said Brunty. “The cedar isn’t holding up and it’s not pretty.”

Fowler said the decision should not be seen as a precedent for how the council will handle other historical buildings in the city. Fowler said he believes the Conservation District mishandled the acquisition and proposed demolition of the building at every step.

In other business, the council voted to approve a resolution naming the new Allied Health Building at the Whitesburg campus of Southeast Kentucky Community and Technical College in honor of Neon businessman and former Letcher County Sheriff Maynard Hogg. Eugene Meade, director of the Whitesburg campus, said Hogg and his family have given more $250,000 to the college. The city owns the building. The council also approved the college’s request to have a day set aside in honor of the Hogg family.

Mayor Craft reported to the council that Veolia water company’s current manager, Jeff Kilgore, has been promoted by the corporation and will be replaced locally by Todd Adams. Craft said the city could not have made it through its recent water crisis without Kilgore and others from Veolia and said the city will miss him.

Adams told the council that work on rehabilitating water lines on Fields Cliff is going well. Adams said that 340 feet of six-inch water line and 300 feet of two-inch line have already been installed at Fields Cliff. Adams also told the council that as soon as a new pump is delivered, work will begin on a project to increase water pressure to Solomon.

Acting in his role as chairman of the city’s Police Committee, Council Member Jimmy Bates announced that Acting Chief Phil Slone has been promoted to Chief of Police. Bates complimented Slone on the appearance and demeanor of the department.