Country Gentleman’s voice is heard around the world 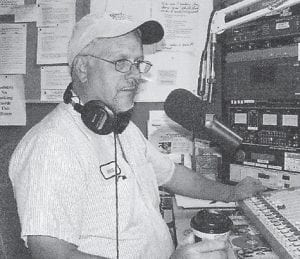 The “Cumberland Sunrise Show” on Whitesburg’s 88.7 FM radio is a breath of fresh air to early morning risers.

Who wants to get out of bed at 5:00 in the morning while the chickens are still on the roost? Certainly not I, but I and many more like me did it for most of our careers. At an hour when most of us would like to roll over and catch a few more Z’s, the Country Gentleman a/k/a Ancil Trivette is already at work with a friendly voice laced with jovial banter joking with his invisible radio audience.

To listen to him, you would swear there is someone in the studio with him. He doesn’t have time to get lonesome with the phone calls coming in at the rate of one every five minutes.

“It’s not unusual to get 40 calls or more during my 2 1/2 hour show,” says Ancil. “My listeners have got pretty good timing; they wait ’til I start a CD to call, that way they know they’ve got three to four minutes to talk with me before I go back live. My listeners vary from those at home to those on the road and those on the job. Many midnight workers from truckers in Pike County to bulldozer operators in Perry County use their cell phones to call and request their favorite artists or favorite song. With hundreds of CDs stored on my computer and hundreds more on the shelf, I usually come up with something to please them.”

One would think the show would have a very small listening audience considering it is from a tiny non-commercial radio station in the tiny mountain town of Whitesburg, Kentucky, broadcasting at a relatively low 15,000 watts.

“The 15,000 watts gets out there like 50,000 watts because our antenna on Pine Mountain is located on the second highest point in Kentucky. Many of our listeners report picking up the 88.7 kilohertz while traveling in a 50-mile radius of our station. To reach a greater audience, we have eight translators that change the frequency and pump the signal out even farther. Our broadcast reaches all of eastern Kentucky, southwest Virginia, part of West Virginia and northern Tennessee. Now that we are on the worldwide web, the signal goes around the world,” says Ancil. “I have had phone calls from every state of the union, even Hawaii and Alaska, and many foreign countries. It is not unusual to get calls from Germany, Sweden and Australia. Recently, I got a call from a couple homesick soldiers in their Army barracks in Baghdad, Iraq. Needless to say, that was a very heartwarming experience for both parties.

“When I get out of bed at 3 a.m., I know that I have only two hours to make the transformation from Ancil Trivette to person to Country Gentleman the radio personality,” says Ancil. (For those who know him personally and professionally, the transformation is in name only. The personality is always the same.) “I eat breakfast at the Deane Dairy and get a large coffee to go. As I’m driving to the station, I’m thinking of the CDs I will play during the first hour that I devote to classic country and the second 1 1/2-hour segment where I play bluegrass music. You can’t go wrong playing George Jones or Johnny Cash on the country segment, and after nearly 60 years in the business Ralph Stanley is still the most requested name in bluegrass music. After I spin a couple CDs, my audience writes the script for the rest of the show.

“When I began doing this show three years ago, I didn’t have any kind of a moniker until one morning a nice lady called in and said, ‘You have a nice country voice and you sound like a gentleman.’ From that time I became Country Gentleman. I like that,” Ancil said with a satisfied smile.

“This is my first radio show; it is something I’ve always wanted to do. My nephew, Nolen Hall, has been a DJ at a radio station in Salyersville for 38 years; I guess I envied him a little bit. When this opportunity came around I grabbed it. This late in life opportunity may not come around again. The job is very gratifying when I think of the thousands of people who make me a part of their morning ritual. It’s good to know that I can play their favorite music and crack a few jobs to liven up their day and maybe take their mind off their troubles.

“Some say that bluegrass music is depressing and that there are too many sad songs, but I try to mix it up with lively and humorous music along with the nostalgic. Right here in eastern Kentucky and southwest Virginia we are in the heart of bluegrass music. Within a 50-mile radius there must be 50 real good bluegrass bands. All try to develop a unique style but most all are influenced by Ralph Stanley and the Clinch Valley Boys. Many of my listeners call in with warm, tender words of how this show brings back wonderful memories. That makes me feel good,” said Ancil with a smile.

“In addition to playing people’s favorite music, the ‘Cumberland Sunrise Show’ provides a venue for musicians to promote their music. After a recent live appearance on the show, singer/songwriter Mike Havens called back a few days later and said, ‘Country Gentleman, I just want to thank you; since I was on your show promoting my latest CD, I have sold 125 copies.’ Those kind words make it all worthwhile, just knowing that I helped someone realize their dreams. I also have a lot of people on my show promoting their civic work. To me, that is what public radio should be. Ked Sanders is a frequent caller and has been on my show a dozen times promoting the Cumberland Mountain Arts and Crafts Council in Jenkins. He has a terrible radio voice and the personality of a sand rock, but I tolerate him because he always bring me a fresh cup of coffee.”

Ancil Trivette was born and reared in Pike County. There were 12 kids in his family. He is number 11 and his brother, Glenn, is the youngest. Glenn is a singer/songwriter, who sings mostly gospel and classic country. They play music together occasionally.

Ancil enlisted in the Army in 1969 and took training at Fort Leonard Wood, Mo. After basic training he got into an accelerated program to become a noncommissioned officer.

“My commanding officer encouraged me to apply for the program because he said I had the mouth for it,” said Ancil. “Within a few months I went from a private, E-1, to a sergeant, E-5. I was the youngest buck sergeant on the post. They made me a drill sergeant for the new recruits coming in. I could really make them recruits jump. I guess they thought I was much older because I was a sergeant. I was probably younger than most of the men under me. They didn’t know that I was only 17 years old,” said Ancil with a laugh. “I was soon shipped out to Vietnam where I served 11 months as a recovery specialist.

“When I returned to civilian life I operated a carpentry business for a period. I am a carpenter by trade,” said Ancil. Along the way of his diverse career he served as a deputy sheriff in Pike County working for High Sheriff Fuzzy Keesee who has held the office for 30-some years. Frequently he sends out the song “Highway Patrol” by Junior Brown to his old boss.

Ancil lives at Deane with his wife, Theresa. He has a son who lives in Pike County. Aside from the radio he operates his own business and has served as a volunteer fireman since 1979. He is an author who has written one book, a genealogy book on the Trivette and Newsome families. Earlier this year he became a Kentucky Colonel. The honor was presented to him by his friend and legendary singer, Larry Fuller. On June 16 Ancil will serve as master of ceremonies at the Pickin’ on the Mountain bluegrass music show at the Little Shepherd Amphitheatre in Jenkins.