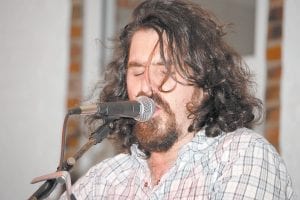 COUNTRY MUSICIAN RETURNS — Connor Christian, whose video for “Sunday Suit” reached No. 7 on the Country Music Television (CMT) Pure Country Charts, returned to Letcher County on Saturday night for his second concert appearance at Summit City. Christian recently completed a video for “3 Times,” a song from the successful album he recorded with his band Southern Gothic. Among the songs Christian performed here was “Sunday Suit,” which has been generating buzz through its appearance on the music video game Rockband. Christian is continuing a tour of southern states. (Photo by Sally Barto)