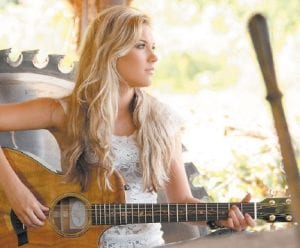 Country musician Kaitlyn Baker will perform September 24 at Getting Healthy on the Hill in Whitesburg.

The health expo, sponsored by Mountain Comprehensive Health Corporation, will feature health information booths, product giveaways, entertainment and food from 10 a.m. to 5 p.m. Baker, a Pound, Va., native, and her band will perform from 3 to 5 p.m. Also appearing will be magician Eugene Mullins.

Baker’s song “Coal Train” was included in the 2015 Academy of Country Music Awards ZinePak, a 2-CD album that also included songs by Blake Shelton, Miranda Lambert, Florida Georgia Line and others. Her single “Heart of Appalachia” was named the official theme song for southwest Virginia, and her song “To Pieces” has just been released.

Getting Healthy on the Hill will take place at the former Whitesburg High School, located on the bypass in Whitesburg. Pine Mountain Outfitters will supply gifts to be given away at the health fair including two Jamis Explorer bicycles with accessories, a Perception Tribe 9.5 kayak with accessories, two adult multi-day backpacks from The North Face, and two adult 20-degree sleeping bags from The North Face.