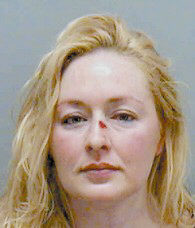 McCready after her arrest in Lee County, Fla. (AP)

Mindy McCready was back in jail last week, accused of violating probation on a 2004 drug charge after a scuffle with her mother and authorities in Florida.

The 31-year-old country singer was taken into custody July 25 at Nashville International Airport and booked into the Williamson County jail just south of Nashville.

She was arrested two weeks ago in Fort Myers, Fla., her hometown, on misdemeanor charges that she scratched her mother on the face during a scuffle and resisted sheriff’s deputies. A hearing on charges of violating her probation is set for Sept. 7.

Deputy District Attorney General Derek Smith said McCready violated probation in three ways: by being charged in a new offense; not reporting those charges immediately to her probation officer; and by the nature of the new assault charges.

She could serve up to three years in prison if convicted of violating probation.

Her previous attorney, Lee Dryer, said he doesn’t know if McCready has a new lawyer. He withdrew in June after filing a petition saying the singer had failed to meet “contractual obligations” or effectively communicate with him.

“I wish her well, and I hope she comes out of this OK,” he said.

McCready was on probation after receiving a suspended three-year sentence for obtaining the painkiller OxyContin at a pharmacy in 2004 by getting a prescription in another person’s name.

Still pending is another probation violation charge against McCready resulting from a drunken driving arrest in May 2005.

McCready had a hit in 1996 with “Guys Do It All the Time,” but has struggled in recent years amid personal problems.

She was found not guilty of the DUI charge in July 2006 but guilty of driving on a suspended license. She then pleaded guilty to violating her probation but has petitioned to withdraw that plea.