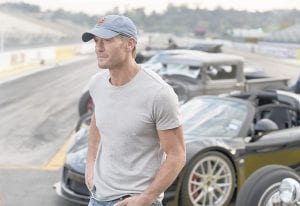 Tim McGraw drives in the carpool lane most days instead of pushing 100 mph with the windows rolled down and hair pulled back.

“I drive the Griswold family cruiser,” McGraw said, laughing. “I drive a 10-year-old Cadillac Escalade because I’m always taking cheerleaders to practice and picking up tennis players and track runners.”

But even one of country music’s biggest stars needs to cut loose on the open road — or, a private track — every now and then. So McGraw, a noted car enthusiast, traded his cowboy hat for a New York Mets baseball cap during some spins in the Usain Bolt of cars that push the limits in land speed records.

McGraw was a natural fit to participate in the hot rod documentary “Breaking Barriers,” set to debut May 7 on the National Geographic Channel. The film traces the men who have tried to break the land speed record, including the recent high mark of 270.49 mph set in February by the Hennessey Venom GT’s run on the 3.22-mile landing runway at the Kennedy Space Center in Florida.

“That car does not like to go slow,” John Hennessey said at the film’s premier in New York.

The Venom GT topped the two-seat sports car mark set by Bugatti’s Veyron Super Sport in 2010. The film interviews and shows classic footage of land speed pioneers like Craig Breedlove and Andy Green as they chase the kind of blistering speeds not even hit in the Indianapolis 500.

Those are the kinds of speeds that dance around the minds of every speed freak and car lover.

“Every young person that gets a car wants to know how fast you can go,” Indianapolis 500 winning owner Roger Penske said.

McGraw took a turn in a Venom GT Spyder that belonged to Aerosmith lead singer Steve Tyler at the Auto Club Raceway at Pomona for the shoot.

“As a guy growing up in Louisiana, a car represents so much to me,” McGraw said. “It represented freedom. It represented getting laid as much as anything. To be there with these innovators, these guys who took these vehicles and they made them into something really special, something unique and something powerful, it was really quite an experience.”

“So fast that I had to sell it because my wife (Faith Hill) wouldn’t let me drive it anymore,” McGraw said.

Wearing a Mets hat in the Pennzoil- backed film just his like his father, former pitcher Tug McGraw, he was all smiles at the rare opportunity to take a supercharged car like onto a track.

“I love driving cars. I love going fast,” McGraw said. “If you ask me what’s under the hood and how you deal with it, then I’m lost. But I know you lay your left foot on the side and you punch at the accelerator.”

McGraw’s car collection is a bit more sophisticated than the ones found in the driveway of the average dad. He owns a 1949 Chevy pickup and a 1969 Mercedes that Tug McGraw bought with his bonus check after the Mets won the 1969 World Series.

Penske, who is featured in the film, was amazed at the advances of technology that allow cars to hit speeds once unthinkable.

“ Today, it’s rocket science,” Penske said. “In the old days, we used to do pit stops at Sebring in a minute. Now we’re doing NASCAR with four tires and a floor jack in 11 seconds.”