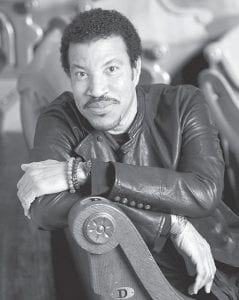 Kenny Chesney was so excited about the idea of working with Lionel Richie that he drunk-dialed the pop legend to suggest a song. Darius Rucker tossed aside a lyric sheet in the studio, saying he’d been preparing for the moment his entire life. And so many people were clamoring to get on the project that stars like Keith Urban and Brad Paisley didn’t even make the cut — this time.

It’s not surprising that a musician would consider working with Richie a dream: The Grammy and Oscar winner is considered one of music’s all-time greats, having sold more than 22 million albums over a career that has spanned nearly four decades, from his time as a member of The Commodores to his illustrious solo career. Richie has also penned classics that include “Endless Love,” ‘’All Night Long” and “Say You, Say Me.”

But the excitement over his country duets album also reflects Richie’s deep roots — and remarkable success — in the genre. Richie wrote one of country music’s enduring hits, Kenny Rogers’ “Lady,” and Conway Twitty’s take on the Commodores’ “ Three Times A Lady” became a huge country hit. In addition, Richie collaborated with Alabama on “Deep River Woman,” another song that became a country classic.

So mix Richie’s rich pop history with his country music legacy, and you can see why his return to his country roots on the new duets album “Tuskegee,” named after his hometown in Alabama, is creating such a buzz in Nashville.

“It’s kind of surreal,” said Jason Aldean, who cut “Say You, Say Me” on the album. “I mean, he was one of the biggest stars on the planet when I was growing up. And to be in the studio with him and to have gotten to be friends with him over the last year, it’s just crazy.”

Richie was mobbed on the red carpet at the Country Music Association Awards last year, he was feted and joined by Rogers at South By Southwest Music Festival earlier this month in Austin, Texas, and he’ll receive a salute from the Academy of Country Music when he appears on Sunday’s awards show (he’s also the subject of its annual television special, which airs April 13).

Richie says his multi-genre success can be boiled down to one thing — storytelling.

Chesney remembers Richie being on the mixtape that successfully won the high school student the heart of a girl. “Penny Lover” was the dominant song of the time and he was a fan of “My Love.” Chesney intended to claim the latter song immediately after deciding to join the project following a few bottles of wine.

“I just decided that I was going to call Lionel and tell him I wanted to sing on his record,” Chesney said. “It was a pretty spirited voicemail, I can tell you that, because I actually sang the verse and like half of the song of ‘My Love’ onto his voicemail.”

Richie took up the duets idea for his first album since 2009’s “Just Go.” When the California resident arrived in Nashville, to his surprise he found they still made music the way they did when he first hit town back in the early 1980s. They played their instruments live in the studio, made decisions on the fly, with no preprogrammed tracks and few preconceived notions. He felt comfortable and familiar for the first time in years. And before he realized it, he was turning the keys over to each new friend he brought into the studio, telling them to remake the song in their image.

“ The most important thing was, we don’t change the melody,” the 62-year-old singer said. “We may change a little bit of the arrangements, but we didn’t change where the crowd comes in. So, yes we changed ‘Say You, Say Me’ from this anthemic thing to a little bit of a ‘Lay Lady Lay’ kind of feel, but the crowd still knows where to come in. … I wanted to put a little thing in there where each of my guest artists felt like they weren’t copping out.”

He let Tim McGraw turn “Sail On” from a gentle letdown into something much more final. Willie Nelson somehow makes “Easy” even mellower. And with Rascal Flatts, it was about bringing even more energy to “Dancing on the Ceiling.” So he invited them to play the track, not just cut the vocal.

“I don’t know if you can even sum it up,” Rascal Flatts lead singer Gary Le- Vox said. “He’s just a musical icon and a legend. And to be able to call him friend now and to watch him work in the studio, the whole time you’re watching him work with (producer) Dann Huff and throwing out ideas and all this, you can’t help but picture ‘We Are The World’ while it’s going down.”

Richie is so pleased with the success, he’s planning a second volume with stars that missed out the first time around. And he’s so energized he’s thinking about recording new material. In Nashville, it turns out, Richie found something he thought he’d lost.

“I’m probably as comfortable in my own space and in my own skin in the music world as I’ve been in 15 or 20 years,” Richie said, “because here, they specialize in melody here. Singers, melody, stylists. Not acrobatics.”