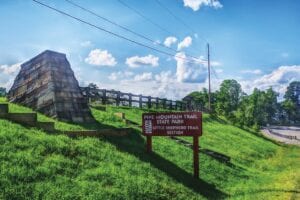 The entrance to the beginning of Little Shepherd Trail, located atop Pine Mountain near Whitesburg, is seen in this photo taken Tuesday. (Photo by Sam Adams)

With its narrow roadbed and twisting curves, combined with the magnificent vistas, the Little Shepherd Trail may soon become a nationally recognized site for auto rally racing.

And that has some people worried that what was once a peaceful path through some of the state’s most ecologically sensitive forests, might soon become unusable for nature lovers.

The first rally along Little Shepherd Trail was held August 8, and supporters say it was a roaring success. At the August meeting of the Letcher County Fiscal Court, Judge/ Executive Terry Adams asked the court to approve a second rally weekend on the trail in September, and said a number of rally sanctioning organizations have expressed an interest in the trail as a race site.

Adams said the favorable press and social media coverage the August 8 Raven Rock Road Rally received has introduced the rally world to Letcher County. Organizers have said they envision 10 races a year on the one-lane road, a fire trail and tourist avenue which connects Harlan and Letcher counties.

Adams said Tuesday that the county did much needed maintenance on the trail prior to the races, and when he traveled down the road after the race, there was no garbage that had been left behind.

But opponents of using Little Shepherd Trail for rallies say the road is lined with rare plants, and birdwatchers commonly travel the trail to see birds that migrate annually along the crest of the mountain from northern states to South America and back.

In letters to the editor and comments online, those with concerns about the rally said while they are not opposed to road rallies being held in the area, Little Shepherd Trail is not the place for it. It is an “ecological treasure,” Jennifer Honeycutt said in a letter to the editor, adding that are only seven roads that cross the mountain in 120 miles.

“As we make plans for future events it’s vitally important that we stage activities in the proper venues, ensuring that each activity we promote has the potential to generate revenue without negatively impacting the land or adversely affecting activities promoted by other groups,” she wrote. “When deciding on a venue, it’s important to involve other entities or groups that might be negatively affected by that decision, groups that have been working toward a particular goal on the land in question. It’s the fair and right thing to do.”

Dr. Artie Ann Bates, a psychiatrist from Elk Creek, also wrote a letter opposing the rally on Little Shepherd Trail, saying in part, “To lose it means to never have it again, ever. If there is one thing we learned from strip mining it is that once a mountain is destroyed there is no putting it back. The same is true of the Little Shepherd Trail. If it is turned into a racetrack, the natural life of it will be destroyed forever.”

Adams said as far as he knows, adjoining landowners weren’t consulted about the rally.

“The county owns the road, and that’s where we stayed was on the road,” he said.

One opponent to the races, who declined to be identified, said his big worry is not what the races themselves will do to the area, but what will happen between races as local young people come to think of the trail as a speedway instead of a nature trail. The Letcher County section of the trail traverses a little more than 14 miles from US 119 South near Whitesburg to KY 160 at Gordon. Kingdom Come State Park and Nature Preserve at Cumberland, where the August 8 race began, is about 12 miles from the US 119 intersection.

While that section is paved, an unpaved section picks up at Gordon and goes all the way to the city of Harlan. The next race is expected to begin at the Laden Trail in Harlan County, where ox carts laden with goods from the railroad, traveled across the mountain in the 1800s.

The fiscal court voted Monday night to close Little Shepherd Trail to regular traffic on September 18 and 19 to allow The Plenty of Tarmac Rally Sprint to be held. Harlan County Magistrate Paul Browning Jr. brought the subject of Raven Rock Rally Sprint to the Letcher County Fiscal Court at a special court meeting held on Tuesday, June 30, about a month before the event, though it had been in the planning stages for some time.

Letcher County Tourism Commission Chairwoman Missy Matthews said the first contacts for the race were through Adams, and while she was aware there had been talk about having it, she didn’t know it had been set until the court voted on it in July.

While she said she didn’t have much to do with it, she said the race appears to have been handled well and there didn’t appear to be any damage or litter along the trail. And while most festivals and other events have been canceled because of the COVID-19 pandemic, the awards ceremony in downtown Whitesburg seemed to be safe.

“It was a well-attended, but not overly populated event,” she said.

The Kentucky River District Health Department said that so far, contact tracers have not traced any cases of the virus back to the rally.

Browning said the Sports Car Club of America and the National Auto Sport Association, the sanctioning bodies for the sport, were both interested in holding rallies in Letcher and Harlan counties and that he believes it has the potential to bring tourists and tourist money to the region from all over the country. Browning told the court at the August meeting that after the Raven Rock Rally was over, he and the rally promoters inspected the course and were impressed by the respectful way the rally participants and support crews treated the trail.

Browning said that in their inspection they only found one soft drink can that may have been left by a participant and the drivers and their crews were thrilled by the challenging course and the beauty of the area. Judge Adams said he had also checked out the site and hadn’t found any trash. Adams and Browning agreed there was no damage to the road, and the rally had left no footprint on the mountaintop.

Browning also said several groups have expressed an interest in running a hill climb type car race in the area, too. He said he attended one in North Carolina during August with one of the promoters, and it had a large and enthusiastic audience. He said promoters will visit the area soon to determine an environmentally friendly site. It was not clear whether they intend to have that event on Pine Mountain.

Adams said he had been contacted by representatives of NASA Rally Sport about the September dates, but he had also heard from several other sanctioning bodies about holding rallies on the trail. Both Browning and Adams said that businesses in both countries had benefitted greatly from the rally, although as Browning pointed out, the COVID-19 social distancing regulations severely limited the number of fans who could attend the race. Browning also presented the court with $400 in cash that he said the rally promoters had asked him to donate to the emergency medical technicians and the Letcher County Ham Radio Association.

Even though the second rally will be held in the middle of the Hensley-Pine Mountain Wildlife Management Area during deer season, Adams said he doesn’t foresee a problem, saying it is “just a matter of scheduling.”

“Even the rally we had up there, I saw a bear there as the rally was going on. It didn’t get out next to the road, but it was out there,” Adams said.

Mountain Eagle reporters Sam Adams and William A. Farley contributed to this report.