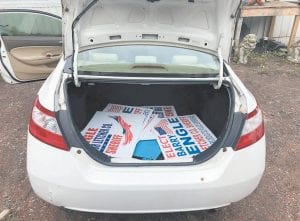 The Letcher County Fiscal Court met in special session Tuesday to received the results of the county government’s audit for the fiscal year ending June 30, 2017. They also met privately to discuss a personnel issue. The session lasted for almost 30 minutes before court members emerged and announced that no action had been taken.

Judge/Executive Jim Ward told the court that no action was taken in the audit and although while there were four findings, they had been simple clerical errors and the auditors said they were minor in nature. Ward said that what he called “accusations and lies” made against the county had caused the audit to last for six months, taking over 1,000 man hours, and it had cost over $70,000, about three times the amount of a normal audit.

Ward asked County Treasurer Doris Jean Frazier to see if the court can make at least two payments on the costs and Third District Magistrate Woody Holbrook made a motion to accept the report and to request that the payment be broken up into three parts, with a one-third payment in October. Holbrook’s motion passed unanimously.

The report also said the court’s financial statement is free of material misstatement, and compliance was tested with provisions to flaws regulations, contracts, and grant agreements. In the findings, the auditors found the county had not paid state income tax withholdings that resulted in penalties and interest of $7,078. However, at that time, the county’s state tax returns had not been completed and the money was available in the payroll account for the payments.

The auditors also found the county did not have sufficient control over the payroll process that resulted in deficiencies involving overtime that resulted in one employee being paid credit for more compensation time than he had actually worked during one work week.

Of 16 employees tested, one time card was not complete for the pay period and two were unsigned. The payroll account had a deficit of $6,711, but that was the result of penalties and interest paid to the Kentucky Department of Revenue.

The court also exceeded the line item budget to refinance the lease on the Letcher County Recreation Center. However, refinancing the lease did not actually involve the receipt or dispersal of funds from the financing agency and the county had been unaware that the refinanced portion had to be treated as a debt payment.

Both Judge Ward and County Treasurer Frazier said that steps have been taken to remedy the findings, which are mostly procedural and bookkeeping errors. Ward said that most have been corrected and he feels like the court received a good audit. Frazier said the auditors had told them the findings were material in nature, and generally minor.