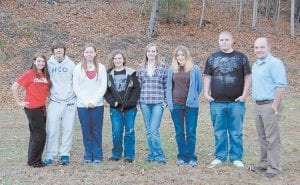 One of Jason Brashear’s favorite memories of being a 4-H agent in Bell County was watching a shy teenager transform into a confident leader who spoke in front of more than a thousand people.

Brashear, who was recently hired as a 4-H agent in Letcher County, said after a few years of engaging the teenager in 4-H activities he grew out of his shell and became the state 4-H vice president.

“We hope to be able to do the same here,” said Brashear. “My favorite thing about my job is giving kids opportunities to succeed and watching them grown into better students and better citizens.”

Letcher County has not had a 4-H agent in two years and Brashear says he is excited to revitalize the county 4-H program by visiting schools and creating various clubs to gain student interest. Horse, poultry, livestock and goat clubs will meet soon.

“We focus a lot on community service, responsibility and leadership,” said Brashear. “We will definitely be taking these kids to all kinds of places. I like to take them somewhere they have never been before and see things they have never seen.”

Brashear plans to take a group of students on a county teen retreat and also to a district teen retreat in Tennessee where they would learn how to whitewater raft.

Students will also be given the opportunity to participate in a one-week 4-H teen conference at the University of Kentucky this summer. Brashear says it has been at least six years since anyone from Letcher County has participated in the teen conference.

Students will also compete at the state fair with various projects which could include crafts, cooking, canning and educational posters.

“I like getting together and getting to know people,” said Savannah Reynolds, 15, a member of the Letcher County 4-H teen council. “I also like going to the state fair.”

Brashear also stresses self-sufficiency and encourages students to raise funds to pay for group trips. The teen council will be selling chocolate-covered strawberries to raise money for an upcoming leadership conference.

Trevor Adams, 15, who is a member of the teen council, said he has learned responsibility while being a 4-H camp counselor.

Brashear said a 4-H program can be an important part of a community because so much focus is put on community service, responsibility and leadership.

“I think it strengthens our youth in terms of leadership, citizenship and life skills through our diff erent programs and projects,” said Brashear.

Brashear grew up in Cornettsville on the Letcher/Perry County line where he was active in the Perry County 4-H program. For the past five years he has been a 4-H agent in Bell County. While there he taught a program about Appalachia.

At the end of the program he would make fried apple pies, chicken and dumplings and cornbread.

Brashear said he had about 65 percent of Bell County teens involved in the 4-H program and hopes to be as successful in Letcher County.

“I just want to really increase the visibility of the 4-H program in the county and the extension office as a whole,” said Brashear.