County health dept. is so broke it may lose headquarters 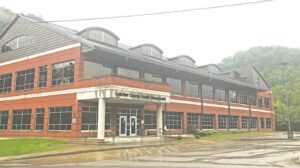 The Letcher County Health Department is in danger of losing its muiti-million dollar building located in downtown Whitesburg. The building opened 12 years ago.

An unwillingness to raise tax rates, a declining tax base, reduction in federal and state funding, and COVID-19 closures and layoffs have created a perfect storm that has put the Letcher County Health Department in danger of losing the multi-million-dollar health center that opened just 12 years ago.

Discussions are underway for the department to purchase the old Dairy Queen building just across the river for storage of records, and possibly to move some services to the Letcher County Recreation Center, though officials would not talk about that possibility.

“At the last board meeting, what I can tell you, is the health department is exploring options because the amount of taxes the public health taxing district will take in is the lowest it has received in decades,” said Scott Lockard, Director of Public Health for the Kentucky River District Health Department.

Lockard would not say what those options are, but he said the department has not defaulted on its loans. He said it was able to pay all its bills except its assessment to the district.

“We have no plans to move out of it at this time, but I don’t know what the future holds,” he said.

He said the department is “actively seeking renters” for space in the 32,000-square-foot building.

Minutes of the Letcher County Board of Health meetings, which occur only one time a year, show the district has been struggling since at least 2019, when Lockard informed the board it was facing a $183,000 deficit and recommended a tax increase. Judge/Executive Terry Adams, who sits on the board, suggested renting unused space instead of raising taxes. Adams made a motion during the same meeting to set the tax rate at 8 cents per $100 assessed value, the same as the prior year, and the board voted to accept that rate. The board has set the same rate each year since then, turning down a 9.2 cent per $100 tax rate in June of this year.

During that meeting, Lockard suggested the board cash in certificates of deposit to buy the old Dairy Queen building, and the board voted unanimously to authorize Dr. Ricky Collins, chairman of the board, and board member Dr. Debbie Williams to sign a purchase contract.

Collins, who was elected chairman during the meeting, said Tuesday that discussions on the property purchase are still underway. He said he had heard talk of a move to the recreation center also, but he has not been involved in anything about it and knew of nothing official. He referred questions to Judge Adams.

Adams said he could not comment on whether the department could move to the recreation center, which is just across the river from the Health Center.

“There’s nothing affirmative about doing anything,” he said.