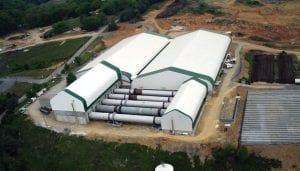 THIS PLANT IN Pigeon Forge, Tenn., composts all of the garbage from Sevier County, Tenn., including the cities of Pigeon Forge, Gatlinburg, and Sevierville. (Photo courtesy Sevier Solid Waste Inc.)

Two thousand, three hundred fifty dollars a day, $11, 740 a week, that’s how much Letcher County pays to dispose of the 50 tons of garbage it collects every day — nearly double the per-ton cost it paid 20 years ago.

Now the county has an estimate for how much it will cost to rid itself of those landfill tipping fees, if federal grants it is applying for are approved.

Gover, who was deputy judge/executive in Carroll Smith’s administration, was responsible for designing the recycling system the county operated and turned over to the city of Whitesburg two years ago. Judge/ Executive Terry Adams, who made reducing garbage disposal costs the top goal of his administration when he took over in January, asked him to come back and figure out a new system.

Adams, who had served 12 of the past 16 years as a magistrate before becoming judge, said in January that he had visited Sevier County, Tenn., twice to see the system used there. Gover said that system handles 375 tons of garbage generated by the 97,638 residents of Sevier County, Gatlinburg, Sevierville and Pigeon Forge, and the 12 million tourists that visit every year.

That system doesn’t bury garbage, it composts it in three drums that are 14 feet in diameter and 190 feet long each. After three days, the organic garbage has broken down into a compost, with recyclable materials left over that are separated and either sold or disposed of in a landfill similar to a construction debris landfill, a much cheaper alternative to contained landfills for garbage. Gover said it reduces the amount of waste to be disposed of by 70 percent.

Adams said last week that the $3 million cost of a system would pay for a “turn-key” system and would include equipment for grinding tree waste and adding it to the garbage.

“We applied for an AML grant and they didn’t fund that grant through this cycle,” Adams said.

Now the county is seeking a different grant to fund the new garbage system.

Gover, who started working for the county 25 years ago, worked for 13 years and then left for 12, said he had looked at digesters when he worked here before, but the tipping fees then were only $27 a ton, and digesters were new and unproven.

“Back then I felt it was too expensive,” he said.

Now, with tipping fees at $47 a day, the costs of building a digester are looking better and better, especially since Sevier County has so many years of experience with it, and has been so helpful in showing Letcher County officials how it works.

While Sevier County uses three digesters, Gover said Letcher County needs only one. That would allow the county to take all of the waste it collects now and still have capacity to double the amount of garbage before adding another digester. The county already has plenty of land at its old landfill, behind the transfer station where it now dumps garbage to be loaded onto bigger trucks and shipped out of the county. Gover said while some residents of Millstone already “feel like they’re dumped on” by the presence of the old landfill and the transfer station, the digester would reduce traffic by stopping the outgoing flow of garbage.

There’s still another Abandoned Mine Lands grant cycle next fall, but Gover said he doesn’t want to wait. When he took on the project, he thought it would take a year to a year and a half to get something moving, but if the county have to wait for another AML grant cycle, it could stretch to three or four years.

For right now, however, write a second grant application, this one to the Economic Development Administration.